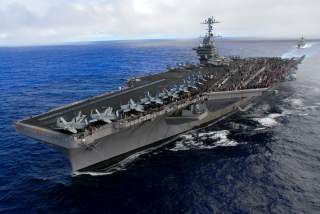 Builders laid the keel for the Ulyanovsk in 1988, just as the Soviet empire began to break apart. The ship was such a large project that builders wouldn’t have finished her until the mid ’90s. Construction took place at the Black Sea Shipyard in Ukraine—often called Nikolayev South Shipyard 444. It’s an old facility, dating back to the 18th century when Prince Grigory Potemkin signed orders in 1789 authorizing new docks to repair Russian naval vessels damaged during the Russo-Turkish War. The famous Russian battleship Potemkin—scene of the famous 1905 naval mutiny and the subject of Sergei Eisenstein’s classic film—launched from the same shipyard.