Revealed: The Old American Tank Taiwan Is Modernizing to Fight China in a War 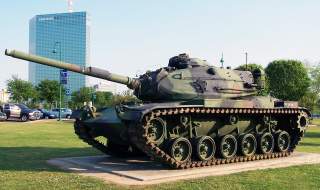 The M60 “Patton” tank is one of the most iconic tanks of the Cold War. While it did not see use in the Vietnam War, it saw extensive use by Israel and Iran in the various hot wars of the twentieth century, and comprised the vast bulk of the U.S. Army’s tank fleet facing down the Warsaw Pact throughout the 1970s and 1980s. It was also used by U.S. Marines in Grenada and Operation Desert Storm. While it was phased out of American service in the 2000s—and most other tank fleets by the 2010s—the M60 continues to serve on in some countries. Advanced upgrade packages are being added to remaining M60s in an attempt to make them adequate for today’s battlefield. Most of these packages are based on the M60A3, the latest variant to see widespread service introduced in the 1980s. Some of the upgrade packages are based on the far older M60A1 variant. This article will discuss the Taiwanese proposed upgrade package, the Turkish upgrade package that has seen combat service and the low-end Thai upgrade package.

Taiwan’s M60 upgrade is probably the most up to date. After failing to acquire M1 Abrams tanks from the United States, Taiwan is now attempting to upgrade their fleet of 400 M60A3 tanks, which are in use by the Republic of China Army and Marine Corps. In 2017, two M60A3s were transferred to Taiwanese R&D institutes for evaluation. These evaluations of possible upgrades are expected to finish in 2019, with the upgrade being implemented in 2020. The upgrade package is said to include new fire control system, turret drive, sighting systems, NBC (Nuclear, Biological and Chemical)  and environmental control systems, and what is described as an automatic loading system. It’s not clear if the package includes a true autoloader or is a semi-automatic loading system with an assisted rammer. The 105mm M68 rifled gun is supposed to be replaced with a new 120mm smoothbore, which would enable the tank to fire modern Western ammunition. Active Protection Systems are also being considered—a wise decision considering the outdated nature of the M60A3’s simple steel armor hulls. All upgrade components are to be taken from the commercial domestic market with the exception of the 120mm gun. Despite this, Raytheon is said to be in talks with Taiwan to do technology transfer of the M60 upgrade or to provide some components for it. Taiwanese sources have stated that this M60A3 upgrade package will be superior to the M1A1 in some aspects. This could be true, given that the upgrade package lists an improved commander sight as an option—the M1A1 lacks an independent, stabilized, thermal commander sight, a feature only added in the M1A2. Such sights are now common and probably included in the Taiwanese M60A3 upgrade.

The Turkish M60T, which is based on the Israeli Sabra upgrade, is the most numerous of the three in actual service. The Sabra started out as a further update to surpass the Magach 7 upgrade for Israeli M60s by Israel Military Industries. The Israel Defense Forces (IDF) were divesting from their M60s fleet in the 2000s to focus solely on the Merkava line and did not end up adopting the Sabra. As these M60s were not the M60A3 (which includes stabilization), but rather the ancient M60A1, the Sabra modernization was quite extensive. In 2006 the Sabra Mk. II package was selected, with some changed, to be the basis of Turkey’s modernized M60A1s. Like the proposed Taiwanese modification, the Sabra is based around a 120mm gun—which is a variant of the cannons fitted to Israeli Merkavas and is compatible with all NATO 120mm ammunition. The turret comes with a night thermal sight, day optical and TV sight, additional armor, two-axis stabilization, electrical drive and a laser rangefinder to replace the coincidence (whiz-wheel) rangefinder on the M60A1. However, the M60T is not equipped with an independent thermal commander sight, which limits its ability to maintain situational awareness and acquire follow up targets during an engagement. In the chassis, the American AVDS engine is replaced with a 1000hp German MTU881 diesel engine, along with an upgraded suspension and transmission. The M60T saw significant action as part of Turkey’s involvement in Syria. Additional upgrades are a result of combat experience. Additional ERA (explosive reactive armor) packages are being procured for the turret to counter more modern ATGMs (anti-tank guided missiles), an enhanced stabilization system is being procured for better shoot on the move—Turkish sources say M60Ts could not hit targets at range while on the move—and a commander independent stabilized sight is being procured. These modernizations are being undertaken under the name “M60T Firat.”

Some of the more obscure M60 upgrade packages are those for the Royal Thai Army’s M60A3s. Notably, these feature applique side armor made out of a biodegradable, lightweight, eco-friendly material: wood. Upgraded Thai M60A3s also have steel frames  mounted on their sides that can be filled with logs. Presumably, this is to prevent light anti-tank weapons—such as the RPG-7—from damaging the running gear or tracks. The effectiveness of this armor package is uncertain, as wood armor is not commonly used. Frames have also been seen attached to the turret of Thai M60A3s. The upgrade package also includes a new Israeli FCS (fire-control system), and a possible Israeli Blazer ERA package. From informational posters displayed during Thailand’s National Children’s Day in 2018, the FCS appears to offer analogous capability to the Sabra upgrade, featuring a laser rangefinder, TV Day Camera, thermals, stabilization and electric turret drive.

The Thai, Turkish and Taiwanese upgrade packages represent three different approaches to modernizing the M60. Taiwan is seeking to modernize the M60 as a frontline main battle tank (MBT). Turkey is seeking a middle ground, keeping it useful as a second-rate jack-of-all-trades tank as Ankara develops the Altay MBT. Thailand is modernizing their M60s primarily for use in COIN-type operations, while their VT-4s and Oplot-Ts are are for tank vs tank combat. The steel armor of the M60 remains a liability, but armed with a 120mm cannon, the Patton could pose a significant threat to other tanks with modern APFSDS (armour-piercing fin-stabilized discarding sabot) rounds.