The Old Backbone of the U.S. Navy's Fighter Wings Is Retiring (And the F-35 Is Coming) 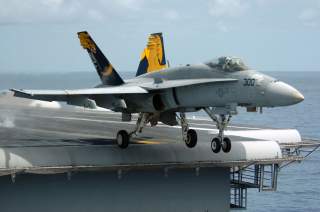 “It was a great opportunity to stop by here,” Commander Perry Solomon, VFA-34 commanding officer, said. “And say thanks to the men and women who build these airplanes. This has been the backbone of the wars we’ve been fighting for years. It’s been the real workhorse that has ensured our victories around the world.”

The squadron’s visit is a homecoming of sorts for the unit’s F/A-18C Hornets. The end of VFA-34’s deployment with Carrier Air Wing (CVW) 2 onboard USS Carl Vinson (CVN 70) marks the classic Hornet’s last deployment on an aircraft carrier in Navy service.

Over the course of the next year, the squadron will transition onto brand new F/A-18E Super Hornets coming off the Boeing production line. However, the F/A-18C/D will continue to serve with the United States Marine Corps until those jets are finally replaced by the Lockheed Martin F-35B and C Joint Strike Fighter.

“The AN/APG-73 is installed on F/A-18 C/D aircraft. The APG-73 has been subject to ongoing maintainability, supportability, and readiness issues. To alleviate these issues, the USMC is pursuing a replacement to the APG-73,” reads a FedBizOps solicitation. “Active Electronically Scanned Array (AESA) solutions are required due to the increased reliability and sustainability requirements as well as the associated capability improvements. In order to meet fleet readiness requirements, retrofit installations will begin in 4th Quarter 2020 and complete in 4th Quarter 2022, for fielding of a total of 98 systems (7 fleet squadrons retrofitted with 14 replacement radars each.”

Meanwhile, the Navy is spooling up its efforts to bring its carrier-based F-35C into the fleet. VFA-147 Argonauts started transitioning from the F/A-18E Super Hornet onto the new single-engine stealth fighter earlier this month, becoming the first operational Navy unit to fly the F-35C. The squadron is set to deploy onboard USS Carl Vinson in 2021.

It is not yet clear which Navy squadron will transition onto the F-35C next, however, the sea service hopes to field as many as 20 operational Joint Strike Fighter units by the 2030s. The addition of the stealthy new jet will afford the carrier air wing the ability to strike inside heavily defended airspace.