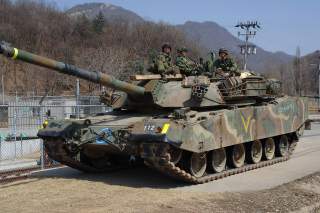 South Korea currently faces a North Korea racing toward becoming a serious nuclear weapons state and the risk of being caught in conflicts between the United States, China and Japan. Added to this mix, South Korea is a heavily trade-dependent economy, meaning that the country’s economic prospects rely heavily on international market forces, which limit South Korea’s ability to meaningfully respond to economic downturn. The rise of Donald Trump in the United States and the fall of Park Geun-hye in South Korea compound the uncertainty.

South Korea has thus far been hedging — remaining on good terms with China while maintaining a strong alliance with the United States. Implementing this strategy has meant that South Korea has sought to avoid joining certain US-led initiatives that would seriously antagonise Beijing,  such as a regional missile defence architecture (although this might change in the future). On such issues, South Korea has generally sought to avoid choosing.

But hedging may become unsustainable. As US–China competition continues to intensify, South Korea will be facing increasing pressure to choose sides from both Washington and Beijing.

One potential option for South Korea is to gradually align with a rising China while loosening its ties with the United States. But this policy relies on the assumption that China will be the next hegemon in Asia.

Given China’s slowing economic growth, internal problems and the fact that it continues to face competition with other regional actors, this outcome is not assured. China also does not share common liberal democratic values with South Korea, and Beijing is highly unlikely to help Seoul in the case of a North Korean attack, or respect South Korean interests. Siding with China would also not inoculate South Korea against losses in the event of rising US–China competition or even military conflict.

Another option is for South Korea to balance against China’s rise, together with the United States and Japan. But this could result in Seoul losing Beijing’s support altogether in dealing with Pyongyang. Moreover, if South Korea were to become the frontline state in a coalition against China, it would bear the brunt of the consequences of a US–China conflict, just as in the Korean War. There is also no knowing whether such balancing against China would succeed, but the price of failing would be costly.

Seoul could instead seek to remain neutral. But when great powers compete, they have incentives to draw a neutral state into their respective coalitions to gain advantage. Without a great power ally, deterring North Korea would also become more difficult. South Korea could acquire nuclear weapons to maintain its independence, but nuclear weapons cannot deter or defend against all types of threats. Seoul would not want to risk committing suicide by mutual nuclear exchanges to deter and defend against limited attacks. To do so, South Korea requires conventional capabilities commensurate with those of its adversaries. South Korea has the capacity to handle North Korean threats but does not have the capacity to match China.

South Korea might push to create an institutionalised security mechanism in East Asia by promoting regional peace initiatives and bolstering existing cooperative activities. Every South Korean leader since Roh Tae-woo has promoted some type of mechanism in pursuit of more effective regionalism. But proposals to this effect have failed to win sufficient support from the region’s major powers due to concerns that multilateral mechanisms might restrain their freedom to pursue unilateral actions. As long as the great powers have differing interests and Seoul lacks political, economic or military influence, forging a regional security community will be difficult.

South Korea could even seek to perform the role of networker or mediator to reduce tensions among great powers. But this strategy has problems. If any differences on issues such as the long-term US presence in the western Pacific and democracy promotion are irreconcilable then no amount of ‘network’ diplomacy will help unless one side makes serious concessions. Moreover, inter-Korean relations have deteriorated to their worst levels since the end of the Cold War, and Japan–South Korea relations have only just begun to improve. These gaps limit South Korea’s ability to be a networking power.

This is a menu of imperfect options for South Korea.

Given the magnitude of challenges it faces, South Korea will most certainly want to maintain a strong alliance with the United States even while seeking improved relations with Beijing. Effective hedging requires South Korea to make a clear assessment of issues critical to the maintenance of its US alliance, those that affect the alliance but may not be critical, and decisions that can be deferred.

And if regional relations deteriorate further, South Korea could well be pushed to balance against China. For example, increasing frictions over the South China Sea could push the United States to determine that South Korea has to do more to maintain freedom of navigation, putting increased pressure on Seoul to take a tougher stance against Beijing.

South Korea ultimately shares with the United States an interest in maintaining the liberal world order. Given the Korean Peninsula’s immediate proximity to China, South Korea would be the first to suffer if the Chinese modify the regional order in their favour. In that case, South Korea would naturally increase trilateral security cooperation with the United States and Japan and take a tougher stance against Chinese revisionism. Until then, Washington can afford to be patient.

The United States should also support South Korea’s attempts at network diplomacy and the creation of regional security mechanisms. Washington has yet to endorse South Korean cooperative security initiatives enthusiastically, but Northeast Asian stability could benefit from their better coordination.

The North Korean threat is becoming more dangerous and is a common challenge for the United States and South Korea. Both countries, despite increasing uncertainty, have to deal with an increasingly complex regional environment in Northeast Asia.

The United States cannot afford to withdraw from the Korean peninsula, and South Korea’s next president will inherit the same problems and constraints that the Park administration has faced in its efforts to solve what she called the ‘Asian Paradox’.

Scott A. Snyder is senior fellow for Korea studies and Director of the Program on US–Korea Policy at the Council on Foreign Relations (CFR). Sungtae (Jacky) Park is a research associate at CFR.

This article is an abridged adaptation of the authors’ CFR discussion paper The Korean Pivot: Seoul’s Strategic Choices and Rising Rivalries in Northeast Asia and highlights some of the main themes of Snyder’s upcoming book, South Korea At the Crossroads: Autonomy and Alliance in an Era of Rival Powers.