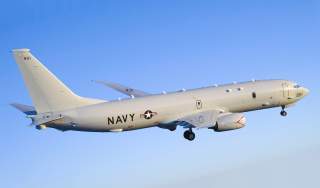 China was on everyone’s mind at the 2018 Singapore Airshow earlier this month. As Beijing’s military continues to encroach on its neighbors’ naval territories and claim international waters for itself, Pacific countries are looking for systems to monitor and secure their borders. One way to do so is airborne naval surveillance, which would allow states to accurately track China’s movements and defend themselves from potential threats.

At the Airshow, Matt Carreon from Boeing stated: "there is a requirement need out here in the Asian region for P-8s.” Interest has grown in naval surveillance aircraft like Boeing’s P-8A Poseidon and similar systems such as Saab’s Swordfish Maritime Patrol Aircraft, the Kawasaki P-1, and Airbus’ C295 MPA.

India and Australia have relied on the P-8 Poseidon to fortify their borders since it first came to market. The two countries have recently begun ramping up their inventory in response to China’s aggressive expansion. South Korea and New Zealand have been approved by the U.S. State Department to buy the P-8, and their neighbors including Malaysia, Indonesia, and Vietnam have expressed interest in acquiring maritime patrol aircraft. Systems like the P-8 Poseidon could play an integral role in securing the Pacific region from China’s overreach and against future threats.

The P-8A Poseidon is the ideal system to track and counter hostile actions in East Asia. Based on the Boeing 737 frame, this airborne naval surveillance system conducts anti-submarine warfare, anti-surface warfare, and intelligence, surveillance, and reconnaissance missions. By operating in the air, the system can be more flexible and versatile in gathering data than systems based on land or at sea.

The P-8 is equipped with multiple systems to provide high-resolution readings of ships and submarines both near and far. It employs systems such as the Advanced Airborne Sensor to provide 360-degree surveillance of land and coastal regions. Its sonar, acoustic, and hydrocarbon sensors can detect the location of submarines with startling precision. The P-8 is also furnished with technology to merge data into one “picture” that can then be shared with allied ships and planes. The Poseidon is fortified to carry weaponry such as Harpoon anti-ship missiles, Mk-54 torpedoes, and rockets.

India and Australia were the first international buyers of the P-8. Now, both countries are ordering more of the surveillance system to monitor China’s expansion into the Pacific and Indian oceans. India operates the P-8I, a modified version of the Poseidon that includes a powerful magnetic anomaly detector sensor in a tail stinger, as well as a 360-degree view AN/APY-40 radar and MK-54 torpedoes supplied by Raytheon.

Delhi purchased eight P-8I’s soon after the 2008 Mumbai terrorist attacks and bought four more in 2016. Australia first purchased the P-8A in 2007 to replace its aging fleet of Lockheed P-3 Orions. In 2016, Boeing signed a $2.5 billion deal to supply 16 P-8A Poseidon aircraft to the U.S. Navy, plus four to the Royal Australian Air Force.

To effectively combat China’s encroachment over disputed waters, regional actors must be equipped with technology that provides them with maritime domain awareness. Beijing’s modus operandi is to start slow with non-kinetic deployments, and then slowly ramp up its presence until it far outnumbers its opponent. This is a strategy it has effectively employed multiple times in the past, most recently in its claim over large parts of the South China Sea. Therefore, it is vital that Pacific states are able to accurately track China’s movements to respond quickly and avoid being blind-sided.

Maritime surveillance aircraft would secure Pacific states against China and any future threats. The U.S. should work with its allies in the region to ensure that they are well equipped to protect their borders and maintain stability in East Asia. There is potential for such cooperation in the strong relations the U.S. already has with partners in the region, most notably India, Australia, and South Korea.

Cooperation between the U.S. and India was a high priority under the Obama administration and has sustained as such in the Trump White House. One of India’s main concerns has been to limit China’s encroachment into South Asia. Washington and Delhi are already collaborating on monitoring Beijing’s activity in the Indian Ocean. The U.S. should continue such efforts and encourage India to play a more assertive role in defending regional stability and security.

Australia has historically been a strong partner for the U.S. and played a significant role in the global coalition’s counterterrorism efforts in the Middle East. Both countries have expressed concerns over China’s ambition and how to respond without escalating the situation. Diversifying the U.S. and Australia’s defense collaboration by working together to limit China’s expansion will fortify an already strong relationship that is important to both countries.

Securing South Korea is a top priority for Washington. Ensuring that Seoul is equipped with technology that can protect and defend its borders will go far in ensuring regional stability that is being threatened by North Korea. The ability to track the movements and possible escalation by these two actors, as well as any potential forms of aggression in the future is a necessity for all Pacific states.

Other states in East Asia should seriously consider using airborne naval surveillance to secure their maritime borders and fortify themselves against potential regional destabilization. The P-8 Poseidon will significantly impact how the U.S. and its partners respond to and counter rising tensions in the Pacific region.