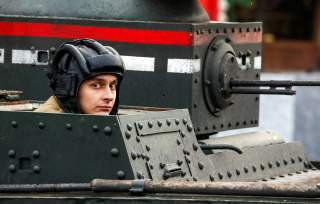 Western observers fixated on Russia’s Zapad-2017 exercise throughout the fall of 2017. This despite the fact, as I noted immediately after the exercise, that there were notable Western exercises of similar or even larger size going on at the same time in Poland and Sweden. At the end of Zapad, there was some debate over how large the exercise was, as the Russians went home in defiance of some predictions. At the beginning of October, U.S. Army Europe commander Gen. Ben Hodges officially accused Russia of employing over forty thousand soldiers in Zapad-2017, and then the story disappeared from the news.

With Russia and Belarus standing by the story that only 12,700 total servicemen participated in Zapad-2017 (and resentful of Western “information attacks” against them), how did Hodges come out with forty thousand soldiers?

The answer is that in September 2017, a large exercise called Zapad-2017 took place in Belarus and western Russia—but this was just one element in the expanded Zapad universe. That month, the Russian Ministry of Defense reported at least 261 military exercises across the country (324, if you include the Russian National Guard). Many, though not all, of these exercises took place at the same time and in the same scenario as Zapad-2017, and combined they raise the total number of participants to around forty thousand.

So what were these other exercises in the “expanded Zapad universe”? A new report out on warvspeace.org details the breakdown of the various types of exercises going on at this time.

Whereas the Zapad-2017 exercise itself restricted itself to units from Russia’s Western Military District and central reserve, the other exercises going on at the same time on the same script extended all the way from the Barents Sea on the Scandinavian High North to Crimea to the North Caucasus to the Caspian Sea. In fact, there were exercises in Kaliningrad, at the epicenter of Zapad-2017, that were not officially affiliated with the flagship exercise. Late summer is exercise season in the Russian Federation, and places as far afield as Tajikistan, Siberia and Sakhalin in the Far East also saw exercises, though these more likely were distinct from the Zapad narrative.

What purpose did these exercises serve? By and large, these exercises represented repulses against presumed Western attempts to horizontally escalate the war being simulated in Belarus. Horizontal escalation refers to opening new fronts against an enemy to divert his scarce resources away from the decisive theater. Perhaps the most famous instance of horizontal escalation in history is the D-Day landing in Normandy to absorb German units away from the Eastern Front against the Soviet Union.

In the Barents Sea, the Russian Northern Fleet conducted its summer training capstone event at the same time as Zapad-2017 was occurring far to the south. The navy practiced intercepting enemy cruise missiles as would be anticipated in the midst of a larger conflict with the West. Meanwhile, Russian surface elements, submarines and coastal batteries practiced stand-off missile capabilities to prevent a potential enemy from landing near their boomer bases in the High North. Though this might seem like a standard naval exercise for the twenty-first century, it was one of only five occasions over the heavy exercise period of September–October on which these weapons were implemented in one of these drills. Two of the other four were part of the official Zapad-2017 exercise itself in the Baltic Sea at the same time; the other two came a full month later. All of this suggests that this summer training in the High North was thoroughly coordinated with the other major exercise ongoing in the West.

In addition to repulsing an enemy landing on Russian territory in the High North, this Arctic training session included an amphibious warfare segment that a Norwegian think tank reported was an exercise to capture Svalbard. Though the Russians denied this allegation, the importance of this summer training session should not be underestimated.

In addition, three exercises (and a fourth one immediately afterward) were held practicing operations for creating a battalion tactical group, the type of formation deployed in eastern Ukraine and exercised among most of the units involved in Zapad-2017. Three of these took place in the Central Military District, which can be regarded as the rational source of a second echelon of a Russian campaign against NATO. The fourth exercise took place in Crimea, possibly to offset Ukrainian exercises taking place near Kiev and the northwest border with Belarus.

In turn, these exercises were only a very small percentage of the total number conducted by the Russians during this time period, including a total (including repetitions) of nearly 150,000 soldiers’ participation if you add all officially reported actions in Russia and Belarus together. Many of these exercises were not part of the expanded Zapad universe, and General Hodges’s claim of forty thousand is probably not very far off. The Russian claim of 12,700 soldiers altogether is, in turn, also probably true if one restricts consideration only to the exercises officially designated as part of Zapad-2017. But, as demonstrated above, that was hardly the entire story.