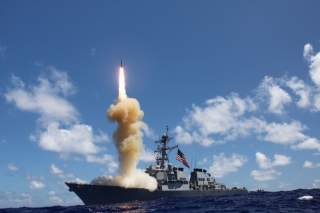 Nuclear war is the greatest military threat that America faces.  A single 500-kiloton nuclear warhead of the type common in the Russian strategic arsenal, if burst above a U.S. city, would cause heavy damage to a radius of three miles, widespread fires to a radius of six miles, and skin lacerations to a radius of nine miles.  Electronic systems including power grids would be disabled to a far greater distance, and life-threatening radiation would linger for years.

Russia has over a thousand such warheads on ballistic missiles able to reach the U.S., and that is where the vast majority of them are presumed to be aimed.  The sole U.S. military system capable of intercepting nuclear warheads traveling at intercontinental speeds is the Ground-based Midcourse Defense deployed in California and Alaska, but that system is only expected to deploy 44 interceptor missiles and is itself vulnerable to destruction.  Beyond that, Washington relies mainly on the threat of retaliation to deter nuclear aggression against the American homeland.

The United States is thus the only dominant military power in recorded history that has elected to forego active defenses against the greatest threat to its survival.  Missile defense currently claims only 1% of the U.S. defense budget, and most of that goes to dealing with regional threats rather than the strategic danger Russia and China pose to America.  In other words, Washington spends more money each month defending Afghanistan than it does in a year trying to defend against the one challenge that could destroy American civilization.

The reason for this seemingly perverse arrangement of military priorities lies in a series of assumptions about nuclear threats that won acceptance from Western elites during the Cold War.  With the passage of time, most of those assumptions have been called into question by new technology and changes in the geopolitical landscape.  However, there has been no serious rethinking of U.S. nuclear strategy.  Here are the five most important assumptions shaping official thinking about national missile defense, and what's wrong with them.

Secure retaliatory forces can deter nuclear attack indefinitely.  Offensively-based deterrence appears to have worked since its inception in the early postwar era, but it is predicated on the assumption that nuclear-armed adversaries will be rational, not prone to accidents, and always in command of their strategic forces.  Deterrence theory can't cope with deluded leaders, mechanical failures, breakdowns in the chain of command, or the kind of siege mentality that takes hold when adversaries think they are about to be attacked.  Eventually, one of those scenarios will occur.

Active defenses destabilize the nuclear balance.  When countries depend on the threat of retaliation-in-kind to deter nuclear attack, any move by one side to blunt that retaliation can be seen as reducing the disincentives to aggression.  The logical response is to build up offensive forces so that defenses can be overwhelmed.  If both sides react in the same manner, that can lead to a dangerous arms race.  However, the unspoken part of this assumption is that it costs less to add more offense than more defense.  If the "cost-exchange" ratio favors the defense, the logic of building up offensive forces disappears.

Current technology can't cope with big nuclear attacks.  Ronald Reagan's plan to use space-based defenses against nuclear attack was derided by critics who believed Russia could overwhelm whatever was built with more missiles.  That might have been true before the information revolution, but technology has advanced considerably in recent decades.  An array of defensive options such as high-power lasers now exist that were in their infancy during the Reagan years.  Since no comprehensive assessment has been conducted of how new technology might be applied to strategic defense, there's no way of knowing whether this assumption is still valid.

Defenses need to be nearly perfect to make sense.  Because nuclear weapons are so powerful, it doesn't take many to destroy an economy.  A bare 5% of Russia's 1500 strategic warheads, optimally targeted, could collapse most U.S. infrastructure.  However, a layered defensive system in which each of two protective tiers was 80% effective would stop 96% of attacking warheads -- and Russia isn't likely to use all of its warheads in an attack.  In an attack employing, say, 500 warheads, only two dozen might get through layered defenses, and many of the most important targets would be unscathed.

Effective defenses would prove too costly to be affordable.  The U.S. could field reasonably robust national missile defenses for less money than it is currently wasting trying to prop up hopeless causes like the governments of Iraq and Afghanistan.  Such defenses would be able to negate any attack launched by a smaller nuclear power like North Korea, and any accidental/unauthorized attack launched by a larger nuclear power.  It could also provide the foundation for truly imposing protection against a large-scale, deliberate attack -- which presumably would involve a layered defense employing mobile (as opposed to fixed) assets and at least some laser weapons.

It is easy to construct a parlor game in which learned experts pick apart plans to build more capable national missile defenses.  However, you don't even need experts to pick apart our current nuclear strategy -- all you have to do is imagine how a nuclear-armed Hitler in his last bunker might have behaved to see the limitations of offensively-based deterrence.  Maintaining survivable retaliatory forces is absolutely essential, but if that is all we have on the day deterrence fails, it will be a sad monument to what might have been.