The Paris Air Show Will Showcase America’s Aerospace Industrial Might 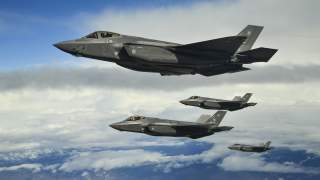 On June 19th, one of the world’ largest and most prestigious air shows will open at the Le Bourget airfield outside Paris. This is an event that the aerospace world attends, one which private companies and governments both employ as a stage to showcase some of their best products and impressive capabilities. European companies, in particular, are fond of using the Paris Air Show to launch major new platforms. In addition, it has become quite common for aircraft manufacturers to announce major sales during the show.

Historically, the biennial Paris Air Show has provided a snapshot of the state of aerospace industries around the world. Particularly during the Cold War but even afterwards in times of increased international tensions, the major military powers used this venue to send messages regarding their abilities in the air and space domains. This year is likely to be no different.

It is noteworthy, therefore, that the U.S. Air Force, after some initial hesitancy, decided to allow two F-35A Joint Strike Fighters (JSF) to conduct a flight demonstration at the show. This is not the first time that U.S. F-35s have appeared in European air space. The Marine Corp’ F-35B, the short takeoff and vertical landing variant, participated in the 2016 Farnborough International Airshow. Earlier this year, eight F-35As conducted the first joint training deployment in the United Kingdom. These aircraft also made politically-important visits to both Estonia and Bulgaria.

Nevertheless, this planned F-35A flight demonstration is important on several levels. It is part of a concerted effort by the U.S. government to underscore its commitment to the security of Europe. It sends a message to friends and foes that the U.S. military leads the world in the development and deployment of fifth-generation aircraft. Visits to the United Kingdom and France also serve as reminders that the JSF is an international fighter and that seven NATO members invested their money in the program. In fact, these allies are planning to acquire several hundred F-35s. Finally, the flight demonstration will underscore the fact that virtually all of the JSF’s “teething” problems are behind it.

The F-35 will not be going to Le Bourget alone. The Department of Defense will send many of its top-of-the-line aircraft and helicopters to Paris including the P-8A anti-submarine aircraft, the C-130J transport, the V-22 Osprey, AH-64 Apache and the CH-47 Chinook heavy-lift helicopter. These are among the best military aircraft in the world which is reflected in the continuing demand for them by friends and allies. In addition, the Textron/Airland team is sending its Scorpion, a light attack/intelligence, surveillance, and reconnaissance jet aircraft, to Le Bourget.

On the commercial side, Boeing is sending both its 737 MAX 9 and 787-10 Dreamliner flight test airplanes along with enhanced versions of its popular aircraft to the air show. Other U.S. companies that will provide display versions of their products include Gulfstream and Bell Helicopters.

Even the appearance at Le Bourget of non-U.S. commercial aircraft can say something important about the state of this country’s aerospace industry. The Canadian Company Bombardier, which debuts its C Series passenger jet at the 2015 air show, will be back looking for additional sales. Embraer, Brazil’s major aircraft producer, used the last air show to unveil its E-Jet E2 family of narrow-body, medium range commercial aircraft. It is reported that this year Airbus will publically fly for the first time its new A321neo, one of several variants in the family.

What these aircraft programs have in common is that they all are powered by Pratt & Whitney’s advanced geared turbofan engine (GTF). The GTF also is on A320neos operated by numerous airlines and will power hundreds more that are on order. This engine provides a substantial improvement over those presently in service in terms of fuel use, noise level, emissions and operating costs.

The GTF has experienced some problems with respect to the reliability of specific components. Pratt & Whitney is taking steps to deal with these issues, which are not uncommon for new aviation products. Given the company’s past successes in troubleshooting its products, including its development of a rapid solution to a fan blade rubbing problem with the F-35’s engine, it is likely that GTF’s problems will be solved.

Like the 51 air shows that have come before, the 2017 event will be a testament to the technological progress that continues to be made in the aerospace sector. It also will speak to the importance of the U.S. and its allies continuing to invest in aerospace capabilities that will ensure its military superiority over any potential adversaries.