The Pentagon Has a Plan to Use Robots to Patrol Cities 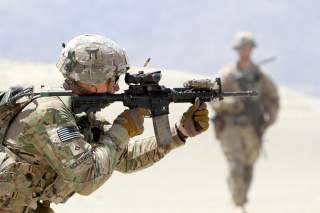 Mao Zedong famously advised guerrillas "to move among the people as a fish swims in the sea."

DARPA thinks it has the answer: use robots to spot the bad guys.

After all, one of the most dangerous tasks U.S. soldiers face is foot patrols in a hostile city. Enemies can hide in buildings and lurk in shadows. And just who is an enemy, and who is an innocent civilian, when everyone looks and dresses alike?

So, DARPA has unveiled The Urban Reconnaissance through Supervised Autonomy (URSA) project, which envisions a network of sensors and drones that not just monitors a city, but can also automatically determines which inhabitants are hostile or friendly. Once hostile forces are identified, U.S. ground troops can be called in to finish them off.

DARPA shows how complex this task is and what it has in mind in the following example:

A static sensor located near an overseas military installation detects an individual moving across an urban intersection and towards the installation outside of normal pedestrian pathways. An unmanned aerial system (UAS) equipped with a loudspeaker delivers a warning message. The person is then observed running into a neighboring building. Later, URSA detects an individual emerging from a different door at the opposite end of the building, but confirms it is the same person and sends a different UAS to investigate. This second UAS determines that the individual has resumed movement toward a restricted area. It releases a non- lethal flash-bang device at a safe distance to ensure the individual attends to the second message and delivers a sterner warning. This second UAS takes video of the subject and determines that the person’s gait and direction are unchanged even when a third UAS flies directly in front of the person and illuminates him with an eye-safe laser dot. URSA then alerts the human supervisor and provides a summary of these observations, warning actions, and the person’s responses and current location.

For the first phase of the project, the goal is to detect hostiles in a patch of urban terrain about the size of a football field. The area contains twenty enemy combatants and twenty civilians, with the goal of identifying twelve out of the twenty combatants.