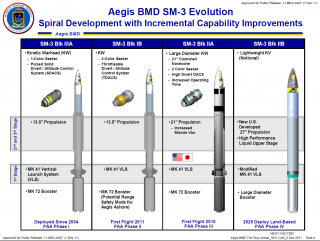 The Missile Defense Agency and Raytheon fired a new SM-3 missile variant into space and destroy an approaching enemy missile target - as a way to develop a new interceptor better able to detect and attack ballistic missile threats approaching the earth’s atmosphere from space.

"John Paul Jones detected and tracked the target missile with its onboard AN/SPY-1D(V) radar using the Aegis Baseline 9.C2 weapon system. Upon acquiring and tracking the target, the ship launched an SM-3 Block IIA guided missile which intercepted the target," a MDA statement said.

The new SM-3IIA missile is slated to fire from a land-based missile defense site planned by the Pentagon for Poland by 2018, a Missile Defense Agency spokesman, told Scout Warrior in a statement.

The SM-3 Block IIA is being developed cooperatively by the United States and Japan to defeat medium- and intermediate-range ballistic missiles.

The SM-3 Block IIA interceptor operates as part of the Aegis Ballistic Missile Defense system and can be launched from Aegis-equipped ships or Aegis Ashore sites, MDA Spokesman Chris Johnson said in a written statement.

"The SM-3 Block IIA missile is a larger version of the SM-3 IB in terms of boosters and the kinetic warhead, which allows for increased operating time. The second and third stage boosters on the SM-IIA are 21" in diameter,allowing for longer flight  times and engagements of threats higher in the exo-atmosphere," Missile Defense Agency spokesman Christopher Szkrybalo told Scout Warrior in a statement prior to this most recent test.

The objective of the test, off the coast of Hawaii, is to demonstrate an intercept of a medium-range ballistic missile target by an SM-3-IIA launched from a U.S. Aegis BMD configured ship at the Pacific Missile Range Facility, Szkrybalo added.

"Today's test demonstrates a critical milestone in the cooperative development of the SM-3 Block IIA missile," said MDA Director Vice Adm. Jim Syring, said in a written statement. "The missile, developed jointly by a Japanese and U.S. government and industry team, is vitally important to both our nations and will ultimately improve our ability to defend against increasing ballistic missile threats around the world."

The planned Poland 2018 deployment is a key part of what the Pentagon calls the Aegis Ashore program, an effort to leverage the ship-based Aegis Radar for land-fired missile defense technology. As of last year, Aegis Ashore locations are already operational in Romania as part of the Obama administration’s European Phased Adaptive Approach program.

“This is an extended capbility of what we have for the SM-3 1B.  Because of the larger missile this is a 21-inch air frame. we have a larger area of defended area coverage. we've also brought in some capability advancements into our kinetic warhead so now we have a higher sensitivity - so that is just better seeker,” Amy Cohen, Raytheon SM-3 Director, told Scout Warrior in an interview prior to this most recent test.

The SM-3 IIA weapon uses an improved seeker can better see approaching targets from longer distances compared to the SM-3 1B, she added.

In December of 2015, Raytheon received a $543 million SM-3IIA production contract to build the missiles. Some of these missiles will be sent to Poland for the Aegis Ashore site planned for 2018, officials said.

Meanwhile, Raytheon and the MDA are also upgrading the existing SM-3IB missile with improved software such that it can better detect and destroy new threats, Kenyon Hiser, Raytheon’s SM-3 Block IIA program manager, said in an interview with Scout Warrior last year.