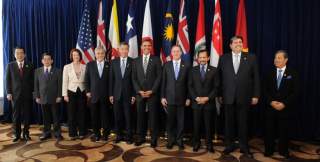 After the Obama administration’s victories in Congress the past two weeks, it appears far more likely that the United States will become part of the Trans-Pacific Partnership. Bilateral negotiations are still taking place between some of the countries negotiating the TPP—the United States and Japan still have major issues to resolve—but the chances of these bilateral hurdles being resolved, and the final agreement being negotiated, have risen substantially now that President Obama has gained fast track authority.

As the TPP’s chances rise, more countries in Asia appear ready to join the negotiations, most likely as members of the second round of nations joining the deal.

The Philippines’ trade secretary last week indicated that the country wants to join the TPP. “I want to state clearly and irrevocably that we want to join TPP,” Philippine trade secretary Gregory Domingo told a conference at the Center for Strategic and International Studies. But the Aquino administration faces significant hurdles to joining. The Philippines’ state enterprises, while not as much of a challenge to trade talks as the state firms in Malaysia and Vietnam, are still likely to wield their influence in an attempt to prevent the Aquino administration from moving forward with TPP negotiations and possibly being forced to liberalize sectors of the economy dominated by state companies and other monopolies.

In addition, the Philippines—unlike Vietnam, Brunei, or Malaysia—is a democracy, and one in which the public generally does not have a favorable view of trade deals. Although President Aquino, like all presidents of the Philippines (the executive only gets one term in office), is a lame duck, he still wants to use his influence to support his party’s preferred successor—which now appears to be Senator Grace Poe—in winning the presidency. Negotiating to join a trade deal likely to be unpopular with the public and with key segments of elite opinion—church leaders, many NGO leaders—is not going to help Aquino pass on whatever popularity he has left.

Thailand has repeatedly expressed interest, in theory, in joining the TPP, though the Thai government has been assessing the costs and benefits of the TPP for Bangkok for at least three years. In theory, Thailand is better equipped to join the TPP than the Philippines. The country is likely to remain under authoritarian or pseudo-authoritarian rule for several years, so public sentiment about a trade deal would matter less, and the Thai economy is slightly more open than that of the Philippines. But Thailand’s contentious domestic politics have made it difficult for the Thai government to focus on anything other than drafting the new constitution, suppressing dissent, and ensuring the military’s sustained influence. With Thai politics in such turmoil, it is hard to imagine Bangkok focusing its energies on the TPP.

Taiwan also reportedly has expressed interest in joining the TPP, after the current parties to the negotiations agree on terms and launch the free trade area. Taiwan is solidly positioned to join the TPP, though the American Chamber of Commerce in Taipei recently noted that the Taiwan government would have to modify some regulations on sectors including medical devices and some areas of e-commerce to harmonize these regulations with the standards likely to be adopted in the TPP. However, even though Taiwan relies on trade, and President Ma Ying-jeou has called for an “all-out effort” to make the island ready to join the TPP, presidential elections loom early next year. It remains unclear whether the opposition, if it wins the presidency, will be as committed to joining the TPP.