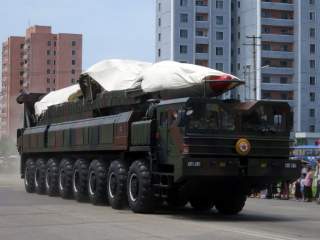 North Korea is launching new missiles at an accelerated pace as it advances its weapons programs, making it difficult to identify North Korean missiles.

North Korea tested a Hwasong-12 medium long-range ballistic missile Sunday. Analysts suspect the missile may have a range of approximately 2,800 miles, putting the U.S. base in Guam within striking distance. Pyongyang released information and related images just a short while after defense officials identified the missile as a KN-17, a single-stage, liquid-fueled Scud variant first tested last month, according to Fox News.

The confusion led some to assume that the Hwasong-12 and the KN-17 are the same missile.

The KN-17 is believed to have anti-ship capabilities. Some observers believe that it represents a test of maneuvering re-entry vehicles (MaRV), allowing it to evade defenses to strike ships as well as logistics and command centers. The missile North Korea tested Sunday was a surface-to-surface missile. There were no grid fins indicating any type of MaRV modifications to the weapon.

Both weapons are believed to have been presented in a military parade in April.

North Korea has tested three new missiles this year, making it increasingly difficult for defense and intelligence officials to accurately identify the munitions. Furthermore, the North has begun testing missiles at different locations, adding to the confusion. And if a test fails, it is much more challenging to identify the type of missile launched, especially considering Pyongyang’s lack of reporting on tests that go awry. Incorrect labeling of North Korean weapons systems has occurred before. In fact, it happened early last month when North Korea unsuccessfully fired off a missile before President Donald Trump’s meeting with Chinese President Xi Jinping.

U.S. Pacific Command initially identified the ballistic missile launched on April 4 as a KN-15 (Pukguksong-2), a three-stage, solid-fueled missile based on submarine-launched ballistic missile technology tested in February. If the missile had been a KN-15, the engine would have had to fail during the burn of the second stage engine. Pacific Command later changed its assessment, claiming that the weapon was an older, liquid-fueled Scud, with some observers suspecting that it may have been an extended-range Scud.

Defense officials identified the ballistic missile launched on April 16, the day after North Korea’s big military parade, as a KN-17, according to Fox News. Some suspected that the weapon tested a few weeks earlier was a KN-17, not an older Scud as originally reported. Observers also labelled another failed missile test in late April a KN-17 although the launch location changed.

“These are very concerning moments to me because we’re not sure, every time they launch, we’re not sure if this is a threat missile or not,” General John Hyten told Congress last month, explaining that it is hard to know what is going to come flying out of the reclusive North Korean state.