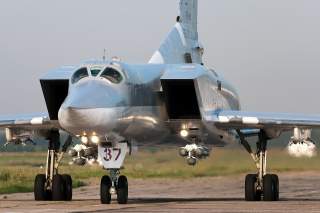 Russia is starting to move away from relying on its non-strategic nuclear weapons as it starts to field new long-range precision guided weapons such as the Kalibr cruise missile. Eventually, the Russians hope to use long-range hypersonic weapons for long-range conventional deterrence.

“Due to the gained momentum in high-precision weapons and current research in hypersonic missiles, main part of strategic deterrence tasks can be transfer from nuclear to non-nuclear sphere,” Russia’s chief of the general staff Gen. Valery Gerasimov said at the Russian Defense Ministry’s November 7 board session.

As predicted by many analysts focusing on the Russian military, the Kremlin is moving away from relying on its nuclear weapons as its long-range conventional strike capabilities improve.

“Over the last five years, the Armed Forces have made a breakthrough in long-range high-precision weapons. The Iskander-M missile systems, underwater and surface warships with the Kalibr missile systems are being supplied. The long-range aircraft are being upgraded to operate the new Kh-101 cruise missile.”

During the 1990s and early 2000s, especially after NATO’s intervention in Kosovo without the sanction of the United Nations Security Council, Russia developed a doctrine where it would use nuclear weapons first to “de-escalate” a conflict. The strategy was adopted in 2000, though according to the Central Intelligence Agency, the doctrine originated in 1997. The idea was that the threat of a limited defensive nuclear retaliation against even a conventional aggressor would force that attacking force to back off.

“Russia’s de-escalation strategy provides instead for infliction of ‘tailored damage,’ defined as ‘damage [that is] subjectively unacceptable to the opponent [and] exceeds the benefits the aggressor expects to gain as a result of the use of military force,’” former Soviet and Russian arms control negotiation Nikolai Sokov wrote in the Bulletin of the Atomic Scientist in 2014.

“The efficacy of threatening tailored damage assumes an asymmetry in a conflict’s stakes.”

While Russia’s de-escalation strategy did not become widely known in the West until the release of the Kremlin’s 2010 Military Doctrine, that document actually increased Moscow’s threshold for nuclear weapons use. “Whereas the 2000 document allowed for their use ‘in situations critical to the national security’ of Russia, the 2010 edition limited them to situations in which ‘the very existence of the state is under threat,’” Sokov wrote.

However, Russia only intended to use the de-escalation doctrine until it could rebuild its conventional forces and develop long-range precision guided weapons as the CIA noted in its report, which dates back to the year 2000. Indeed, as Sokov noted, Russia’s 2000 military doctrine “characterized the limited use of nuclear weapons as a stopgap measure to be relied on only until Russia could develop a more modern conventional strike capability.”

The Russians seem to have started moving away from their reliance on nuclear weapons as early as 2013, where that year’s Zapad exercises did not feature those weapons. “This hints that Moscow has gained more confidence in its conventional capabilities,” Sokov wrote. “As these capabilities continue to improve, Russia is likely to rely less on its nuclear weapons.”

Sokov has been proven to be correct as Gerasimov’s speech shows. The Russian military is moving away from its reliance on nuclear weapons, which can only be a good thing.