The Real Reason Sweden Brought Back the Draft 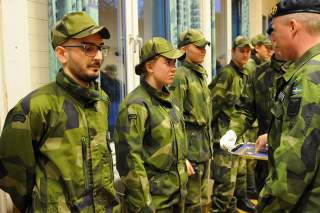 The Swedish government has had conscription lying dormant since 2010 and finally feels the need to once again press the nation’s youth into service. While this may be construed as part of Stockholm’s desire to show its commitment to Baltic security, the underlying reasons for the reintroduction of conscription may be more pragmatic politically. Whether Sweden wants to admit it or not, its armed forces have a manpower shortage and conscription is an easy way to fill the ranks.

Originally introduced in 1901, conscription in the country was aimed at providing defense for the long-held desire to remain neutral, while defending Swedish borders. After the end of the Cold War and a switch to predominantly foreign missions, Stockholm started gearing its military towards an all-professional force. Thus, as of 2010, conscription was stopped until deemed necessary once again. That time has now arrived, as evinced by a recent government led report. The inquiry found that only 2500 of the 4000 needed training slots had been filled in 2015 and that recruitment would need to increase 47 percent starting in 2017 to fulfill the needed expectation of employed soldiers and officers. For additional consideration, out of the nations on the Baltic Sea, Sweden spends the smallest share on defense in proportion to its GDP. While many in the United States, including U.S. Secretary of Defense James Mattis, are pushing for European NATO members to hit 2 percent of GDP defense spending, Stockholm is projected to spend a measly 1 percent of GDP on defense by 2020. As a comparison, this has gone down from around 2 percent of GDP in 1997, and 3 percent of GDP in 1976.

In addition to the generally low defense spending by Sweden, there are not many incentives to join the military—at least financially. Compared to the average Swedish salary, wages are quite low in the military; with starting pay around 18,000 kronor a month (approximately $2000). Since the force was geared toward becoming an all-professional military, there are bonuses for added-risk salary for international missions, in addition to 24-hour training missions, but they are from an international perspective also low in comparison to other countries.

Reintroducing conscription is also an effective way to superficially fill the ranks of Sweden’s armed forces. The Supreme Commander of the Swedish Armed Forces recently announced that at least 6.5 billion kronor (approximately $720 million) would be needed to fulfill the minimum requirements set for the armed forces from by the defense bill from 2015, for the budget from 2016–20. The total annual budget is around $5.8 billion. The combination of government reluctant to spend more on the military, in addition to the weakening of the kronor and strengthening of the dollar, have made the prospects for defense far more expensive. The acquisition of big-ticket items like sixty new JAS Gripen E ($4 billion) and two new A26 submarines ($900 million) will also further strain budgets.

Returning to the geopolitical realm, Sweden has also been hard pressed to take a larger stand against perceived Russian aggression, particularly within the Baltic Sea. Last year’s buzzing of American ships by Russian jets show that Moscow means business and will try to intimidate a superpower like the United States, much less a smaller regional power like Sweden. In order to better secure its own territory, Stockholm has not been entirely silent. A major step was taken last summer when the Supreme Commander of the Swedish Armed Forces unexpectedly decided to permanently station soldiers on Gotland Island once again. If any regional conflict were to occur, the island’s strategic location in between Latvia and Sweden would make it an ideal station for A2/AD weapons such as S-300 or S-400 systems. If Russia (our any nation for that matter) were to seize the island and man defensive systems, operations in the theatre would become incredibly difficult. While the garrison on the island is less than two hundred soldiers, it is a clear sign that Sweden is starting to think more seriously about defense in the region.

Stockholm’s decision to reintroduce conscription should not be overblown. It is a step toward furthering Sweden’s and the Baltic security equation, but is a small step compared to comparative Russian strength in the region. If the Swedes want to take their security into their own hands and ensure that Moscow does not sense weakness, it will take a larger investment than a largely symbolic measure to swell the ranks.

Albin Aronsson is an independent researcher on Baltic and European security currently based in Stockholm. Blake Franko is an assistant editor at the National Interest.