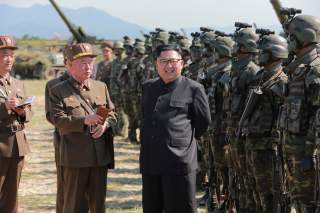 There is general agreement in Washington — and Seoul and Tokyo — that East Asia and the world will be a more dangerous place once North Korea achieves its declared goal of being able to hit the continental United States with nuclear weapons. But what is the danger, specifically?

It is less about the actual ability of North Korea to hit the continental United States with a nuclear weapon. Rather, the real danger stems from the possibility of weakened alliances and unchecked escalation in the Korean Peninsula that could spiral out of control.

The Trump administration seems to believe that even North Korea’s ability to reliably hit the United States with nuclear weapons is so dangerous that it must prevent that from happening. Yet how it intends to do that is unclear.

On 8 August, President Trump threatened strong military action, but he seemed to forget the almost certain North Korean retaliation against South Korea, a US ally, if such actions were to occur. There is also the belief that ‘maximum pressure’ by the United States, China and others will bring North Korea to the negotiating table, where it would be willing to trade away or at least freeze its nuclear and missile programs.

This ignores the reality that the Kim Jong-un regime wants to achieve the ability to hit the United States with nuclear weapons so badly, there is no package of incentives that would be acceptable to Washington and Seoul that would lead Pyongyang to abandon its goal.

But even when — not if — North Korea has the ability to strike the United States, it won’t necessarily use that capability. Indeed, the danger that North Korea would launch a nuclear first strike against the United States or its allies — Japan or South Korea — is relatively small. Pyongyang says that it is going nuclear in order to deter the more powerful United States from launching a nuclear or conventional war against it. Although North Korea is actually wrong in its assessment of the threat the United States poses, its desire to enhance its security by being able to retaliate after such an imagined attack is understandable.

South Korean and Japanese security specialists point to a more serious danger than a North Korean nuclear first strike. In maintaining their security, these countries have depended on the credible commitment of the United States to use all available means to defend them from attack by North Korea, including retaliation with nuclear weapons if necessary. Among other things, Japan and South Korea have chosen not to acquire nuclear weapons themselves because they believe in the US nuclear umbrella.

As North Korea’s nuclear program inches closer to success, scepticism is increasing in Seoul and Tokyo about the credibility of the US commitment. Reasonably, the sceptics ask, if North Korea attacked them, would Washington be willing to retaliate with nuclear weapons when North Korea could counter-retaliate by hitting the United States?

Would Washington be willing to risk San Francisco in order to save Seoul or Tokyo?

North Korea’s nuclear program poses another danger, perhaps the greatest one. Pyongyang may soon assume that it can act more recklessly vis-à-vis South Korea at the conventional level because it could hypothetically counter the United States at the nuclear level.

In the last seven years North Korea has sunk a South Korean naval vessel, bombarded South Korean-controlled islands in the West Sea and created trouble in the Demilitarized Zone (DMZ), but then backed off from further conflict. Once Pyongyang can target the United States, it will likely take bigger risks, driving wedges within South Korean society as they disagree on appropriate responses, and provoking tensions within the US–South Korea alliance. In such a crisis, there might be disagreements on how severely the South Korean armed forces should retaliate against North Korean aggression in order not to appear weak and deter future humiliation.

In this situation, the danger of reciprocal escalation, including the use of nuclear weapons, would be real. Unlike relations with the Soviet Union during the Cold War, there are no communication channels with North Korea to reduce the risk of misperception and miscalculation.

Even if escalation was controlled and Pyongyang didn’t get close to using nuclear weapons, the very existence of those weapons would weigh on the minds of South Koreans and US decision-makers. Pyongyang would hope that South Korea’s Moon administration would opt for a weak response rather than a tough one — in that case, North Korea would have humiliated South Korea and gained a political victory. If Moon chose a tough response, North Korea could back down, not having lost very much. Or it could escalate again to see what South Korea does in response. But it would believe that it controls the escalation ladder and assume that at some point, Seoul will choose appeasement.

Whatever happens, it’s probably a political win for North Korea.

The US response to these low-level probes will shape South Korea’s confidence in the United States should a crisis ever escalate towards the nuclear level. How Washington and Seoul respond at low levels will also shape the type of risks that North Korea is willing to run.

The United States needs to assume that North Korean conventional probes will come, sooner or later. It is far better that Washington formulate its responses in advance and urge South Koreans to do the same, in order to reduce the chances that a reaction is bungled when more aggressive provocations inevitably occur.

Richard C. Bush is Senior Fellow and Co-Director at the Centre for East Asia Policy Studies, The Brookings Institution.

A longer version of this article was first published here by Brookings.