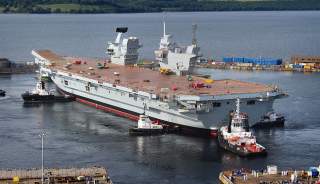 The first new Royal Navy aircraft carrier in thirty years is nearing sea trials. After a brief absence from the world of fixed-wing naval aviation the Royal Navy’s brand new flattop HMS Queen Elizabeth and its sister ship, Prince of Wales, will soon sail the seas, their decks full of new F-35 Joint Strike Fighters. The result will be the most powerful “Senior Service” in generations.

By 1982, the Royal Navy had committed to building three Invincible-class carriers. Somewhat scaled back from earlier ships, and dwarfed by the U.S. Navy’s Nimitz-class carriers, the Invincible class was more suited to antisubmarine warfare duties against the Soviet Navy, keeping the sea lines of communication between North America and Europe clear in the event of World War III. The Invincibles could sail with a complement of up to twenty-two aircraft, typically a mixture of Sea Harrier fighters and Sea King helicopters.

The 1982 Falklands War demonstrated the shortcomings of relying upon such small carriers. HMS Invincible, along with the older HMS Hermes, struggled to provide early warning and combat air patrol over the UK task force sent to reclaim the islands, and were unable to prevent Argentine air power from sinking six friendly warships and supply ships and damaging another nine.

In 2007, despite the general downturn in the size and scope of the navy, plans were announced in 2007 to construct two brand-new aircraft carriers. Each would be stocked with brand-new F-35 Joint Strike Fighters and helicopters, and would be up more than three times larger than their predecessors by displacement. The carriers, Queen Elizabeth and Prince of Wales, would be the largest warships ever built by the UK, bigger even than the World War II battleship HMS Vanguard.

Unfortunately, in order to free up funding for the new carriers the older ships had to be retired, and decommissioning of the Invincible class carriers and their Sea Harrier jets during the 2010s was a huge blow to the Fleet Air Arm. The three warships were broken up for scrap, and the remaining Harrier jets, which by now included RAF Harriers, were purchased by the U.S. Marines to provide spare parts for their own fleet of AV-8B Harriers.

The first carrier, Queen Elizabeth, was laid down in 2009. Once complete, it will be 920 feet long and displace seventy thousand tons fully loaded. Conventionally powered, it will have a top speed of twenty-five knots and a range of ten thousand miles. It is expected to have a lifespan of fifty years. Although it will never sail into danger without escorts, the carrier will carry two Phalanx CIWS and four thirty-millimeter cannons for close-in protection from aircraft, missiles, drones and small boats.

The aircraft launching and recovery system of the new carriers was an early source of controversy. The ships were originally designed to support short-takeoff and vertical-landing operations, and were set to use the F-35B Joint Strike Fighter. Designed for the U.S. Marine Corps to take off from Wasp- and America-class amphibious assault ships, the -B variant is capable of short rolling takeoffs and vertical landings via a lifting fan and thrust vectoring nozzle system developed by Lockheed Martin in conjunction with Rolls-Royce.

By 2010, the UK government had changed its mind and looking into setting the carriers up with traditional catapults and arresting wires, which would in turn prompt it to purchase the U.S. Navy’s F-35C carrier variant. Unfortunately the cost of installing so-called “cats and traps” ultimately proved prohibitive, and the UK went back to a short takeoff and landing scheme.

The air wing on each Queen Elizabeth carrier will consist of twelve F-35B fighters, including 809 Squadron of the Fleet Air Arm. Up to twenty-four F-35Bs will embark in emergencies. U.S. Marine Corps F-35s will fly from Queen Elizabeth on its first operational tour. Airborne surveillance and control is provided in the form of ten Crowsnest surveillance systems. Carried by the Fleet Air Arm’s AW101 Merlin helicopters, Crowsnest allows 360-degree radar scanning using the proven Searchwater sea surveillance radar system.

Aside from air superiority and strike missions, the Queen Elizabeth class is also designed with some amphibious capability. Following UK experiences in the Falklands and the recent intervention in Libya, the carriers will be capable of carrying up to 250 Royal Marines or members of 16 Air Assault Brigade, WAH-64 Apache attack helicopters, AW159 Wildcat utility helicopters and Chinook heavy-transport helicopters. This amphibious capability is even more important in light of the retirement of HMS Ocean, which is being prematurely decommissioned after less than twenty years’ service.

Queen Elizabeth is on track to be delivered in May 2017, with flight trials of Merlin helicopters starting in February next month. Prince of Wales will be inducted into the Royal Navy in 2020. It’s unlikely that both will often serve at the same time—rather, having two carriers insures that at least one should be available at all times. Once both are operational, the United Kingdom will be back in the naval aviation game for the next half century to come.

Image: HMS Queen Elizabeth is floated out of dock for the first time. Wikimedia Commons/HMS Gannet/MOD