The Royal Navy Faces a Frightening Future Without Anti-Ship Missiles 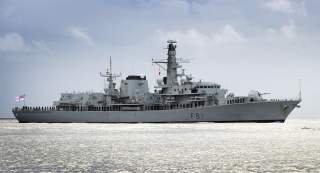 Right now, the Royal Navy’s main surface-to-surface anti-ship weapon is the over-the-horizon Harpoon missile, which is also the primary equivalent weapon in service with the U.S. Navy since 1977. Back then, the missile soon became a workhorse that provided considerable range compared to other anti-ship weapons at the time.

With the advent of new Chinese and Russian anti-ship missiles proliferating around the world, however, that is no longer the case. And unlike the U.S. Navy, the Royal Navy will be without Harpoons or a replacement for them within a few years, turning its ships into sitting ducks.

In 2010, Britain’s sailing branch opted not to replace the Harpoon, and one year ago it was revealed the missiles were set to retire at the end of 2018. In September 2017, IHS Jane’s Defense Weekly announced that the U.K. Ministry of Defense has delayed the retirement until 2020.

That buys the Royal Navy some time — but not much. Fundamentally, the situation hasn’t changed. The Harpoon is already obsolete and terribly outranged, which is why the United States is preparing the new 200-mile-range LRASM to replace it. But no new missile is expected for the Royal Navy until possibly 2030 when the Perseus missile by European developer MBDA is complete.

It’s all highly troubling for the cash-strapped Royal Navy, as it will leave a multi-year gap when British warships will have to rely on their guns, and Wildcat helicopters armed with Sea Venom and Martlet missiles — only good for taking on lighter targets up to corvette size. The Royal Navy’s Lynx helicopters with their light Sea Skua missiles retired in March 2017. The United Kingdom’s 13 Type 23 frigates and three of its Type 45 Daring-class destroyers currently have the Harpoon.

“This state of affairs is unacceptable, dangerous and risks making the navy a laughing-stock,” Save the Royal Navy, a group advocating increased defense spending, stated on its website. “Whoever must carry responsibility, it is quite difficult to refute their allegation that sending warships unable to sink other warships to sea is equivalent to send sending soldiers into battle without rifles.”

“Within the R.N. itself there is considerable alarm and despondency about the issue, another good reason to find a speedy resolution at a time when upholding morale and personnel retention is a top priority. Who wants to be aboard an R.N. warship in combat when not properly equipped to fight back?”

(Recommended: What a War in the South China Sea Would Look Like)

At best, the Royal Navy could try to extend the lifespans of its Harpoons further or seek an interim replacement. There are several good canister-launched missiles on the market which could do the job, such as the Swedish RSB-15 Mk3 which has a range of more than 150 miles compared to the 86 miles of Britain’s version of the Harpoon — the Block 1C. Britain could also acquire French Exocets, a newer version of the American Harpoon with three times the range of the current one, or Norway’s Naval Strike Missile.

Nevertheless, the task is not as easy as simply buying a new missile. Type 23 frigates — expected to continue service into the 2030s — are not configured for vertical launch systems, while most Harpoons including the Block 1C launch from angled deck canisters. The future Type 26 frigate, however, will only have vertical-launch cells for missiles, forcing the Royal Navy into a dilemma.

Either the Royal Navy dedicates money into buying the Type 26 a new anti-ship missile, and the Type 23’s armament continues to age into obsolescence, or it doesn’t. In most cases. The Royal Navy could buy a multi-purpose missile such as the Norwegian NSM. But the different design philosophies inherent in Britain’s ships, combined with caps on spending, have restricted what the fleet can afford.