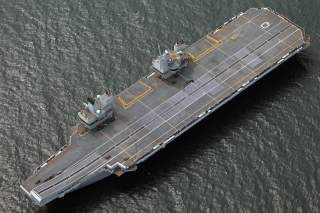 2017 was proclaimed to be the Year of the Royal Navy (RN) as it welcomed several new ships to the fleet. It was, however, an annus horribilis of sorts for the British naval service as it came under fire on a litany of issues such as manpower woes and the controversial Queen Elizabeth (QE) supercarrier project.

The RN reached a milestone when HMS Queen Elizabeth began sea trials in June, and media outlets, both British and international, have been closely tracking the ship since then. Local media was literally baying for blood after a leak was discovered on the Queen Elizabeth last month, and this was but the latest episode of a mountain being made out of a molehill vis-à-vis the 65,000-ton, £3.1 billion platform—the largest and costliest platform ever built for the British armed forces. That being said, various commentators have also decried the vessel’s utility, but their arguments largely do not stand up to scrutiny as they do not consider a number of operational nuances.

A longstanding criticism of the carrier in this regard is that it would have few, if any, fighters embarked on it. Critics point to the current travails of the F-35B—the aircraft that will fly off the QEs’ flight decks in time to come—to bolster their claim that the carriers will deploy with very limited airpower. One prominent British defense journalist wrote that these ships would face the “humiliating prospect of having very few aircraft flying from them,” adding that “(t)hey are designed to carry 36 joint strike aircraft—F-35s, known as the Lightning II—but are unlikely to carry more than 12.”

It is pretty much early days to make such an argument as HMS Queen Elizabeth as well as her as-yet uncompleted sister HMS Prince of Wales are expected to attain initial and full “carrier strike capability” only during the 2020s. Indeed, Britain has already taken delivery of fourteen F-35Bs with more to be procured in the coming years. Whitehall wants to buy forty-eight Lightnings for carrier service, and even if this figure could not be fully attained due to fiscal constraints, any shortfall in the flat-top’s aircraft complement could be mitigated by the deployment of United States Marine Corps F-35Bs on the ship. To be sure, this eventuality might be a tad embarrassing politically for London, but it is undeniable that such an arrangement with America would make the best of a less than ideal situation. What is more, the QE carrier was designed specifically with such interoperability in mind.

Another charge levelled at the QEs is that they are highly vulnerable to challenges such as modern submarines and antiship cruise missiles during hostilities. In this regard, the British flat-top does not have a large-enough fighter complement as mentioned above, as well as a capable airborne early warning (AEW) platform like the American E-2D Hawkeye to protect itself against enemy threats, critics maintain. In addition, the QE lacks an adequate point-defense system, and this is compounded by the notion that the British carrier would sail with inadequate escorts because of the small size of the RN’s surface combatant force.

To be sure, these criticisms are valid per se and have merit if the Queen Elizabeth carrier force were to be operating on its own in a combat scenario a la the 1982 Falklands campaign. They, however, fail to consider the fact that the British force is unlikely to operate in isolation in most circumstances—its combat deployment would invariably be as part of a U.S.-led coalition given the current geostrategic environment.

Who, then, are Britain’s likely adversaries in the coming years? Russia? American involvement check. How about Middle East “rogue” states like Iran? American involvement check. Operations against extremist groups like the Islamic State of Iraq and Syria would invariably be led by Washington as well. While Britain did fight on its own during Operation Corporate, it is safe to say that a second Falklands War is unlikely to break out within the next several years given the current vicissitudes of the Argentine armed forces.

In the abovementioned scenarios, the QE carrier group is likely to operate together with its American counterpart, and the capabilities the latter provide would mitigate the shortcomings of the British force. For instance, the limited area air defense of the QE carrier group would be alleviated by the presence of the presence of U.S. Aegis-equipped platforms. Ditto the Hawkeyes of the American carrier strike group (CSG) for the limited AEW coverage provided by the British flat-tops’ Merlin helicopters.

Utility as a “Light” Carrier

All that being said, any QE vessel operating with American CSGs would likely assume a secondary role—that of the light carrier—given its relatively limited capabilities, in a throwback to the Second World War. In the period 1943–45, Independence-class light carriers and their larger Essex-class cousins made up the Fast Carrier Task Force that was so decisive in shaping the outcome of the central Pacific campaign. The Independences—with a small complement of slightly over thirty aircraft, including some two dozen fighters—were usually tasked to provide for the prosaic tasks of combat air patrol and antisubmarine warfare, leaving the more glamorous duties of attacking Japanese warships and land bases to the “heavies”.

This disposition of assets could be replicated in a joint American-British carrier force. As a matter of fact, the two navies have undertaken to work closely on future carrier operations, and a joint entity comprising flat-tops from both sides would be highly beneficial given the synergy such an arrangement would bring about. For instance, the Queen Elizabeth flat-top, with its relatively short-ranged F-35Bs, could assume a key role as fleet air defender a la the Independences, leaving the U.S. supercarrier with more aircraft to project force against the enemy. Indeed, such a deployment would dovetail with the rather practical “fleet-unit” logic that James Holmes of the U.S. Naval War College (USNWC) wrote about in The National Interest last month.

While assuming mainly defensive duties would arguably not befit a 65,000-ton platform, the reality is carriers with ski-jump flight decks like the Queen Elizabeths are largely suited for such roles in more demanding operating environments as I argued in a recent Naval War College Review article. It is therefore perhaps time to recognize them as that and not compare them unfairly to their much more capable Nimitz-class cousins in the U.S. Navy.

All in all, while the QE flat-tops may not be the hapless white elephants in combat as several military commentators have made them out to be, neither are they in the “supercarrier” league even though they are only slightly smaller than America’s first true supercarriers of the Forrestal class. Robert Rubel, formerly a USNWC academic, wrote that a key doctrinal role for the aircraft carrier is that of a “geopolitical chess piece,” and that is arguably what the United Kingdom’s Queen Elizabeth–class flat-tops are most suited for—to serve as highly effective tools of twenty-first-century gunboat diplomacy and not so much as first-class warfighters.

Indeed, UK Foreign Secretary Boris Johnson’s statement last summer that the QEs will conduct freedom-of-navigation exercises in the South China Sea smacks not only of rising British interest in the Asia-Pacific region, but arguably also of a Britannia striving to find her place in the sun in an increasingly multipolar world. And what better platform to achieve this than a phallic 65,000-ton aircraft carrier?

Ben Ho Wan Beng is a Senior Analyst with the Military Studies Programme at Singapore’s S. Rajaratnam School of International Studies, and he has a master’s degree in strategic studies from the same institution.