The Russian Army Will Soon Have Some New Big 'Guns' 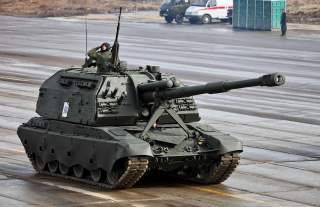 The Russian Ground Forces have started to receive a new modernized version of the Msta-S self-propelled artillery piece.

The new self-propelled gun will be used in the interim until the much more modern 2S35 Koalitsiya-SV enters service in numbers.

“Dozens of self-propelled artillery Msta-S entered into service in the military units of the 1st Tank Army in the Moscow region,” reads a statement from the Russian Ministry of Defense.

“Servicemen of the artillery units of the Tamanskaya and Kantemirovskaya divisions have completed the acceptance of the military hardware from the representatives of the military-industrial complex and it’s entering into service. Crews have completed the relevant re-training to operate it. Self-propelled artillery is placed in specially constructed parks with the necessary infrastructure.”

The two units will exercise with the new guns later this summer.

“The new hardware will take part in the combat firing of artillery of the 1st Tank army, appointed at the final stage of summer training period,” the Russian MOD statements reads.

The new gun has an improved fire-control system and a host of other improvements over the basic Msta-S.

“The authors made a minor mistake. The troops are now being equipped not with the basic Msta-S, but with an upgraded version, Msta-SM, with new fire control system and some other improvements,” Vasily Kashin, a senior fellow at the Center for Comprehensive European and International Studies at Moscow’s Higher School of Economics, told The National Interest.

Researcher Mikhail Barabanov, editor of the Moscow Defense Brief—published by theCentre for the Analysis of Strategies and Technologies (CAST)—told The National Interest that this new weapon is an updated version of the Msta-S, but the Russian MOD's designation for the gun is not the Msta-SM. “The Msta-SM was 2S33 (2S19M), an old project.  It was cancelled in favor of the 2S35 Koalititsya,” Barabanov said.

Rather, the original Msta-S was designated as the 2S19M1 while this newer upgraded version is called the 2S19M2. However, as Barabanov explained, it retains the Msta-S designation. In any case, with the Koalitsiya-SV still some years away from mass production, the still-potent Msta-S will afford the Russian Ground Forces a modern artillery piece until the new weapon is fully operational.

The Msta-S is built around a 2A65 152 mm howitzer that is capable of firing about eight rounds per minute. The new version will likely be able to fire faster because it is equipped with a new gun and improved loader.

“These are the howitzers which are being produced before full scale production of Koalitsiya starts,” Kashin said.

“It has new fire control, improved gun and loading mechanism.”

The Msta-S will eventually supplanted by the Koalitsiya-SV, which is built around a 152 mm 2A88 gun, which is capable of firing 15 to 20 rounds per minute. The new gun will be in limited service by the end of the year, but it won’t be in regular service until sometime later in the next decade.

“I think there was a statement about a limited number in service by the end of this year,” Kashin said.