The Russian Army's 5 Most Lethal Weapons of War in 2030 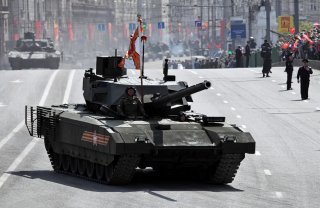 The Russian Ground Forces are at a crucial point in their history, and there’s not even in a major war. The Russian Army needs new equipment, and needs it fast.

A lagging Russian economy throughout the 1990s and 2000s kept defense spending low. As a result, Moscow has long relied on inherited equipment from the old Soviet Union. Unfortunately, like many inheritances, that of the Russian Armed Forces is rapidly running out. The newest equipment is now nearly thirty years old, and despite upgrades such as the T-72B3, fresh equipment is urgently needed.

A new generation of tanks, armored personnel carriers and infantry fighting vehicles has been promised, but given Russia’s economic downturn and Western sanctions, will they ever enter service? Here’s an optimistic picture of what might equip the Russian Army in 2030.

Set to enter service with the Ground Forces by 2018, the new Armata main battle tank is a huge leap forward, incorporating a whole slew of new technology. Armata has a new modular armor system, unmanned turret, active and passive protection systems, digital tracking system and is allegedly coated with a stealth paint making it “invisible” to radar.

Armata is equipped with a 125-millimeter smoothbore gun and a remote-controlled 12.7-millimeter heavy machine gun. Each tank is expected to cost approximately $3.7 million dollars, and Moscow has just signed the contract for the first one hundred tanks. That will be enough to outfit three battalions of thirty-one tanks each, or a single Russian tank regiment. To fully modernize the RGF, more than a thousand more will be needed.

The Russian Ground Forces are far removed from the days when masses of unprotected Russian infantry were used as cannon fodder. Today, Russian “grunts” ride into battle, and thanks to the new T-15 infantry fighting vehicle, will be some of the best protected infantry on the battlefield.

The T-15 is based on the T-14 Armata chassis, and as such is heavy and well protected. It has a 1,500-horsepower engine that not only gives it a good horsepower-to-weight ratio, but is mounted in the front of the vehicle. This will provide additional protection to the three crew members and nine passengers. It features both active and passive protection systems, a 2A42 thirty-millimeter cannon, and two Kornet-EM antitank guided missiles.

First seen in the 1980s, the Ka-52 Alligator attack helicopter has undergone a series of improvements to keep it viable—and lethal—over today’s battlefield. Like the U.S. Army and its AH-64E attack helicopter, the Russian Ground Forces have elected to eschew an entirely new airframe and simply upgrade an older one.

Basic armament for the Ka-52 consists of a single 2A42 thirty-millimeter cannon—the same gun that appears on the T-15 Armata. A pair of stubby wings on either side of the cockpit has a total of six hardpoints capable of carrying a combination of Vikhr or Ataka laser-guided antitank missiles, Igla air-to-air missiles, rocket pods, heavy machine gun pods and external fuel tanks. Two VK-25000 turboshaft engines give the Ka-52 the ability to operate at altitudes of up to fifteen thousand feet.

The Soviet Union developed a number of short-range tactical ballistic missiles during the Cold War. Useful as long-range artillery, they were meant to attack enemy command-and-control centers, fixed air defenses, air bases, and other critical military targets. The 9K720 Iskander missile is the latest in a long line of missiles, and incorporates unprecedented accuracy, range and firepower.

Twenty-four feet long and weighing 8,400 pounds, Iskander is carried and launched from an 8×8 armored vehicle. Iskander can carry a munition payload of 1,000 to 1,500 pounds, including high-explosive, submunition or fuel-air explosive warheads. The missile has a range of 372 miles, and thanks to GLONASS and GPS guidance, can place its warhead within five to seven meters of the target 50 percent of the time. This makes Iskander a powerful tool for attacking high-value targets on short notice.

The Dragunov sniper rifle has been in service since the 1970s, equipping about one soldier per platoon in the Soviet Army. In that sense, the Soviets were far ahead in putting dedicated marksmen in their main-line army units—a practice the United States Army didn’t put into place until the mid-2000s. A replacement rifle, the SVK semiautomatic sniper rifle, has just been announced and may have been worth the wait.

The SVK rifle has just been announced by Kalashnikov Concern, the state-owned small arms factory. The sniper rifle is chambered for 7.62×54R ammunition, the same as the SVD, and can use SVD magazines. The chassis is made of polymer, and within it lies a short-stroke gas operating system with rotating bolt. In that sense, the rifle’s internals are much like the Dragunov.

Standard accessories for this new rifle include a detachable bipod, sound suppressor, scope, and infrared sight. The rifle has an adjustable gas system to ensure reliability while using the suppressor. The stock folds to the side for transport, particularly in airborne operations.

The rifle is currently undergoing factory trials, and could easily equip the entire Russian Army by 2030.