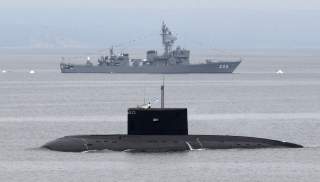 In recent years, Russian Federation borrowed one great idea from the United States — creating a federally funded center for breakthrough and innovating technologies. The Foundation of Advanced Studies — basically the Russian DARPA — launched in 2013.

The FAS stays busy these days with a variety of projects that include unmanned and robotic technologies that the institution hopes will push the envelope and give Russian military and it security establishment a qualitative edge.

Much like the Grand Challenges administered by American DARPA, the Russian institution is calling for applications for the first-ever country-wide student competition in marine robotics, to be held at the Far Eastern Federal University in September 2018.

What’s obviously different about this particular competition is that it will be open to all civilians, in contrast to the limited and classified nature of other unmanned robotics developments taking place across Russia’s military-industrial complex. FAS is looking for fully autonomous and remote-controlled — “tethered” — unmanned underwater vehicles, or UUVs.

According to the  Foundation, “teams with autonomous robots will have to perform five specific tasks: entering a given area, moving along the cable line, searching for objects and marking them, passing through the obstacle gate at a given depth and accessing the hydroacoustic beacon.”

For the remote-controlled UUVs, FAS envisions four tasks. Detecting an object, finding an inscription on it and reading it, deliver a marker to the sunken object and attach a hose simulating the pipeline. To complete all tasks, the teams are given just 20 minutes, with the maximum vehicle weight capped at around 50 kilograms.

The competition’s requirements track closely with the current tasks performed by Russia’s domestic and imported surface and underwater unmanned vehicles. As of today, the majority of the work performed by these technologies includes providing Russian navy and its forces with greater situational and informational awareness, with a good share of such vehicles designated to de-mining and investigative duties.

Unmanned underwater systems are also becoming a key piece in the country’s emerging maritime and border defense, with recent public statements that such vehicles may help guard the nation’s large land and maritime borders and approaches.

Following Russian president Vladimit Putin’s March 1, 2018 announcementthat his country will soon field a nuclear-tipped and nuclear-powered underwater vehicle capable of traveling anywhere  across the globe, there probably won’t be a lack of student participants in the FAS competition. Current positive attitude by the Russian people towards their military are at their highest in many years, and patriotic sentiment drives many young people to join the military or its affiliated institutions.

The Russian military is also keen to tap into the still-vast intellectual potential across the country’s many universities and colleges. In fact, Russian media has been abuzz with the news that Defense Minister Sergei Shoigu may actually lead FAS’s board of directors, potentially establishing a direct line of communication via its leadership between the Foundation and the Russian president.

FAS is also pushing various research and development centers, as well as military-industrial enterprises, to develop new ideas and concepts of USVs and UUVs. Another technology competition will take place in the summer of 2018.

In the meantime, the Russian ministry of defense is holding a competitionto develop artificial intelligence technologies and concepts, with winning designs also to be presented at the Army 2018 expo in August 2018. The ministry is opening the competition to “small innovative enterprises, design bureaus, individual inventors, young scientists and students, as well as employees from Russian military’s scientific companies and units.”

All this activity by the FAS and the Ministry of Defense point to a concerted government effort to tap into country’s vast intellectual and innovation potential and to give a much-needed platform for young inventors to showcase and test their concepts. Russia is keen to rapidly develop, test and ultimately procure emerging technologies that will give it a qualitative edge on the future battlefields.

Unmanned concepts are given a lot of attention these days, with the competition heating up not only between and for young student minds, but among the current and emerging powers keen to exploit new technology as mission multipliers for their military and geopolitical goals.

Samuel Bendett is a Research Analyst at the CNA Corporation and a fellow in Russia Studies at the American Foreign Policy Council. The views expressed here are his own.