The Russian Military Wants to Upgrade Its 'Eyes' and 'Ears' 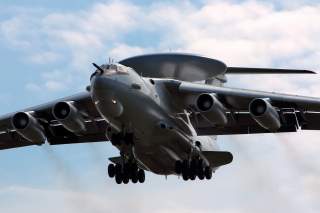 Russia will start developing a new Airborne Warning and Control System (AWACS) aircraft called the A-100 to replace the long-serving Beriev A-50 Mainstay next year. The new platform will be based on the Ilyushin Il-76MD-90A military transport aircraft and will feature completely new systems.

According to Alexander Yakunin, general director of the United Instrument Manufacturing Corporation, the new Russian aircraft will have a completely new radar and sensor suite. Along with the new sensor suite will come new a new computer architecture and new workstations for the crew. The resulting aircraft is expected to have a much greater capacity for managing the battlespace compared to its predecessor.

“The A-100 will be two to three times more powerful than its predecessor,” Yakunin told the Moscow-based TASS News agency. “Currently, the functionality of the new system is being tested with the help of a flying laboratory, which was created on the basis of an old A-50 aircraft that first flew earlier this year.”

The flying testbed is necessary to reduce risk for the production model A-100 when it enters development in 2017. The testbed will be used to verify that the A-100’s systems will not interfere with each other. “It is verifying the electromagnetic compatibility of all the onboard systems, protocols and modes of information exchange and helping to solve other design problems,” Yakumin said. “This is invaluable information which will help to ensure maximum readiness of the first production aircraft A-100—which is based on the Il-76MD-90A platform—for flight tests that are scheduled to start next year.”

When the new A-100 does finally fly next year, it will likely bear resemblance to the upgraded A-50U Mainstay that is currently in service. The biggest improvement will in terms of the avionics. The Russians are expected to integrate a JSC Vega Radio Engineering Corporation Premier active electronically scanned array (AESA) radar onboard the A-100.

The radar configuration is similar to the hybrid approach found onboard the Northrop Grumman E-2D Advanced Hawkeye—while the Premier will rotate mechanically, but the beam will be electronically steered in the elevation and horizontally across its field of regard. The new radar should offer an enormous improvement in detection and tracking capability against both air and surface contacts compared to the current A-50. However, it is unclear how well the new system will compare to existing Western systems such as the U.S. Air Force’s E-3 Sentry.

It is unclear how many A-100s the Kremlin will ultimately buy. The Russian Air Force has roughly 40 A-50s currently in service; it is likely that if funding is available, Moscow will replace the entire fleet with the new aircraft. Only time will tell if that will actually happen given Russia’s precarious economic condition.