The Russian Military's Greatest Enemy (And Its Not America) 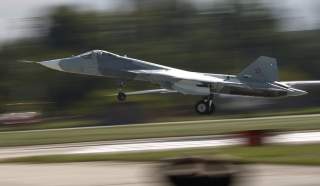 For several years now, Moscow has been trumpeting its development of sophisticated next-generation weapon systems that finally put the superiority of Western counterparts into question. And much of the new hardware appear to have NATO militaries worried.

If you believe Russian state media, hordes of new super weapons are just around the corner, always just a few years away from becoming operational. Then reality—in the form of defense budgets—sets in.

The new T-14 Armata tank was unveiled to much fanfare in 2015 boasting promising new features including an unmanned turret, dense multilayered armor, a more powerful 125mm main gun, and a revolutionary active protection system. And any number of articles would inform you that 2,300 T-14s would be built by the year 2020, so NATO tankers beware!

However, British defense analysis estimated that Russia was unlikely to produce more than 120 T-14s per year. In fact, that estimate proved too generous. In August 2017 the deputy defense minister announced that 100 T-14s would be produced by 2020. So that initial announcement was slightly off by a factor of 23.

There is also the T-15 heavy Infantry Fighting Vehicle (IFV) based on the Armata chassis, which would potentially become the most well-protected armored personnel carrier in service.

But one little detail—so far, none have been ordered for production.

What about the PAK-FA T-50 stealth fighter, now designated the Su-57? This supermaneuverable stealth jet promised to bring the Russian Air Force (the VVS) a deadly fifth-generation air superiority fighter—and it is now scheduled for delivery in 2018 or 2019.

Specifically, twelve of them will be delivered. The technology for a fully-capable PAK FA simply won’t be ready until the 2020s once upgraded Saturn turbofans are ready. The aircraft entering service will make do with inferior AL-41 engines that produce insufficient thrust.

A dozen stealth fighters will not turn the tide in an air war with NATO, though they could have their uses, perhaps serving as sneaky hitmen targeting vulnerable backfield tanker and AWACS support aircraft. On the other hand, the Su-57 is not ideal for deep penetration raids over hostile territory because its rear aspect is not especially stealthy.

These projects will at least result in the production of real hardware that will enter service in a few years, albeit in numbers too small to really affect the military balance. But then there is a whole slew of other programs that, despite extravagant boasting on international outlets, so far exist as prototypes or even just design documents and schematics.

For example, take the plans to launch enormous new nuclear-powered Lider-class destroyers by the mid-2020s that would vastly out-gun and out-bulk even the large Ticonderoga-class cruisers in U.S. Navy service.

But this May, it was revealed that the mega-destroyers are not even budgeted for in the 2018–2025 defense plans. But just so you don’t lose faith, in June a Russian admiral announced that unfunded nuclear-powered destroyers are still going to happen, somehow. He also promised a new carrier—another item nobody expects will actually materialize in the next decade because the Russian Ministry of Defense has so far shown little interest in a new one.

Then there is the S-500 Prometheus surface-to-air missile system, which on paper amounts to an evolved S-400 SAM armed with new high-flying hypersonic 776 N missiles to serve in the anti-ballistic missile role. In development since 2009, the Prometheus was supposedly going to enter service in 2016 or 2017.

Fast forward to this July 2017, when a new briefing by the defense ministry announced that S-500 was “on schedule,” with “some elements” of the system currently undergoing testing and the first systems slated for delivery to air defense units in 2020.

And there are countless additional projects including the Pak DA stealth bomber, huge upgraded Tu-160M2 Blackjack bombers, and a supposedly hypersonic space-flight capable MiG-41 to replace the MiG-31 Foxhound interceptor. These can be counted in addition to useful, though less space-agey, new programs to upgrade its T-90 tanks with T-14 technology, and produce new Boomerang and Kurganets armored troop carriers and BMD-4M airborne fighting vehicles.

Russia is developing this proliferation of different weapons on a defense budget that amounts to just 2.84 trillion rubles—equivalent to roughly $50 billion U.S. dollars, though some counts place the total over $60 billion. That budget has been shrinking between 3 to 7 percent for several years in a row due to falling oil prices and sanctions put in place due to Russia’s seizure of Crimea from Ukraine. (A widely circulated claim that it fell by 25 percent in 2017 was inaccurate.) By comparison, the U.S. military budget amounts to around $580 billion in 2017, and China’s is around $200 billion.

If large numbers of hi-tech tanks and jet fighters don’t seem to add up with a contracting defense budget, that’s because…they don’t. Of the new systems that do make it into production, many are only being ordered in boutique quantities.

But Moscow is happy to boast about how it will soon possess hordes of advanced weapons in order to enhance the perception of its military power at home and abroad, even if many of those systems either are far from ready for mass production or will never be produced at all. Furthermore, state-run media can basically serve as advertising agencies for foreign weapon sales, which are an important source of income.

Of course, the Western press can also be charged with puffing up its domestic military hardware, and Pentagon weapons programs such as the F-35 Lightning stealth fighter have gone over budget, suffered major delays, and seen reductions in planned numbers and capabilities.

But there is an important difference. The American and European press is willing to tear into and debate controversial programs such as the F-35, the V-22 Osprey vertical lift and the Littoral Combat Ship. When they fall behind schedule, fail to perform, or go way over budget—and they frequently do—they often elicit complaints and cries for accountability, not a glib revision of previously established facts.

Threats of Today, Not Tomorrow

Excessive focus on future military tech diverts attention from the current and near-term strengths of the Russian military. To begin with, Moscow has proven a capable practitioner of new forms of cyber and so-called hybrid warfare. Money invested in hacking groups like Fancy Bear and warehouses full of paid internet trolls have surely done more to destabilize Europe and the United States than a few new stealth jets and tanks. Likewise, pro-Russian media outlets—both from official organs like Russia Today as well as proxies—has been weaponized to disseminate propaganda over social media emphasizing the weakness of Western societies and the strength of Russia—employing mixed and often contradictory messages tailored to appeal to both left- and right-wing ideologies.

These new “soft” technologies and tactics segue into those with battlefield applications, including varieties of drones and electronic warfare systems designed to disrupt Western communication networks and sensors. Such systems can be produced and fielded more quickly and cheaply than new tanks and jet fighters. Russian military operations in Ukraine and Syria have already demonstrated how these would be applied as force multipliers.

The Russian military is also doing just fine with various types of missiles. Forget the S-500, the S-400 SAM system already poses a significant challenge to contemporary fourth-generation fighters. The Iskander ballistic missile could hit European capitals from the Russian enclave in Kaliningrad. The Kaliber cruise missile is a combat-tested as Tomahawk-equivalent, and comes in a deadly anti-ship variant which the Russian Navy has installed on small corvette-sized ships, giving them heavier armament than anything on the U.S. Navy’s frigate-sized Littoral Combat Ships. And of course, Russia’s nuclear ballistic missile arsenal remains the underlying concern in any clash with Moscow, regardless of its conventional forces.

Furthermore, the Russian armed forces have undergone reforms towards becoming a smaller, more efficient force, particularly after an underwhelming performance in the Russo-Georgia war of 2008. Training hours for fighter pilots and tactics employed by frontline ground forces have improved from their low point in the 1990s and the embarrassing First Chechen War.

Nonetheless, 70 percent of personnel remain conscripts serving a twelve-month term of service, roughly half of which time is spent training to achieve basic proficiency. This means that while the Russian military does field well-trained elite units for special operations, most of its rank-and-file still perform below the standards of professional Western volunteer forces.

Meanwhile, investments in numerous next-generation weapons program suggest that Moscow is interested more in developing new technologies for tomorrow rather than today—without committing to full-scale production to replace its huge arsenal of Cold War-era tanks and jets. This might explain why there are apparently more than a half-dozen fighter jets currently either in development or in limited scale production, and three or four new families of APCs slated for deployment, albeit sharing the same turret in common. The Russian defense establishment apparently prefers to diversify its options rather than concentrate on maximizing short-term production.