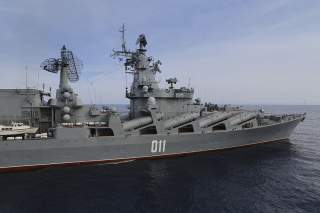 While the Cold War-era Soviet Navy built a massive surface fleet to challenge the dominance of the U.S. Navy on the open ocean, that once mighty armada has all but disappeared. Much of the former Soviet Navy has been scrapped, sold off, or rusted away in port since 1991. As such, the present day Russian surface fleet is a pale shadow of Adm. Sergey Gorshkov’s vision of a blue water navy. Its biggest threats are not NATO or the United States, but rather a shambolic shipbuilding industrial base and poor maintenance. Indeed, more Russian warships have been lost to shipyard fires than any enemy action.

“Essentially, we have the disappearance of the Soviet blue water navy and the transition to something like a green water navy,” Michael Kofman, a research scientist specializing in Russian military affairs at the Center for Naval Analyses told The National Interest.

The modern Russian surface fleet retained traditional Soviet tasks of defending the ballistic missile submarine force, providing sealift on Russia's periphery and local defense. Its focus is on two core functions, one practical and the other symbolic.  It's debatable which is truly more important to Moscow. The first is defending Russian maritime approaches i.e. sea denial near its borders - the other is to act as a status symbol for the Kremlin’s great power image. “You have a couple of large platforms that you use for status projection, which is why Russia blows so much money to maintain its battlecruiser class of ships—the Kirovs,” Kofman said. “The biggest reason the Russians have spent this much money on the Navy is because to be a great power, you have to have a Navy—it confers status and allows you to project power outside your region.  Even if that capability is constrained, and perhaps mostly demonstrative, it is quite effective in showing others that you're something more than a regional actor.”

The Russians are spending huge sums to modify their Project 1144 Orlan or Kirov-class ships with the latest weaponry—including Kalibr long-range cruise missiles, P-800 Oniks supersonic anti-ship missiles and a naval version of the S-400 air defense system. The expensive upgrades—which cost as much as  $2.1 billion each or slightly less than the modernization plans for the Black Sea fleet—will turn the Admiral Nakhimov and eventually Pyotr Velikiy into “Star Destroyers” that would be used to showcase Russian power and prestige around the globe.

Unlike the U.S. Navy, Russia has to pack its large combat ships like the Kirov-class or its sole remaining carrier—Kuznetsov—with weapons because its fleet does not have the assets to provide sufficient escort vessels. Russian warships will typically venture out in pairs, escorted by an oiler and an ocean-going tug. “The ‘dreaded’ Russian Navy never goes out without a tug in case a ship goes down,” Kofman said. “That tells you a lot.”

As for the rest of the fleet, Russia is largely abandoning the Soviet practice of building full-sized cruisers and destroyers. The planned 18,000-ton Lider-class nuclear-powered multimission destroyer—even if it is laid down next year as planned—will take years to complete. But there is an equal likelihood that it might never be built. “It’s a dream for the future,” Kofman said.

Instead of cruisers and destroyers, Russia is focusing on smaller, but much more capable and heavily armed frigate and corvette-class vessels. Russia is building two frigate classes—the Admiral Gorshkov-class and the Admiral Grigorovich-class—which both displace under 5,000-tons, but unlike their Soviet-era predecessors, these are multi-mission warships that pack a significant punch. But the problem for the Russian Navy is that the vessel’s gas-turbine engines are built by Zorya-Mashproekt in Ukraine—a legacy of the Soviet Union. “The frigate program has run into a mess because of Ukrainian engines,” Kofman said. “They’re looking at substantial delays of probably at least five years.”

On the positive side, the Russians have learned to maintain and overhaul Ukrainian-made engines onboard their existing ships, Kofman said. However, the solution was to hire as many Ukrainian technicians as possible who were willing to work in Russia. Kofman noted Russia has not yet been able to indigenously produce its own gas turbines to replace those currently installed in its fleet. But Moscow is exploring the purchase of Chinese-built engines (which are “derived” from German engines made by MTU and China similarly benefitted from extensive cooperation with Ukraine in this sphere).

In addition to the frigates, the majority of Russia’s surface fleet construction has focused on corvettes, which are tiny, but pack an oversized punch. Unlike many larger U.S. Navy vessels—including the Littoral Combat Ship—Russian corvettes displacing around 2000-tons carry long-range land-attack cruise missiles—as the Caspian Sea flotilla demonstrated in Syria. Two major Russian corvette classes include the Steregushchy-class and the Buyan-M class. “You looking at a Navy that’s very green water, small ships that are not designed to go sustain themselves out on the ocean, but they’re going to have these really nasty Kalibr missiles on them,” Kofman said.

But the problem that plagues the Russian Navy is that its builds vessels in boutique quantities before moving onto a new class. That results in a logistical nightmare in terms of sustaining those vessels. One good example of that is the Ivan Gren-class tank landing ships, which are large and capable—but the Russians are building exactly two of those ships. That’s despite the fact that Moscow needs to replace the rest of its aging landing ship fleet, Kofman said. In fact, there are a host of vessel classes within the Russian Navy that were—and continue to be—built in pairs. “The Russian Navy suffers horribly from this distributed classisity problem,” Kofman said.

But while quality control or the lack thereof and corruption are problems, the single most fundamental—and easily solvable—problem with the Russian Navy can be summed up in one word: fire. The Russian fleet has lost more ships to fire than any other single cause. In June, a brand new state-of-the-art minesweeper lit up in the shipyard during construction—and while the Russians say the vessel can be salvaged and delivered on time, Kofman said that it is highly unlikely that will happen. Another incident was the November 2014 fire in Sevastopol that destroyed the Kara-class cruiser Kerch—which many regarded as the pride of the Black Sea fleet. “The Russian Navy's biggest enemy isn’t NATO, but its own maintenance and repair crews,” Kofman said.

But while the Russian surface fleet is a shadow of the former Soviet armada, it does afford the Kremlin significant combat capability—even given its limitations and materiel condition. The Russian fleet will likely never again possess the kinds of capabilities that its Soviet forbearer did, it will move to smaller but more capable platforms and use technology to make up the difference—less quantity and more quality. New weapons like the Kalibr cruise missile allows the Russian fleet to hold Western targets at risk from extended ranges—which means that from the Kremlin’s point of view—it’s worth the money. “The surface combatant fleet can do a lot, frankly, hardly having to leave port,” Kofman said. “It now has the missile range to do land attack and anti-ship pretty far out.”

This first appeared in July 2016 and is being reposted due to reader interest.