The Seven Faces of Barack Obama 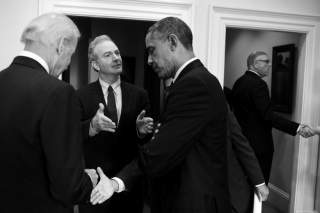 The last time President Barack Obama gave a speech at the U.S. Military Academy at West Point, it was December 1, 2009.  At that time, the war in Afghanistan was the only foreign policy issue that Americans across the country could talk about.  The war by most indications was going badly, or at least not well enough, fast enough, and President Obama had to make a monumental decision at a pivotal moment in his young presidency: whether to send tens of thousands of additional U.S. troops to the war zone.  In front of a national audience and thousands of West Point cadets—some of whom would be deployed to Afghanistan in the future (and four of whom would be killed serving the country)—Obama doubled down on a counterinsurgency-counterterrorism hybrid strategy that he labeled at the time as the best option the United States could take to beat back a resurgent Taliban insurgency.

Over four years later, President Obama returned to West Point with Afghanistan looking a whole lot different (just a day earlier, Obama announced in the Rose Garden that practically all U.S. troops would be withdrawn from Afghanistan by 2016) and with a different goal in mind: defending his foreign policy record.

To the president’s supporters, Obama said what he needed to say to fight back against Republican critics in the U.S. Congress and some within the Washington foreign policy establishment who have been complaining about his administration’s lack of focus in world affairs.  To some, like frequent critics John McCain and Ed Royce, Obama’s address was more of the same: long on rhetoric, short on action.

But neither side has it quite right. The real problem with president Obama’s commencement address to West Point’s latest graduating class is that it was a perfect microcosm of his many personalities and traits as Commander-in-Chief.  Obama may have hoped to lay out a broad vision of the world for the rest of his term, but in doing so, he exhibited the multiple faces, attitudes, and approaches to the world that has defined his presidency for the past five and a half years. The result has been confusion.

1 – Obama the Campaigner and Self-Promoter:

“When I first spoke at West point in 2009, we still had more than 100,000 troops in Iraq.  We were preparing to surge in Afghanistan.  Our counter-terrorism efforts were on al Qaeda’s core leadership.  And our nation was just beginning a long climb out of the worst economic crisis since the Great Depression.

Four and a half years later, the landscape has changed.  We have removed our troops from Iraq.  We are winding down our war in Afghanistan.  Al Qaeda’s leadership in the border region between Pakistan and Afghanistan has been decimated, and Osama bin Laden is no more.”

“In fact, by most measures, America has rarely been stronger relative to the rest of the world…Our economy remains the most dynamic on Earth; our businesses the most innovative.  Each year, we grow more energy independent.  From Europe to Asia, we are the hub of alliances unrivalled in the history of nations.  America continues to attract striving immigrants.  The values of our founding inspire leaders in parliaments and new movements in public squares around the globe…The United States is the one indispensable nation.”

“[T]o say that we have an interest in pursuing peace and freedom beyond our borders is not to say that every problem has a military solution.  Since World War II, some of our most costly mistakes came not from our restraint, but from our willingness to rush into military adventures.

Like Eisenhower, this generation of men and women in uniform know all too well the wages of war…I would betray my duty to you, and to the country we love, if I sent you into harm’s way simply because I saw a problem somewhere in the world that needed fixing, or because I was worried about critics who think military intervention is the only way for America to avoid looking weak.”

“First, let me repeat a principle I put forward at the outset of my presidency: the United States will use military force, unilaterally if necessary, when our core interests demand it – when our people are threatened; when our livelihood is at stake; or when the security of our allies is in danger.  In these circumstances, we still need to ask tough questions about whether our action is proportional…But America should never ask permission to protect our people, our homeland, or our way of life.”

“On the other hand, when issues of global concern that do not pose a direct threat to the United States are at stake…then the threshold for military action must be higher.  In such circumstances, we should not go it alone.  Instead, we must mobilize allies and partners to take collective action.”

After World War II, America had the wisdom to shape institutions to keep the peace and support human progress – from NATO and the United Nations, to the World Bank and IMF.  Though imperfect, these institutions have been a force multiplier – reducing the need for unilateral American action, and increasing restraint among other nations.

Of course, skeptics often downplay the effectiveness of unilateral action.  For them, working through international institutions, or respecting international law, is a sign of weakness.  I think they’re wrong.”

“I believe in American exceptionalism with every fiber of my being.  But what makes us exceptional is not our ability to flout international norms and the rule of law; it’s our willingness to affirm them through our actions.  That’s why I will continue to push to close GTMO – because American values and legal traditions don’t permit the indefinite detention of people beyond our borders.”

“[B]ecause of America’s efforts – through diplomacy and foreign assistance, as well as the sacrifices of our military – more people live under elected governments today than any time in human history.

I saw that throughout my trip to Africa last year, American assistance has made possible the prospect of an AIDS-free generation, while helping Africans care for their sick.  We are helping farmers get their products to market, and feeding populations once endangered by famine.  We aim to double access to electricity in sub-Saharan Africa, so people are connected to the promise of the global economy.

Foreign assistance isn’t an afterthought – something nice to do apart from our national defense.  It’s part of what makes us strong.”

President Obama tried to soften the critiques from the hawkish, interventionist camp of American foreign policy.  But he may have just opened up another avenue to the same old debate that has been raging in Washington since his first election: what does Obama stand for, and which of his personalities does he see as the most effective for the U.S. national interest and international stability?