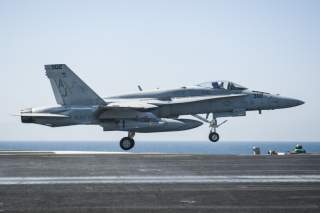 Hanoi is one of the best settings in which to contemplate the limits of American power. The Vietnam War showed that a determined adversary (with substantial help from two major powers) can resist even a massive deployment of hard power by a more technologically able and much richer foe.

I was in Vietnam last week, and it provided an interesting perspective on current debates about the growing strategic competition between the United States and China, and about the role of American power in the world more broadly.

There’s a popular narrative in conservative circles at the moment that says that the blame for recent setbacks lies squarely at the feet of the Obama Administration. Greg Sheridan made that argument pretty forcefully last week:

“…Obama is just presiding over a decline in U.S. influence. He leads a weak administration that is weak everywhere. This does not necessarily represent long-term American decline. It is the weakness of this one administration. … America’s enemies, and the forces generally of violence and disorder, are everywhere encouraged. The U.S. position is weak in eEastern Europe, and Vladimir Putin intensified his campaign in Ukraine after Obama ostentatiously drew a red line in Syria and then decided not to enforce it. Obama is losing influence all over the Middle East, and in Afghanistan and Central Asia.”

(Recommended: Why China Would Crush America in a War)

It’s hard to argue that the world isn’t trending in ways adverse to the interests of the United States (and Australia). But I’m not at all sure that it’s right to place all of the blame on President Obama. Instead, I think that the utility of power is often overestimated, which makes those wielding it look unreasonably ‘hawkish’ when it fails—as was the case for American administrations who oversaw the Vietnam War.

(Recommended: 5 Ways the U.S. and China Could Stumble Into War)

But in Iraq today, the error in withdrawing large scale forces was in the opposite direction, as the Obama administration under estimated the effect of American power on Iraq’s stability. This kind of failure makes the administration look weak. There’s little doubt that keeping the presidential election promise of withdrawing American forces has resulted in a terrible outcome. The resulting bloodshed and chaos was probably avoidable if forces had been in place to resist the initial forays by IS, and it’ll be more difficult and costly to defeat them now.

But Obama’s error in Iraq only compounded a previous error by the Bush 43 administration—which was based on an over estimation of the ability of American power to shape Iraq after the 2003 invasion. Arguably, the neocon-driven overreach we saw last decade led outcomes at least as bad as those following from the current American reticence to use power. But both examples show how tricky it is to evaluate how the application of hard power will shake out in reality.

The other examples that Sheridan presents are far less clear cut. The correct policy response to Putin’s territorial grabs in Ukraine isn’t clear (at least to me). Russia’s interests in Crimea are much more direct and strongly held than America’s, so the willingness to take risks is commensurately higher on the Russian side. Should America be willing to risk a war with Russia over the Ukraine?

I see a similar conundrum in the South China Sea. China regards the area as a primary strategic interest and is prepared to face international opprobrium for its actions there—and is getting a pretty good outcome. Again, it’s not clear to me how American power can be applied to the problem in a way that’s proportional to American interests there, without taking risks that outweigh the potential gains. The right strategy is yet to be found.

The Ukraine and South China Sea both show that even the most powerful states are vulnerable to tactics that chipped away at the periphery of their interests. The interests of Russia and China are more deeply engaged in those regions than America’s, and they have enough power of their own to raise the stakes for the U.S. to the point where the downside risks outweigh the potential benefits.

That’s not to say that there’s no use for power. It can be used successfully in the right circumstances, when the benefits to be gained outweigh the costs the adversary state can impose. Sometimes it’s easy to tell. For example, during the 1990s Kosovo War, Serbia couldn’t seriously resist NATO and its patron state Russia wasn’t in a position to help much, which kept the stakes low for the western alliance. So American and European power was used to end the fighting. And if the stakes are high enough, serious losses can be borne to get the right conclusion—World War II being an exemplar.

The Vietnam War sat somewhere in between. As the local resistance grew, the United States applied increasingly large amounts of hard power—though far short of its full Cold War capabilities—until the balance of outcomes and costs became unacceptable. Then, as now, power wasn’t able to compensate for the simple fact that the other guys cared more. It’s hard to see how that’ll change.