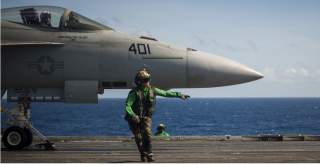 Naval aviation is an inherently dangerous business, but over the course of more than 75 years, through robust procedures, rigorous training and continuous practice, the U.S. Navy has honed its carrier flight deck operations into a well-oiled machine. Accidents do happen, but the Navy is continually working on improving flight deck safety. Every time there is a mishap, the accident is investigated so that procedures can be refined to prevent a recurrence.

But those lessons have often come at price in lives lost, injuries and monetary costs. Hundreds of men have been killed or injured during accidents at sea onboard a carrier. As one now-retired naval aviator told me—with only slight hyperbole: “Every line in the NATOPS manual is written in blood.”

Indeed, the Navy learned many painful lessons during the Vietnam War in the 1960s during a series of fires onboard three aircraft carriers. On Oct. 26, 1966, a magnesium flare that had inadvertently gone off started a major fire onboard USS Oriskany (CVA-34) that resulted in the deaths of 44 sailors and caused 156 others to be injured. Three aircraft were destroyed and three more were damaged in the incident.

During a second incident, on July 29, 1967, a massive fire devastated USS Forrestal (CV-59) during combat launch and recovery operations in the Gulf of Tonkin killing 134 sailors and injuring 161 others. Additionally, 21 aircraft were lost in the blaze—which was traced back to a Zuni unguided rocket was accidentally fired and set off a chain reaction. The fire crippled the carrier, which spent months being repaired.

During the third incident on Jan.14, 1969 —which was also setoff by a Zuni rocket—USS Enterprise (CVN-65) was ravaged by a fire that claimed the lives of 28 sailors, injured 314 others and destroyed 15 aircraft. During the chain reaction that followed, Enterprise suffered from 18 munition explosions and eight holes were blown through the flight deck and deep into the ship. It took more than three hours to extinguish the blaze.

In the aftermath of the fires, the Navy instituted major changes to its damage control and weapons handling procedures. The Navy also modified its carriers with a so-called “wash down” system to help prevent such incidents from happening again. While the Navy took corrective action—the lessons learned came at a price—hundred of death and injures, the loss of dozens of aircraft and severe damage to three carriers.

But while the three Vietnam-era fires were some of the worst post-WWII disasters onboard a carrier that resulted in massive changes in procedures, practices and hardware, there have been more subtle changes too. The Navy is continually working on improving safety on the flight deck. Indeed some of those practices involve things as simple as avoiding the area around the air intake of an operating jet engine. Indeed, during my very first days of ground school many years ago I was shown whar was a Navy safety video of a crewman who was sucked into the jet intake of a Grumman A-6 Intruder on a carrier flightdeck. While the crewman miraculously survived, the video highlights hazards of working on the ramp (or flight deck in this case).

But nonetheless, despite the best efforts of the crew, accidents–even if they are preventable—inevitably happen in any complex environment. Recently, I spoke to an old friend who is a veteran naval aviator who describes one such accident. “We lost a [Grumman F-14] Tomcat in 2002 after the first OEF [Operation Enduring Freedom] cruise when the tail-hook snapped off during recovery,” he told me.

Another senior naval aviator mentioned that the Navy has learnt to have an “abundance of caution” over the service’s more than 75 years of carrier aviation experience as he explained why service rarely sees the type of problems that the Russians have been recently experiencing onboard Kuznetsov. “We have 75 plus years of experience with carrier aviation. There are a multitude of safeguards and interlocks to minimize error and ensure a successful arrested landing,” the naval aviator said. “Definitely an abundance of caution.”