The Shocking Truth: A Trump Presidency Could Be Good for ANZUS 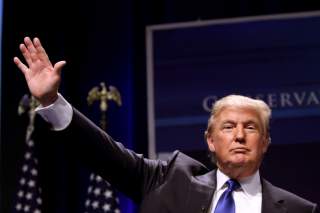 “Should Donald Trump be elected U.S. President, Australia should tear up the ANZUS alliance,” leads this article by veteran analyst and political reporter, Daniel Flitton.

He doesn’t hold back:

“Malcolm Turnbull or Bill Shorten could be prime minister by this time next year, but this is a simple bipartisan choice. If Trump wins the keys to the White House, there will be no need for a congratulatory phone call. Just get the clock ticking on the 12-month waiting period required to formally withdraw from the treaty.”

This remarkable and uncompromising statement demands that Australia end a successful alliance that has served us well for more than 60 years.

Not for reasons relating to Australia’s strategic circumstances, mind you. Not because the U.S. would be pulling back from the Asia-Pacific, or because Australia’s future in Asia would be deemed to require a more independent stance. No, instead the trigger would be the election of a U.S. President that some (ok, many) Australians would find objectionable.

First, let’s consider at this point in the election cycle the probability that Trump will become the Republican nominee.

When Trump first announced his candidacy, pundits from across the political spectrum boldly stated that this was “silly season” in U.S. politics, and that there was “zero chance” of Trump becoming the Republican nominee, let alone of him winning the presidency.

Despite Trump’s stratospheric poll numbers, such views have continued to dominate.

At first, there were good reasons to believe them. After all, other than Bush, Trump was the only name anyone in the country recognized. It was assumed that as more “serious” candidates entered the fray, Trump would quickly fade.

Even as Trump’s poll numbers proved sticky, many strenuously argued that he would quit the race. After all, campaigns are incredibly expensive, and just how much money would be Trump willing to pour into a losing bid? Well, so far, none. Given his celebrity status and the ratings he pulls for networks, Trump has been saturated in media coverage. As he boasts: “I’ve spent the least money and have the best poll numbers.”

Over the past month or so most pundits have begrudgingly moved from insisting Trump has “no chance” of becoming the nominee, to there being “only a slight chance.” The overwhelming majority, however, still rank multiple candidates well ahead of him. To my mind, this view is now desperate to the point of delusive.

Trump is likely to win the nomination. Here's why:

1. Bush is tanking, but has all of the money:

Raising huge donations early was a deliberate tactic employed by the Bush camp to intimidate potential rivals out of the race. Bush’s campaign is terminal, but with the money already raised he will probably linger on, keeping votes and donors from his infinitely more promising Florida padawan, Marco Rubio.

2. Republican voters have been well trained to hate government:

Every Republican says “government is the problem.” Problem is, they are the government. Ergo, why not vote for an outsider? Enter Trump, Carson, Fiorina.

3. Trump is an entertainer:

Being an entertainer immunizes Trump from scandal. Given the bombastic things he’s already said, if Trump’s popularity hasn’t waned by now then it won’t be scandal that brings it unstuck. On the contrary, every time he says something outrageous, people are reminded that Trump is not a typical politician. There is only one risk to Trump’s long-term popularity, and that's he becomes boring. As it is, being an entertainer is no drawback. We’re frequently reminded that Ronald Reagan was a movie star, after all.

4.Trump is on message:

Pundits generally dismiss Trump’s supporters as mercurial or just plain ignorant; they cannot understand why any sensible, reasoned individual would do anything but dismiss Trump out of hand.

The fact is that inequities in American life are now so bad, and so entrenched, that no U.S. president is going to significantly change this in a maximum eight year term. The American people know this. Trump’s promise to “make America great again” might just be pillow talk, but at least it’s inspiring. Other candidates are tarnished by tepid solutions that just remind voters of their problems.

5. Trump has the energy:

The U.S. election cycle is a marathon. Staying power is a critical trait for any presidential hopeful. Early on, one of the things pundits argued was that Trump wouldn’t be prepared for the scrutiny of a campaign. Instead, Trump has proven himself among the hardest working candidates, doing interviews and speaking at rallies round-the-clock. Indeed, just hours after the latest Republican debate Trump was in New Hampshire speaking to business leaders at a ‘politics & eggs’ breakfast.

6. Trump has the votes where it counts:

Republican candidates have only ever been successful in securing the nomination if they’ve taken either Iowa or New Hampshire in the primaries. In Iowa, Trump has a tough race against Ben Carson. Iowa has a large number of conservative Christian voters among whom Carson is the undisputed favourite. Moreover, Trump hasn’t exactly draped himself in glory among Christian voters by the manner in which he’s been attacking his pious rival, as well as making derogatory comments about Iowans generally.

Still, Trump remains competitive in Iowa, and even if he loses there he retains a near unassailable lead in New Hampshire. These primaries are quickly followed by much larger delegate sweeps in states like Nevada and Texas, where Carson’s vote languishes. Trump will certainly outpace Carson, and a third candidate would have to make electoral history to win the Republican nomination against this tide of early momentum.

So, yes, Trump could become the Republican nominee. And yes, there is also a chance he could also beat Hillary Clinton in the election.

Let’s then assume that in early 2017 Donald Trump is sworn in as the 45th President of the United States. What would this mean for Australia?

Here I am going to commit heresy, especially as I am firmly on the progressive side of the political spectrum. While I have strong differences with Trump across a range of policy areas, for Australia and the alliance, I have little concern. Indeed, under either Trump or Clinton, ANZUS is likely to enjoy a very bright future.

I say this because on foreign policy Trump is calm, sensible, realistic, and firmly rooted in strategic logic.

On Syria, Trump is happy to work with Russia, and has long been pragmatic about joining Assad in common cause to defeat ISIS.

On Ukraine, Trump is supportive of NATO allies, but is likely to put significantly more pressure on the Europeans to invest in their own defense to resist Russian aggression.

Even on Cuba, a hot button issue for most Republicans, Trump strongly endorses opening relations.

With regard to the nuclear deal with Iran, Trump is critical of Obama’s apparent desperation to conclude an agreement. But, unlike many Republican rivals who pledge to ‘tear it up’, Trump has acknowledged he’d be bound by the agreement.

Trump also distinguishes himself from his Republican rivals by emphasising the strategic priority of the Asia-Pacific, rather than Europe or the Middle East. This is where the real long-term challenges lie, and it's also where Australia wants the U.S. to be.

Whatever else one might say, the man is no fool. The real Trump is very cunning and understands exactly what he’s doing. To that end, he delivered a lengthy speech in Texas the other day. One excerpt in particular is worth watching. Start at the 28:05 min mark and watch to 35:25 min. Trump predicts that under his presidency America's enemies will one day be saying: “This guy is freaking crazy. We give up. We give up.” This could just as easily be said by Trump’s critics.