The Skripal Controversy: A Guide for the Perplexed 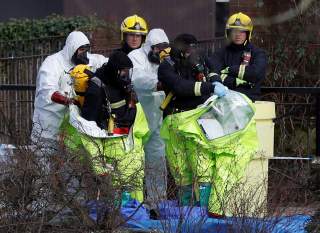 Hindsight in the Skripal affair is proving to be much less than twenty-twenty.  More than a month after the ex-Russian spy and his daughter were discovered slumped on a park bench in Salisbury, things are getting murkier rather than clearer about what actually happened and who was behind it.

Within days of the attack, UK Prime Minister Theresa May announced that the Skripals had been poisoned with a Russian-produced nerve agent and pointed her finger squarely at the Kremlin.  But that early certainty crumbled when Gary Aitkenhead, the chief executive of Britain’s Defence Science and Technology Laboratory, denied UK Foreign Minister Boris Johnson’s claim that his lab’s scientific analysis had narrowed the list of potential perpetrators to the Russian government.  The attack “probably” came from a state actor, he said in a televised interview, but forensic evidence alone could not prove even that.  One could scarcely escape the impression that Aitkenhead was attempting unsuccessfully to navigate between political pressure from above to support the Tories’ indictment of Moscow and adamant refusal from working-level scientists below to go farther than the evidence would allow.

Meanwhile, Russian media and government officials seemingly have been engaged in an all-but-declared competition to provide the most outlandish counter-explanation for the attack, alternately blaming MI6, the CIA, Sweden, and others for conducting the chemical attack as a “provocation” meant to frame Russia and facilitate Western efforts to weaken and overthrow the Putin regime.  Foreign Ministry spokesperson Maria Zakharova suggested on Russian national television that euthanizing Skripal’s pets was part of a British plot to cover up evidence in the case.  Even those inclined toward skepticism of the UK’s accusations could not help suspecting that the Kremlin itself must be covering up something, even if what that is remains unclear.

Identifying where truth lies amidst conflicting allegations and incomplete information is one of the most basic tasks of any analyst of foreign affairs.  The chief danger in such an endeavor is confirmation bias, the tendency to fixate on evidence that supports an explanation we think is most likely without recognizing that it is often also consistent with alternative hypotheses.  To combat this bias, intelligence analysts often employ a technique called “analysis of competing hypotheses.” How might we employ this approach to puzzle through the possible explanations for the Skripal affair?

The first step in an analysis of competing hypotheses is to assemble a list of plausible explanations.  This is particularly important in the case of Skripal, as the UK’s initial assurances that only the Russian government “had the means, motive, and opportunity” to carry out the attack have fallen apart under scrutiny.  While it is certainly true that the Russian government should be a prime suspect in the affair, we have learned in the past few weeks that other governments, and possibly some non-state actors, had access to Novichok, the family of Soviet-developed nerve agents allegedly used against the Skripals.  The apparent sloppiness with which the operation was conducted (including the failure to kill the targets, who are both recovering) also raises doubts about the motives or professionalism of whatever group was behind it.

In addition to the preferred UK narrative – that Putin ordered the attack to intimidate both the West and would-be Russian traitors – there are at least two other plausible explanations for what occurred.  The first has its origins in the shadowy nexus of Russian business, crime, intelligence, and politics. Skripal began spying for MI6 during the 1990s, a time when it was not uncommon for active and retired Russian intelligence officers to provide their services to private Russian businessmen, who themselves were key players in the rough-and-tumble mix of Yeltsin-era politics and corruption.  The UK would almost certainly have asked him to report on factional in-fighting and corruption within Russia’s intelligence services and on such sensitive matters as the activities and political connections of the Chechen mafia. Skripal could well have made some powerful enemies during that period who might have a strong incentive to demonstrate the price of crossing them in a particularly gruesome way.  Attacking him while he was within the relatively secure confines of the Russian penal system might have proved a more challenging environment than Salisbury.

The second hypothesis reflects the fact that several other countries and non-state groups benefit from increased tensions between Russia and the West.  The closer that Russia and the West get to confrontation, for example, the more likely the US and NATO are to provide strong military backing to Ukraine in its war against Russian-backed rebels in the country’s east.  ISIS and Syrian paramilitary groups increase the chances that the US and Europe will intervene against the Russian-backed Assad regime if they can persuade the West that Russia both uses and abets Assad’s use of chemical weapons.  China and North Korea each benefit from heightened strains between Washington and Moscow. Could the Skripal attack have been a false-flag operation aimed at advancing the interests of third countries or groups such as these?

The second step in the analysis of competing hypotheses is to assemble relevant evidence and categorize it as either strongly consistent, weakly consistent, or inconsistent with each explanation.  The technique is meant to zero in on evidence that disproves a hypothesis, or which is consistent with only one possible explanation. There is not much publicly available evidence in the Skripal case, but such that there is suggests none of the alternative explanations can be ruled out at this stage.

The available evidence is largely consistent with the hypothesis that Putin ordered the attack, but it is almost entirely circumstantial.  Forensic analysis reportedly shows that the attack featured a nerve agent developed in the Soviet Union, suggesting that the Russian government would have had the knowledge necessary to employ the poison against the Skripals.  British press reports claim that the UK government secretly obtained a Russian intelligence manual that outlines techniques for using poisons to assassinate enemies abroad.  That Putin regarded Skripal as a traitor, and that a string of Russians that he would have seen as enemies of the state or personal opponents have been killed, are undoubtedly true.  Russia has been its own worst enemy in the Skripal affair, offering an inconsistent set of implausible explanations for what occurred, which has only fueled suspicions of Kremlin culpability.

But having an incoherent public relations line is also consistent with a Russian government caught by surprise and scrambling to explain events it had not anticipated.  The failure of the attack to kill its targets is inconsistent with the argument that only a highly professional state intelligence organization could have carried it out, and the claim that only the Russian government had access to Novichok formulas and samples has been shown to be erroneous.  What Skripal has been doing that made him stand out among other former Russian spies as a particular target of Putin’s wrath is an important information gap that merits specific investigation.

Moreover, the most prominent Russian victims in the pattern of killings cited as evidence in the Skripal affair – Nemtsov, Litvinenko, and Politkovskaya – were not just opponents of Putin, they were also enemies of Chechen president Ramzan Kadyrov, who is generally acknowledged in Russian circles as the most likely culprit in the murder of Nemtsov, and whose relationship to Putin features an uncomfortable mix of parallel and conflicting interests.  Might Kadyrov and the so-called “Chechen mafia” have had access to Novichok? The Russian opposition newspaper Novaya Gazeta, which has done some courageous investigative reporting on other matters (and employed Anna Politkovskaya prior to her murder), says yes.  In an article published last month, the newspaper reported that court testimony indicates that samples of Novichok had been sold to organized crime figures, including a Chechen, in the 1990s, and that a crime group had used the nerve agent to assassinate a Russian businessman in 1995.  Putin could hardly admit that Kadyrov or other unauthorized Russians might have mounted the attack, however, without appearing weak in the eyes of domestic constituencies and incompetent abroad.

By extension, if organized crime circles in Russia have long had Novichok samples, then it is plausible that Ukraine and other countries could have it, too.  Obtaining an alleged Russian assassination manual would be fully consistent with a third-country deception campaign, reminiscent of the ways Iraqi oppositionists fed false reports to the U.S. in the run up to the Iraq War.  Moreover, numerous Chechens have joined ISIS and fought in Syria, and the U.S. Department of State recently indicated that ISIS has a chemical weapons program overseen by a French national, suggesting that ISIS and other Syrian groups could have produced or procured the nerve agent used against Skripal.

The uncertainty about the perpetrators and motives behind the Skripal attack argues for a more cautious policy response than the West has adopted to this point. If evidence ultimately shows that Putin ordered a chemical weapons attack on British soil, the expulsion of suspected Russian intelligence officers from US and European capitals is hardly commensurate with the scale of the crime or the larger threat posed by Russia.  But resolute condemnations of Putin and Russia will be counter-productive if the case was a false-flag operation or the spillover of a shadowy Russian intelligence or criminal vendetta. Before we march farther down the path toward confrontation with a nuclear superpower, we should take steps to clarify what actually took place.