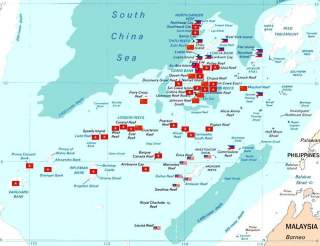 Most of the attention in the South China Sea has focused on China’s military activities. But the impending natural disaster there is also cause for concern. As a recent report makes clear there’s been significant coral loss due to seawater warming. But apart from ocean warming, the Chinese government, through over-fishing and reef destruction, is contributing to the devastation.

The Arbitral Tribunal’s award at The Hague in July 2016, in The Philippines v China, found that Beijing’s construction of artificial islands at seven features in the Spratly Islands violated the UN Convention on the Law of the Sea obligations to protect the marine environment. As James Borton reminds us, the Spratly Islands’ immense biodiversity can’t be overlooked.

Beijing suggests that its island building efforts are a ‘Green Project’. The Chinese government claims its techniques simulate the natural processes of weather as sea storms blow away and move biological scraps which gradually evolve into an oasis on the sea.

John McManus, from the University of Miami’s Rosenstiel School, has highlighted the impact of island expansion on Scarborough Atoll, Pratas Atoll, the Paracel Islands, and the Spratly Islands corals to a point beyond which they will be unable to recover. Damaged coral reefs wont be able to keep up with rising sea levels. Last year McManus concluded that 40 square miles (104 square km) of some of the most biodiverse coral reefs on Earth have been destroyed in the South China Sea thanks to giant-clam poachers.

Combined with China’s building artificial islands around disputed rocks and reefs, it has paved over another 22 square miles of coral. When the two activities are taken together, McManus says, about 10% of the reefs in the vast Spratly archipelago to the south of Hainan, and 8% of those in the Paracel islands, between Hainan and Vietnam, have been destroyed.

The biologist Alan Freidlander, from the University of Hawaii, notes that dredging and building on coral reefs in the South China Sea is causing irreparable damage to one of the most diverse ecosystems on earth. Damage to coral by humans during construction includes compaction or digging, which breaks the coral apart. The coral can also be buried under sand and concrete, from which it can’t recover.

In pursuing its reclamation activities China should look to UNCLOS, to which it’s a party. Article 206 of UNCLOS states:

‘When States have reasonable grounds for believing that planned activities under their jurisdiction or control may cause substantial pollution of or significant and harmful changes to the marine environment, they shall, as far as practicable, assess the potential effects of such activities on the marine environment and shall communicate reports of the results of such assessments in the manner provided in article 205.’

There’s also a requirement under customary international law to undertake an environmental impact assessment—although the exact scope and content isn’t clear—where there’s a risk that the proposed activity may have a significant adverse impact across a boundary.

It’s now time to get greater connection and cooperation between the traditional security and environmental communities on the South China Sea. We need people with a greater understanding of both military and environments affairs. It’s worth noting that the US is now making some useful contributions to improve fisheries management capacity in Southeast Asia. Fisheries management is also being linked with maritime security in the Gulf of Guinea.

There’s also scope to cooperate with environmental groups but to date been there’s been a deafening silence from the environment movement when it comes to condemning coral reef reclamation. Maybe it’s because advocating on this issue might be seen as a bit too boutique compared with clean energy, where such groups want China to reduce its use of coal. Perhaps it’s a concern that cooperation with the US on this issue would open them up to the charge that they’re being used as proxies. Or maybe it’s because there aren’t images of polar bears stranded on melting ice, birds covered in oil, elephants with their tusks removed or turtles caught in fishing nets.

Whatever the reason, the impending natural disaster in the South China Sea should be considered just as disturbing as Chinese military activities. It warrants greater military-environmental coordination. This in turn requires improved dialogue between experts in both fields, even if it does risk China perceiving environmental issues as politicized or even hostile.