The South China Sea Showdown: What Should America (and the Region) Do About It? 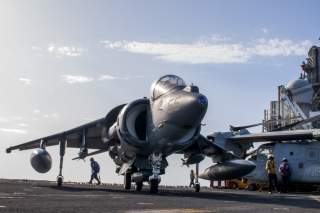 The organizers of this gathering requested a “provocative” presentation. They knew not what they were asking! I will do my best to oblige.

Regional politics underwent a phase change last July, when jurists in The Hague struck down China’s claim to “indisputable sovereignty” over some 80-90 percent of a major waterway. The Permanent Court of Arbitration ruling constituted a diplomatic defeat of epic proportions for China.

Unfortunately, the decision changes little on the ground. Sadly but unsurprisingly, China’s refusal to abide by it shoves the region back into the hardscrabble domain of power politics. If law is not enough, seafaring states must try to deter China through some mix of diplomatic, economic, and military measures. If we work together and keep at it, we just may succeed. China is not all-powerful, nor is it likely to be.

This runs against the usual tale of China’s unstoppable rise to world power, a tale that’s popular in places like Beijing. If China’s rise is fate, and if it’s linear, what point is there in competing against it? But this tale runs counter to the paradoxical logic of strategy, which sees antagonists grapple constantly for strategic advantage. There are ups and downs to strategic competition. No outcome is predestined. This narrative also overlooks demographic, economic, and other challenges that will ultimately weigh on China—constraining its physical might or compelling the leadership to siphon resources from other high priorities to remain militarily strong.

Since there has been a phase shift, it’s time to take stock of the situation anew—keeping ourselves abreast of the times. So let’s spend the next few minutes surveying the strategic terrain and considering some ways to manage it. I make no pretense of saying everything about this very complex situation in a few short minutes.

First of all, we should adjust our attitudes toward regional competition. Sobriety and candor should be the watchwords for seafaring states trying to preserve freedom of the sea—the core principle on which the liberal maritime order, and thus all of our prosperity, ultimately depends. Freedom of the sea, which is far more than freedom of navigation, confronts a serious, determined challenger operating along its own shorelines.

Second, we should recognize that the stakes are high, both for China and for friends of nautical freedom. There’s little if any flex in our stances. Properly understood, freedom of the sea is indivisible. What part of it would we forego for the sake of amity?

For its part, China’s leadership has promised patriotic Chinese, over and over again, and in the most absolute terms, to enforce its claims to sovereignty over islands, reefs, and waterspace, Beijing can hardly back down now. It has painted itself into a corner politically. What part of restoring national dignity and grandeur, or repealing a “century of humiliation,” would Beijing relinquish for the sake of regional concord?

Third, high and nonnegotiable stakes portend a drawn-out strategic competition, full of ups and downs. Carl von Clausewitz, the patron saint of strategic theorists, tells us the “value of the political object” determines how much a protagonist spends on its goals, and for how long. Clausewitz calls this the magnitude and duration of the effort needed to attain those goals. You can think of magnitude as the rate at which a protagonist expends resources—lives, treasure, hardware—on its political aims. Duration is duration.

As our undergraduate physics teachers might say, multiply the rate by the time to get the total price tag of a venture. Maximum value of the object portends an effort of boundless magnitude and duration. If you want it a whole lot, you spend a whole lot for as long as it takes.

The upshot: neither side will yield easily in Southeast Asia. Probably the best we can hope for is a prolonged strategic stalemate in the South China Sea. The sooner we accept this reality, the better we will fare.

Fourth, China could win even if it remains weaker militarily. Fighting on your own ground, against an adversary who’s far from home, confers advantages. It can let the weaker pugilist win, or make the fight so costly that the adversary writes off his goals and goes away.

So do not be taken in by casual, all-too-common comparisons of defense budgets and other quantitative measures of military might. He who spends the most need not win. It is far from clear that a U.S. military detachment—which is what even our Seventh Fleet is—can concentrate superior combat power at the decisive place and time when the decisive place on the map falls within range of so much PLA firepower. The contest would probably be a close-run thing.

As you have probably realized by now, I am not speaking for my navy or government. That being the case, let me offer a few pointers for U.S. policy and strategy in Southeast Asia. What should we do?

- Let’s drop the boilerplate denials that the pivot is about China. It is about China, and the Chinese know it. Refusing to admit the plain truth makes U.S. leaders look diffident, not a good thing when trying to deter opponents or reassure allies. It also fosters strategic and operational drift, as my navy’s hesitant demonstrations on behalf of freedom of the sea have shown.

- Let’s pivot to Asia more swiftly and more robustly than the Obama administration has done to date. Do so, especially in the naval sphere, and we stand a fighting chance of making the Chinese believers in our capability and resolve—and thus of deterring further mischief.

- Let’s reinforce and reconfigure the U.S. Pacific Fleet to fortify deterrence. As we do so, U.S. leaders should relearn the habit and the art of courting risk. To date we have remained mostly passive for fear of China’s wrath. China is our Voldemort! But risk should cut both ways. We must convey to China’s leadership that it runs risks—the risk of unacceptable consequences—when it defies international law and the will of the seafaring world.

- How do we make things risky for Beijing? For one thing, by being bold and deceptive in our operational practices. U.S. Navy flotillas should surge into the South China Sea at places of their choosing, with no advance notice; exercise their prerogatives under the law of the sea; and withdraw just as suddenly. Being unpredictable might give China pause in times of crisis.

- For another, we should amplify the fighting power of our fleet. The navy leadership has launched an initiative dubbed “distributed lethality,” which basically means arming a bigger share of the surface fleet—including nontraditional combatants like amphibious transports, or even combat logistics vessels—with anti-ship missiles or, as it comes online, exotic weaponry like electromagnetic railguns or directed-energy weapons.

- If it floats, it fights is the slogan distributed lethality goes by. Dispersing firepower will both multiply the threat axes along which Chinese defenders must look to fend off attack, and empty their magazines by compelling them to engage a larger number of enemy vessels. That’s the sort of risk we should impose.

- And it could well work. China’s leadership remembers well that the Qing Dynasty lost its Northern Fleet to the Imperial Japanese Navy in 1895. China just commemorated the 120th anniversary of the battle last year. That defeat postponed China’s quest for maritime destiny for a century. No one in China wants to repeat that painful history. Threaten the PLA Navy fleet China has built up, and you broadcast a deterrent signal to which Beijing could prove receptive.

Now a couple of bits of advice for Southeast Asian contenders. The Philippines is hopelessly outmatched in physical might, but it managed to seize the initiative from China through the legal process. Bravo! Manila, and we all, should take our cue from European history, and in particular from Fabius Maximus—Fabius Cunctator, the Delayer—who perfected the art of postponing a decisive battle against Hannibal until more auspicious times. Fabius would applaud Manila’s legal strategy. Look for creative ways to delay China’s strategy, and good things may happen over time.

And Manila, which is under new management after presidential elections, must be a good ally. Clausewitz warns us you never value another’s cause as much as your own. You commit halfheartedly, and look for the exit when the going gets tough. Manila thus should worry about being abandoned. American support is not an entitlement.

If President Rodrigo Duterte expects the United States to defend Philippine territory and offshore waters at high cost and danger to itself, he must stop signaling that he’s prepared to barter away what America is defending—or that he’s prepared to end the U.S.-Philippine alliance altogether. He is driving down the value of the political object of Philippine defense for Washington—and thus, in strategic logic, the amount Washington invests in Philippine defense. The results could prove unfortunate for the islanders. Needlessly alienating your protector constitutes self-defeating diplomacy.

I certainly hope lawyers in Hanoi have consulted with the Philippine legal team and are poised to file a case of their own on the status of the Spratlys and adjoining waters. Moreover, Vietnam has cultivated closer ties with India, Japan, and the United States. It should continue and redouble its coalition-building efforts, offering such incentives as regular access to the seaport at Cam Ranh Bay. Augmenting your strength with that of friends while making the partnership worth their while is common sense.