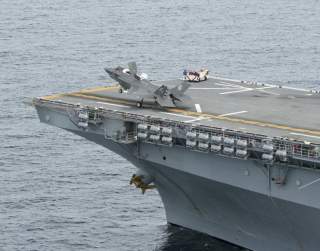 The Navy and Marine Corps are making fast progress with a series of extensive preparations on board amphibious assault ships in order to ensure that their flight decks, sensors and weapons systems can accommodate the first ever deployment of the F-35B Joint Strike Fighter slated for 2018.

The Marine Corps short-take-off-and-landing variant of the Joint Strike Fighter, the F-35B, will be the first ever fifth-generation aircraft in the world to deploy when they serve on board several amphibs in 2018, Marine Corps and Navy leaders told Scout Warrior.

The technological modifications are already complete on the USS Wasp, an operational Navy amphib; they are now underway aboard the USS America and USS Essex while also being built into the USS Tripoli, Navy officials said.

“We have one ship that is fully modified (USS Wasp). LHA 6 (USS America) has received many of the upgrades and is receiving the rest of the upgrades now. USS Essex upgrades are beginning in 2016 and we will phase the other LHD (Navy amphibs) through these modifications in coming years,” Maj. Gen. Christopher Owens, Director of Expeditionary Warfare, told Scout Warrior in an interview.

Navy engineers and shipbuilders are doing extensive work on board the USS America, the lead ship in a series of 11 planned America-class big-deck amphibs. The USS America, or LHA 6, was commissioned by the Navy October of 2014 and has completed a trail period known as “post-shakedown availability” and gone on missions to South America to connect with key allies. The ship is slated for full operational deployment with the F-35B in the future.

The USS America will undergo a series of intense modifications in order to ensure that the weapons and sensors and synchronized with the Joint Strike Fighter and that flight deck can withstand the heat of the F-35B vertical take-offs-and-landings.

The second America-class big-deck amphib, the USS Tripoli (LHA 7), is now being engineered with the needed F-35B modifications built in from the start. The USS Tripoli will deliver to the Navy in 2019.

The LHA 7 (USS Tripoli) design will incorporate a high-tech Navy ship-based computing network called Consolidated Afloat Network and Enterprise Services, or CANES, Leonard said. Overall, the USS Tripoli will be 844-feet long and 106-feet wide and have a weight of more than 44,000 tons. A fuel-efficient gas turbine propulsion system will bring the ship’s speed up to more than 20 knots, a Huntington Ingalls statement said.

Unlike previous amphibious assault ships, the first two America-class big deck amphibs are being built without a well deck in order to optimize the platform for aviation assets such as the MV-22 Osprey and F-35B.  The ship is configured with more deck and hangar space for aircraft and is designed to maximize the technological advantages provided by the F-35B and Osprey

F-35B Will Change Tactics and Procedures on Amphibs