The Story of How Britain Got Nuclear Weapons 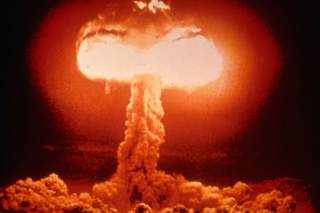 On July 4, 1945, a select group of men met in a room in Washington, DC to decide how to use the first atomic bomb. Not all of them were Americans because the Bomb was not an American invention; use of the new weapon required approval from Britain, its co-inventor. For instance, the 1943 Quebec Agreement forged by United States President Franklin Roosevelt and British Prime Minister Winston Churchill specified joint development and control of atomic weapons.

The British Empire was the first nation to investigate nuclear explosives seriously. By 1941, the Brits had calculated the critical mass of fissionable material required for a bomb, worked out the basics of bomb design and the gaseous diffusion enrichment of uranium. All this information came to the United States with the "British Mission"—the team of top-flight British scientists who joined the Manhattan Project.

But America is not always a reliable ally, and British generosity wasn't reciprocated. General Leslie Groves, the tough, beefy chief of the bomb project, early on felt the weapon should be an exclusively American one and took steps to limit British access. As a result, America didn't share the method for extracting plutonium from uranium, nor did it reveal the existence of the massive Oak Ridge gaseous diffusion plant in Tennessee.

Nevertheless, it was a huge shock when Foreign Secretary Ernest Bevin rudely learned his country's closest ally had no intention of sharing the Bomb. A shaken Bevin told Prime Minister Clement Atlee, "no Foreign Secretary should ever again be put in such a position," and Atlee agreed.

Though Churchill with his usual wit once dismissed Atlee as a modest man "who had much to be modest about," the Labor PM saw what many leaders have seen since—the only way to get taken really seriously as a major power was to possess the ultimate weapon. Despite Britain's exhaustion and near bankruptcy, she had to do whatever it took to arm herself with the atom. And she had to do it without any help from her friend.

Ironically Britain resorted to the tactics of its new foe, the Soviet Union. Klaus Fuchs, a smart, quiet, traitorous physicist who supplied Soviet agents with their most valuable materials on the U.S. effort, also aided his adopted country's weapons project. But the key figure in Britain's Bomb project, William Penney, had a more traditional sense of patriotism.

Penney excelled in hydrodynamics and designed floating breakwaters for the Normandy invasion. His abilities lifted him to the top of the Manhattan Project where he joined Robert Oppenheimer, John von Neumann and others making crucial decisions. Penney personally witnessed the Nagasaki attack, watching from an observation plane as the implosion system he helped create vaporized an entire city in one flash.

Penney became the "British Oppenheimer" on January 1, 1946, and later that year represented Britain during Operation Crossroads, the first American postwar nuclear tests. Though not formally asked to build a British bomb until May 1947 Penney had realized the job would likely fall to him. Shortly after his official appointment, he wrote out a general technical description of the Fat Man plutonium bomb from memory—a feat which gave the UK information equivalent to that which Soviet agents had stolen from America.

Britain faced the same pressures as the Soviet Union to get nuclear weapons as fast as possible. Wartime urgency drove the U.S. effort, but now need for "face" drove the British effort. America got the Bomb through its enormous resources, but Britain would have to duplicate that feat on a shoestring. These pressures—diplomatic and financial—would lead the UK to take dangerous shortcuts with frightening results.

To create the plutonium bomb fuel plant, production director Christopher Hinton chose a site on the northwest coast named Sellafield. Windscale, as the plutonium facility was known, became the largest construction project in the UK during the early postwar years. Hinton rejected the water-cooled reactor design used at the U.S. plant in Hanford, Washington, and instead chose air cooling. If the water cooling failed, thought Hinton, the reactor would overheat and catch fire.

After seven years of backbreaking effort, the first British nuclear device shipped out for Australia in September 1952. By then the Cold War had turned hot in Korea where British troops fought communist forces. The naval task force—the escort carrier HMS Campania, the target destroyer HMS Plym and some landing craft—left Portsmouth carrying the most expensive object ever produced in the Empire. The expedition's five ships and 1500 men seemed minuscule compared to the thousands of ships and men employed on the Crossroads tests.

The task force arrived at the Monte Bello Islands off Australia's northwest coast. On October 3, 1952, after the plutonium core was carefully lowered into the device aboard the Plym, all connections made, and the crews evacuated to a safe distance aboard the Campania.

The bomb Hurricane exploded with a force of 22 kilotons, vaporizing the Plym and announcing Britain's entry into the nuclear club. Weather conditions inhibited the formation of a classic mushroom cloud, and some sailors were unimpressed. But His Majesty's Government was impressed enough to confer a knighthood upon now Sir William Penney. Winston Churchill, once again returned to No. 10 Downing Street, was surprised and delighted to learn of the British Bomb.

But just three weeks later on November 1, 1952, the Americans upped the ante for remaining at the nuclear table with the detonation of the world's first thermonuclear bomb, a device thousands of times more powerful than the Fat Man. A mere fission weapon was now no longer enough for respect—only an H-bomb would do.

A second test series in 1953, Operation Totem, gave British weaponeers more experience and data. Hurricane had been so rushed that little instrumentation had been deployed; the small Totem blasts (less than ten kilotons) were exploded in the south Australian desert. The following year British scientists were allowed to witness and sample the American H-bomb tests of Operation Castle. A few months later on June 16, 1954, Winston Churchill decided that Britain would have its own H-bomb.

Again the island nation faced a looming deadline. Atmospheric nuclear testing worried the general public and pressure grew for a moratorium. By the end of 1955, it looked like the UK would have only a short time to develop and demonstrate a thermonuclear capability. Although Britain was emerging from wartime privation, money and resources were still tight. Again pressure mounted on the nuclear weapons establishment to deliver in a short time.

Technicians at Windscale, who had worked out ways to increase plutonium production, now tinkered with the reactors to produce tritium, a very heavy radioactive form of hydrogen. Periodically they had to stop production and allow the reactors to heat up and release stored energy, a problem first identified in the American reactors.

Four years after its first nuclear test Britain again returned to its former colony with bombs and men. In June 1956, Operation Mosaic proved the "boosted-fission" technique—adding a little hydrogen compound (lithium deuteride and tritium gas) to an atomic bomb boosted its yield considerably when hydrogen nuclei fused together in the heat of a nuclear blast.

So considerably, in fact, that Mosaic 2 caused a deep rift between Britain and Australia that required decades to resolve. The test yielded sixty kilotons and dropped fallout across northern Australia all the way to Brisbane. British Prime Minister Anthony Eden personally assured Australian Prime Minister Robert Menzies that the shot would not exceed earlier tests by a specific measure—the Australian Government was not told of the test's true yield until 1984. The pursuit of nuclear weapons does not make for straight talk or action.

Later that year Operation Buffalo tested fully-weaponized devices at Maralinga, Australia. Buffalo's shots included a cratering test and an airdrop and, despite reducing the fissile cores to minimize fallout, the enormous quantities of radioactive dirt thrown up by the tests again contaminated the Outback. A later test at the same site in 1957, Antler 1, used embedded cobalt pellets as diagnostic elements; these gave rise to a rumor the British were developing radiological weapons.

Operation Grapple involved several test series during 1957 and 1958. Not even Australia was big enough for megaton-class shots, so testing moved out into the Pacific to Malden Island, an uninhabited speck of land in the middle of the Pacific. In the first round in 1957 three devices were tested: Green Granite, Orange Herald and Purple Granite. All three were thermonuclear bombs, though Orange Herald was a huge boosted fission weapon.

Indeed, Orange Herald remains the largest boosted fission device ever tested at over 750 kilotons yield. Green Granite and Purple Granite disappointed the weaponeers; their two-stage designs yielded only a few hundred kilotons rather than the megaton expected.

With the third Grapple shot, X, the UK finally demonstrated a true two-stage radiation-implosion multimegaton bomb. The Green Granite design was hurriedly modified, a device built and sent to the Pacific where minimally-trained RAF crews loaded it onto a Valiant bomber and sent it aloft. X marked the spot with a huge mushroom cloud and 1.8 megatons yield. Britain had again joined the "top table" among nations.