The Story of the 21st Century: China's Challenge to Pax Americana 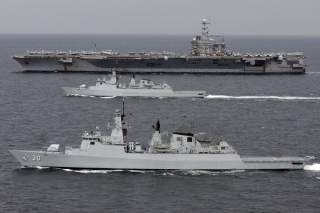 The United States has sought to maintain its strategic and economic supremacy in the Asia-Pacific, but traditional diplomatic tools and displays of military strength are having less of a deterrent effect on China's expansion in the region. China is accelerating its challenge to Pax Americana, the post-World War II international order shaped by the United States, and is pushing the boundaries of its security presence in the region by contesting the sovereignty of several ASEAN member states through territorial claims and provocative behavior. China is also reshaping the economic architecture of the Asia-Pacific to bolster Chinese influence through creation of new financial mechanisms such as the Silk Road Fund and the Asia Infrastructure Investment Bank (AIIB). China is no longer taking a back seat to Pax Americana, and the United States should seize opportunities that maintain its influence in the Asia-Pacific.

US security interests in the South China Sea are challenged by Chinese encroachment. The sovereignty of several ASEAN states, including Vietnam and the Philippines, has been threatened by China's illegal fishing and energy exploration in their exclusive economic zones, and the broader maritime region has been destabilized by China's "nine-dash line" claim to nearly the entire South China Sea. The most recent threat comes from land reclamation efforts in the Spratly Islands, where, in the last year alone, China has built six islands where none previously existed to expand military power-projection capabilities and to support, with military assets, its fishing fleet and oil and natural-gas exploration.

The United States finds itself diplomatically conflicted when the sovereignty of an ASEAN state is threatened by China. The targeted country should stand up for itself, but it may not have the capacity or political will to act. However, if it does respond and is overly aggressive in doing so, it may elevate tensions to a point where US intervention may be required. The military and diplomatic costs of a US maritime intervention must be calibrated against the cost of an unanswered provocation that may embolden China and damage regional perceptions of US leadership. The United States has supported ASEAN's issuance of unified statements aimed at China that express "serious concerns over on-going developments in the South China Sea," but these statements have done little to alter Chinese actions thus far, and further thought by US policy makers is needed.

China's aggressive actions have led ASEAN countries to seek protection by strengthening military ties with one another and with regional powers such as the United States and Japan. The Philippines and Vietnam have committed to strengthening military training and handling of maritime violations in the face of disputes with China in the South China Sea. The Philippines reengaged the US militarily by signing the Enhanced Defense Cooperation Agreement. Vietnam struck a deal with Japan to receive six patrol boats in the wake of China's deployment of an oil rig in the Paracel Islands, which are also claimed by Vietnam. Just last month. Indonesia and Japan agreed to establish a Maritime Forum under which Japan will bolster Indonesia's maritime safety capacity through efforts including financial assistance and port infrastructure development. This flurry of bilateral engagement reflects a shared concern among Pacific nations over the threat China poses to maritime security and a newfound willingness to work together to maintain peace and stability in the region.

The territorial disputes that encourage bilateral ties among some ASEAN nations can also be a source of division within ASEAN institutions, particularly for nations without claims in the South China Sea. The ASEAN Regional Forum and East Asia Summit are important multilateral venues for discussing security and political issues in Asia but are criticized for their lack of action. The United States has long grappled with how best to leverage ASEAN institutions to further its security goals, but there may be a new opportunity to capitalize on a joint maritime peacekeeping force proposed by the newly appointed ASEAN Chair. The force would unite ASEAN nations to address territorial disputes and could offer advantages over existing fora by more narrowly focusing on the maritime domain and by being operational and not merely aspirational. The commander of the US 7th Fleet has already pledged support should ASEAN organize and lead such an effort.

China recognizes that its provocations can be counterproductive and has balanced its approach and increased the attractiveness of its security concepts to ASEAN nations by packaging them with funds from the newly launched AIIB. The bank is China's attempt to change the way regional infrastructure is financed, and it challenges Western-influenced international financial institutions such as the Asian Development Bank (ADB) and the World Bank. The AIIB's initial capital base of $100 billion is two-thirds as large as the ADB's, and its membership already includes 10 ASEAN members as well as the United Kingdom, France, Germany, and Italy. The United States and Japan are absent. China has also announced a $40 billion endowment for regional infrastructure development called the Silk Road Fund that competes with the US-backed Millennium Challenge Corporation, which is financed at much lower levels (President Obama's FY16 budget request included $1.25 billion for the corporation). By influencing the financial and development infrastructure in the Asia-Pacific, China can maintain leverage over ASEAN states in need of such resources, even as its maritime provocations continue.

China seeks to dominate long-term strategic and economic trends in the Asia-Pacific, but the United States can challenge this and maintain a strong presence in the region with a strategy that clearly articulates the national interests it is willing to fight for and the consequences of violating those interests. Peace and stability, respect for international law, freedom of navigation, and unimpeded lawful commerce are the US national interests in the South China Sea. China has undermined some, if not all, of these core interests, yet the US response has been muted for fear of getting pulled into skirmishes between China and its neighbors. The United States has often stated that it takes no position on "competing territorial claims over land features ... in the South China Sea," but in the long term interests of the United States, it may be prudent to strengthen support and defense of its Asia-Pacific allies that do take a position.

A more assertive strategy to defend America's allies and partners in the Asia-Pacific can be executed with manageable consequences. China and Japan both claim the Senkaku Islands in the East China Sea, and President Obama recommitted to Japan's security a year ago by stating that Article 5 of the US-Japanese treaty of alliance "covers all territories under Japan's administration, including the Senkaku Islands." The meaning was clear: the United States will defend Japan, and although China rejected the statement there was no immediate repercussion beyond that criticism. There may be long-term repercussions, as China may use President Obama's commitment to Japan, and potentially to other allies in the region, to legitimize its military expansion and land reclamation efforts, but China's territorial appetite predates the president's recent comments-China's claims will continue until its national interests are no longer served, either because of consequences imposed by the US and China's neighbors, or because China achieves its goals.

Administration officials believe that a US presence provides stability and contributes to a security environment that avoids escalation and conflict in the South China Sea, but China's provocations have escalated unchallenged and without consequence, suggesting that modified US action is needed. Perhaps new security treaties with US partners in the region will deter China and help protect their sovereignty. The defense cooperation agreement signed by the United States and the Philippines last year allows US military assets to rotate through Filipino facilities to respond to natural disasters and to other unspecified emergencies, and taking this relationship a step further might be worth exploring. Vietnam's relations with the United States have warmed in recent years due in large part to China's provocations, and while deeper cooperation will take time, the United States should exploit this moment to strengthen ties with Vietnam and other partners in the region.

This type of alliance-building appears reminiscent of the Cold War era that pitted the United States and the Soviet Union against one another. There is little appetite for a return to this bipolarity, but China is no longer rising peacefully or complacently. The United States must recognize the new Asia-Pacific reality, defend its national interests, and protect the sovereignty of its allies and partners in the region. Otherwise, a Sino-centric system may replace Pax Americana and what it represents.

Eric Weiner ([email protected]) is an Analyst with Banyan Analytics. This article was originally posted on the website of Banyan Analytics and CSIS PACNET Newsletter here.