The Strategic Logic of the Islamic State 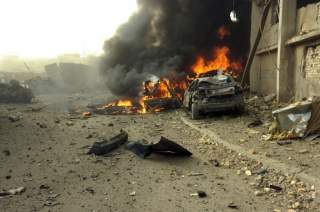 The so-called Islamic State (ISIS) continues to pose a serious challenge not just to the Middle East, but to the entire world. While the efforts of a US-led coalition have weakened ISIS, destroying the group has proved difficult—and it has continued to inspire attacks in faraway places, from Brussels to Bangladesh.

To understand how to defeat ISIS once and for all, we first need to comprehend its strategy. And make no mistake: even if the ISIS-associated international attacks seem random, the group’s global crusade does have a strategic logic.

ISIS is fighting for its survival. It has neither the money nor the manpower to fight anything like a traditional war against the US-led coalition and its local allies—at least not for long. What it does have is a message that resonates with certain groups—typically marginalized, disenchanted, and tormented young men—within a broad range of countries, in the Middle East, Europe, and elsewhere. And it has become very good at tapping these sources of manpower.

The group’s spokespeople have repeatedly called on followers and supporters worldwide to strike its enemies, particularly in the West. Inspiring lone wolves and stay-at-home groupies or tight-knit local cells to launch attacks in distant, unpredictable locations is the ultimate weapon of the weak in asymmetric conflicts. It enables ISIS to reap all of the benefits of an attack, while incurring none of the costs.

The benefits are substantial. Such attacks divert attention from ISIS’s losses in Syria and Iraq, and can even make it seem that the group is getting stronger. This not only enhances ISIS’s capacity to recruit and inspire more terrorists; it also penetrates the thinking of citizens in coalition countries. ISIS hopes that, as the human and economic costs of the fight against ISIS accumulate in those countries, particularly in Europe, public opinion may turn against military involvement in Iraq and Syria.

As pressure on ISIS builds—particularly in Mosul, Iraq’s second-largest city, and Raqqa, the Syrian city that has become the self-proclaimed caliphate’s de facto capital—its calls for attacks will intensify. Given a widespread willingness—from San Bernardino to Nice—to heed those calls, the results could be devastating.

Of course, ISIS does not rely entirely on inspiration. It also recruits skilled combatants from just about anywhere—including Tunisia, Morocco, Libya, Jordan, Turkey, France, Belgium, and Britain—whom it then sends to launch spectacular operations, such as those in Istanbul, Brussels, and Paris. There are credible reports that ISIS has even established an external branch responsible for plotting terrorist operations abroad.

If Mosul and Raqqa fall in the coming year, as seems likely, thousands of surviving ISIS combatants will return to their home countries, where they are likely to continue waging their war with terror attacks. As a result, the coming year is bound to be at least as bloody as the last one.

Who will bear the brunt of ISIS’s desperation? The US tops the list of ISIS’s enemies. But dispatching fighters there from the Middle East poses a logistical challenge. And there are only about 100 Americans fighting with ISIS, meaning that, in the US, inspiration is ISIS’s main tactic.

European and Muslim countries are much more convenient targets, and not only in geographic terms. Most ISIS fighters are from the Arab world, and 4,000 European men and women have joined the group.

Of the European countries, France, which has assumed a leadership role in the fight against ISIS, is the most vulnerable. It has already suffered more casualties than all of its neighbors together, with 235 people killed in the last 18 months.

One reason for this is that the sense of exclusion and alienation felt by a large segment of France’s Muslim community has made it easier for ISIS to recruit in the country. Some 1,200 French nationals have joined as fighters—the largest contingent of Westerners in the group. Add to that serious gaps in France’s domestic security arrangements, and the odds of further attacks appear high.

But as much as ISIS wants to hurt the West, the countries of the Middle East—especially the Shia regimes of Iraq and Syria, plus their Iranian ally—remain its prime target. After all, ISIS’s effort to build a caliphate requires it to control territory. The struggle against America, Europe, and even Israel must be deferred until a Sunni Islamic state is built in the heart of Arabia.

Given this, it is crucial that the security threat posed by terror attacks does not overshadow, particularly for Western leaders, the imperative of dismantling ISIS’s pseudo-state in Iraq and Syria. But even when that task is finished, ISIS will still wield its ideology as a weapon to attract fighters to engage in guerrilla warfare in Iraq and Syria, and in terrorism abroad.

That is why it is also necessary to cut off the social and ideological oxygen that has nourished ISIS’s spectacular rise. This means addressing the Middle East’s broken politics, including both its causes (such as the geostrategic rivalry between Sunni-ruled Saudi Arabia and Shia-led Iran) and its symptoms (including the civil wars spreading through the Arabian heartland). Only then can the Arab-Islamic world and the international community defeat ISIS and others like them.