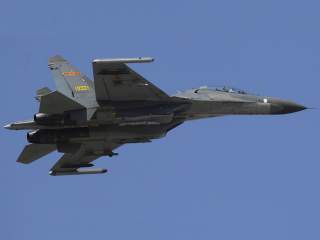 China's recent deployments on Woody Island carry a larger strategic significance. Aside from being unmistakable signs of militarization, Beijing's actions highlight both the effectiveness of its strategic expansion into the South China Sea, and the dilemma Washington and others face in crafting a response.

Reports last week that China has sent J-11 fighter jets to Woody Island came less than ten days after satellite images revealed two batteries of HQ-9 surface-to-air missiles had been deployed to the disputed island. While provocative, neither deployment is entirely unprecedented. Rather, they represent the latest in a series of incremental steps that Beijing has taken to bolster its strategic foothold in the Paracel Islands.

Less than two weeks after America's second FONOP—this time in the Paracel archipelago, about 120km from Woody Island—Beijing reinforced its presence by deploying the HQ-9s, which can strike incoming missiles and aircraft up to 200km away. While this was the third time HQ-9s had been placed on the island, it was their first operational deployment outside of military exercises. Now the J-11s are back, marking what is probably the first time ever that fighter jets and missiles have been simultaneously deployed.

As many have pointed out, these actions show how China is methodically building an anti-access zone to deter the United States and others from operating military forces around the Paracel Islands. They also reveal three broader aspects of China's effective strategic expansion into the South China Sea.

First, Beijing is using American FONOPs as a justification to carry out specific acts of tactical militarization, even as it expands its strategic presence independent of U.S. actions. It's by no means a coincidence that the last two FONOPs were quickly followed by an increase in China's military footprint on Woody Island. This shows Chinese officials have been serious when warning that U.S. naval intrusions might lead Beijing to “strengthen and hasten the build up of relevant capabilities” for island self-defense. However, this tit-for-tat dynamic is only part of the story.

China was building airstrips and other military facilities long before the White House agreed to launch FONOPs. Moreover, the timing of Chinese missile and fighter deployments has not always coincided with perceived American provocations. Beijing's motives, in other words, run deeper than reaction, and have mainly been about ongoing expansion. Of course, at a more fundamental strategic level an action-reaction cycle is becoming entrenched between the United States and China in which elements of the security dilemma loom ever larger. Yet, as far as operational dynamics in the South China Sea are concerned, Beijing is both undeterred by American FONOPs and willing to exploit them as opportunities to step up military deployments.

Second, the highly calibrated way that China is enhancing its strategic and military presence on Woody Island makes it difficult for others to effectively respond. This, to a degree, is Beijing's “salami-slicing” in action. Were China to have deployed military assets in a bolder, faster or more forceful manner, it's possible that Washington and other maritime players would have responded with greater resolve. More importantly, had China reacted to American FONOPs with intimidating aerial and naval intercepts, like those which triggered dangerous incidents in 2013 and 2014, the region would have been far more alarmed—and the risk of miscalculation and conflict significantly increased.

By contrast, deploying small numbers of fighters and missile batteries will not automatically lead to a security crisis. Like the construction of artificial islands, these capabilities gradually advance China's strategic presence at relatively low levels of friction or risk. This makes it particularly tricky to prevent Beijing from militarizing Woody Island, or indeed any of the features it currently controls. Short of physically blocking Chinese efforts to deploy force—which would undoubtedly trigger a major clash—concerned nations must rely on indirect and, to date, largely unsuccessful measures to impose diplomatic, economic or reputational costs.

Finally, the ease with which Beijing is transforming Woody Island into an anti-access hub suggests that China might roll out similar facilities in the Spratly Islands. China has already completed an airstrip on Fiery Cross, and is building two more on Subi and Mischief Reefs, meaning it will soon be able to land military aircraft right across the South China Sea. In fact, J-11 deployments may be expected later this year, perhaps in the wake of a future FONOP. Aircraft shelters and more sophisticated radars—like the high-frequency radar spotted on Cuarteron Reef last month—are also likely to make an appearance, while warships will be able to dock at numerous ports.

Following the Woody Island blueprint, China could deploy surface-to-air missiles in the Spratly Islands at relatively short notice, without constructing dedicated launch sites. Although these, as Sam Roggeveen noted, would need to be protected from corrosion and possibly maintained elsewhere, they would nonetheless provide an effective short-term way to fortify China's controversial artificial islands. Together, the combination of advanced radars, fighters, missile defenses and warships would significantly raise the costs and risks to American ships and aircraft challenging Beijing's South China Sea claims.

China's military deployments on Woody Island are the tip of the iceberg in a much larger and enduring strategic challenge. Although individual capabilities won't tilt the regional balance, the combination of multiple power projection and anti-access platforms on the island will advance Beijing's quietly expanding presence in the Paracel Islands. As a new CSIS map makes depressingly clear, replication of the Woody Island model in the Spratly archipelago would allow Beijing to essentially block out large swathes of the South China Sea. While FONOPs send a defiant message that Washington will not accept any excessive maritime claims, these ephemeral acts pale in comparison with the lasting strategic gains of China's creeping expansion.

Ashley Townshend is a Research Fellow at the United States Studies Centre at the University of Sydney, and a Visiting Fellow at the Center for Asia-Pacific Cooperation and Governance at Fudan University, Shanghai. He works on international security and strategic affairs with a focus on China, Northeast Asia and the Indo-Pacific region, including maritime disputes in the East and South China Seas. This article first appeared in the Interpreter.