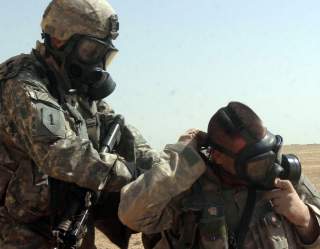 On Thursday evening the U.S. Navy destroyers Ross and Porter launched fifty-nine Tomahawk cruise missiles at the Shayrat Air Base in Syria. In addition to striking a munitions store suspected to be holding air-dropped chemical weapons used in an attack on Khan Sheikhoun on April 4, the principal target was undoubtedly what Washington believes was the chemical weapons delivery system: the Sukhoi Su-22 fighter bombers stationed at the airbase.

The Su-17/20/22 family of fighter bombers attained the name recognition of more glamorous Soviet-era aircraft like the MiG-25 or Sukhoi Su-27. This obscurity is unmerited: the swing-wing attack jets have seen intense use in combat in an astonishing variety of conflicts, and more than a dozen even continue to serve on in NATO as part of the Polish Air Force. The type has suffered such heavy combat losses they could be considered the Sean Bean of combat jets.

The Soviet Su-17 was designed to be a swing-wing evolution of the Su-7 fighter-bomber, which saw a lot of action in the Arab-Israeli conflicts and the 1971 Indo-Pakistani conflict. Though relatively fast and durable, the swept-wing Su-7 could only carry a four-thousand-pound bomb load, had a limited combat range, required fairly long runways for a ground attack plane, and boasted only mediocre low-altitude flight performance. These were all serious shortcomings for a ground-attack plane.

Sukhoi’s solution to the problem of low-altitude flight performance was to give its new design swing wings, a feature first pioneered by the U.S. F-111 light bomber. The Su-17 could extend its wings outwards up to sixty-two degrees for superior lift and maneuvering, or retract them inwards for maximum speed and fuel economy. Powered by a Lyulka AL-21F-3 turbojet, the Su-22 could travels at supersonic speeds even at low altitude, and attain up to Mach 1.7 at high altitude with the wings tucked back.

The longer and heavier fighter-bomber was armed with the same two Nudelman thirty-millimeter cannons as the Su-7, but could carry twice the bomb load on its ten hardpoints, and additionally mount up to two short-range heat-seeking air-to-air missiles for self-defense. It was also gradually adapted to launch various precision-guided weapons phased into Soviet service, though a more typical armament consisted of unguided gravity bombs and underwing rocket launching pods.

The Su-17 entered service with the Soviet VVS Air Force in 1970, the first of several Soviet swing-fighter fighters. Codenamed the “Fitter” by NATO and the Strizh (Martlet) by its crews, Soviet Su-17 saw heavy combat use in Afghanistan, where they struggled to cope with the climate and were generally outshined by the slower and tougher Su-25 Frogfoot. They also participated in the aerial bombardment of the first Chechen War before being phased out of Russian service in 1998.

Sukhoi actually developed two separate variants of the single seat Su-17M and two-seat Su-17UM, designed the Su-20 and Su-22 respectively. Hundreds of these entered service in Warsaw Pact air forces and Soviet successor states, as well as countries in the Middle East, Africa and even Peru—where they were involved in countless regional wars.

Twenty-eight Su-20s served in the Cold War flashpoint of Angola—delivered in several batches after ten of the first twelve crashed or were destroyed—launching ground attacks against Angolan rebels despite heavy losses due to ground fire and accidents. Iraq lost dozens of Su-20s and -22s in the Iran-Iraq War—to Iranian fighters or ground fire, depending on who you ask—and two more to U.S. Air Force F-15s in 1991 while attempting to flee to Iran. Iran kept the Iraqi Su-22s, and appears to have transferred some to Syria recently.

Israeli F-4 Phantoms and F-15s shot down more than a dozen Su-20s and -22s in the 1973 Yom Kippur War and 1982 conflict in Lebanon, respectively. Meanwhile, two Libyan Su-22s notoriously shot at U.S. Navy F-14s over the Gulf of Sidra in 1982, and were splashed for their troubles. The aircraft were later used by Qaddafi to bomb rebels in in Benghazi in 2011, during which one of them fell victim to a Belgian Air Force F-16. Now those same rebels are trying to put retired Su-20s back into service for use in the ongoing Libyan Civil War.

Even the Peruvian jets saw combat, shooting up a U.S. Air Force C-130 during a counter-drug flight and losing two of their number during the 1995 Cenepa War, allegedly shot down by Ecuadorean Mirage F1s.

While fourth-generation F-16 and MiG-29 fighters are the mainstay of the Polish Air Force today, the NATO member still intends to keep sixteen to eighteen Su-20s and -22s in service for another decade. The aging beasts are simply so versatile, reliable and inexpensive to operate that the Polish Air Force is better served with holding on to them while it seeks funds to modernize and expand its ranks. And yes, one of the Polish Fitters was even shot down by an errant friendly SA-6 surface-to-air missile in 2003—despite never being used in combat!

Today, the Su-22 serves as the workhorse of the Syrian Air Force in its relentless aerial bombing campaign in Syria, which as much aims to make life in rebel-held areas intolerable for the civilian population by hitting hospitals and bakeries, as to destroy rebel fighting positions. Cluster bombs, thermobaric weapons, and S-8 and S-24 unguided rockets are commonly used in these attacks. Around fifty-three Su-22 two-seaters served in the Syrian Air Force at the start of the conflict, four of which have been lost, including at least one shot down by enemy fire. Around thirty aircraft are still operating in three squadrons, flying an estimated twenty-five combat sorties a day.

The April 4 chemical attack on the rebel-held town of Khan Sheikhoun coincided with an airstrike by Syrian Air Force Su-22s—a flight that was observed by witnesses on the ground and tracked by U.S. radars. Chemical-arms experts claim that the deadly dispersal of sarin nerve gas, which subsequently killed more than eighty residents of the town, could only have resulted from air-dropped chemical weapons, rather than the destruction of a rebel stockpile of chemical arms as is claimed by the Russian and Syrian government.

The U.S. missile strike on April 4 was intended to hit the Su-22 squadron at Al Shayrat, which also hosts Syrian MiG-23 fighters and Russian attack helicopters. However, it’s not yet clear if the Sukhois were hit: Washington informed Moscow in advance of the attack to avoid killing Russian personnel, which may have given the Syrian Air Force time to move its valuable jets. Initial reports from the Russian Ministry of Defense claim the strike killed six Syrians and destroyed six Syrian MiG-23s in their hangers but failed to hit the runway or any of the parked Su-22s. If the claim is true, the old attack plane may finally have dodged a bullet.