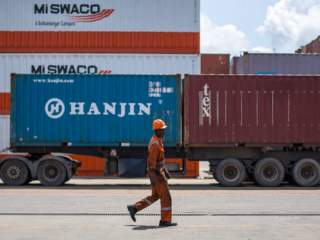 We ought to know the story by now. Why did the United States, for so long reluctant to project political and military power beyond the New World, come to underwrite world order as a matter of course? Yet in A Sense of Power, John A. Thompson reveals how poorly we answer this question. He writes in the judicious timbre of a distinguished historian, but Thompson, an emeritus reader at the University of Cambridge, takes a scythe to half a century of theories and refutations. In the process, he delivers a penetrating narrative of U.S. foreign policy from McKinley to Eisenhower, illuminating how many reasons Americans perceived not to lead the world.

What overcame this reluctance, most scholars say, were the imperatives of America’s own security. But as Thompson points out, the scholars making this case, like the presidents they study, pack a multitude of motives into the concept of security. Smuggling in the American “way of life,” among other nebulae, they raise several questions For Thompson, the only cut-and-dried meaning of security would be the safety of North America from invasion. At every turn, however, he shows just how improbable such an attack seemed to observers at the time—and actually was. Even in the darkest years, when the Axis rampaged Europe and Asia, the Wehrmacht came nowhere close. It turned out that Napoleon’s men, able to live off the land, could conquer across oceans more easily than Hitler’s, tethered to an umbilical cord of fuel and materiel.

At the same time, Thompson refuses to side with historians who criticize the United States for aggrandizing its power in pursuit of economic gain. He deploys a battery of evidence against the proposition, pioneered by William Appleman Williams, that American capitalism necessitated political and military globalism. In the early twentieth century, the United States built the world’s largest economy within its own shores, deriving a pittance of trade, investment, and raw materials from overseas. By the 1950s and 1960s, exports made up 4 to 5 percent of gross national product. Military spending was higher. If anything, Thompson thinks economic concerns might have held America back from the world stage. Businessmen showed more interest in developing the home market than in funding a big government to police markets abroad.

If the United States remained exceptionally self-sufficient, strategically and economically, why did it suddenly acquire the “will to exercise power,” in Thompson’s phrase? Why shoulder the certain burdens of world leadership when neither safety nor prosperity required it? In response, Thompson flips the script. He argues that far from feeling imperiled, American policymakers realized their nation towered so tall over others—bringing order that served civilization—it possessed something of a duty to do so. “The peace of world cannot be established without America,” Woodrow Wilson declared in 1919. It’s the Superman principle, only less heroic: a sense of power imbued policymakers with a sense of responsibility, worth discharging if costs were slight.

Thompson sees this logic unfolding gradually, leading U.S. commitments abroad to expand cautiously. First, American leaders asserted superiority only in the Western Hemisphere, where the European powers would not fight. They waited to embrace globalism until after World War II, when America’s economy was as large as the rest of the world’s. But the hinge and highlight of Thompson’s account takes place before and during the Second World War. In his telling, interventionists reprised Wilson’s line that any major conflict in the shrinking modern world would inevitably embroil the United States. On the merits, they were wrong: the United States might well have stayed out through a dedicated policy of neutrality, Thompson implies. Pearl Harbor, however, seemed to prove interventionists right. Erstwhile critics now bowed to prophet Wilson. “The clinching argument,” Thompson writes, became “that ‘twice within a generation’ the United States had been dragged into a major foreign war.” With this, the argument for world leadership fulfilled itself.

Stressing the advantages of North America, rather than searching for vulnerabilities, Thompson poses the problem more convincingly than historians before him. His solution, though, seems incomplete. A “sense of power” can’t alone explain why policy elites acquired a sense of international responsibility. Recognizing this, Thompson hints that a “somewhat intangible” sympathy for European and Anglophone civilization motivated East Coast elites; their cultural affinity underlay, indeed predated, their calculations of national interest. Even if so, Thompson can account for the desire to join world politics but not to lead it.

By conflating international participation and international preeminence, Thompson assumes the American policymaking class aspired to both objectives from the outset of the twentieth century. He takes this aspiration for granted, focusing instead on its diffusion through the political system. It’s as though the will to lead the world was latent all along, awaiting propitious events to put it across. As a result, Thompson sacrifices his own ambition to ask why influential Americans decided to lead the world in the first place. Like the scholars he criticizes, he ends up wondering what took so long for Congress and the public to summon the will demanded by elites.

But in fact few elites, up to 1940, imagined the United States could or should emerge anytime soon as the world’s preeminent power, permanently projecting its military across the globe. The world already had a leader in Great Britain. Some American policymakers liked it that way, delighted to let London bear the brunt. Many doubted the need for any armed world orderer. Even Wilson deemed his League of Nations to be a “disentangling alliance” ready to transcend power politics. For subsequent advocates of global supremacy, Wilson was a false prophet. So indeed was his generation, which called itself “internationalist” because it believed peaceful intercourse could supplant the reign of force.

In order for the United States to choose world leadership, basic values had to change. Americans had to accept military force as essential to world order, and the willingness to use it as the definition of enlightened “internationalism” rather than European-style imperialism. Thompson only begins the inquiry into this transformation, but no matter. By making America’s will to lead the world seem unlikely and strange, he opens up a whole vista on America’s place in the world.

Stephen Wertheim is a postdoctoral fellow at Princeton University and the University of Cambridge.