The Syrian Air Force: What Is Left? 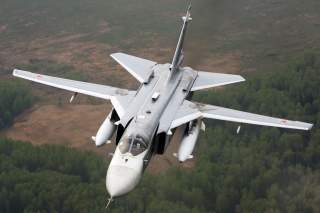 Just how much remains of the Syrian Arab Air Force? The Pentagon is claiming that the U.S. Navy’s Tomahawk cruise missile strike on April 7 destroyed some 20 percent of the Assad regime’s remaining operational aircraft.

The U.S. Navy launched some 61 Tomahawk cruise missiles at the Syrian airbase at al-Shayrat in response to an Assad regime Sukhoi Su-22 Fitter strike aircraft dropping chemical weapons—thought to be Sarin—on civilians on April 4. One of the cruise missiles failed to launch while another crashed into the sea—which means a total of 59 Tomahawks hit their targets according to the Pentagon.

The Pentagon claims that the strike—which right now seems to be a one-time punitive raid—caused significant damage to the Syrian airbase and to what remains of Bashar al-Assad’s air force. “Department’s assessment is that the strike resulted in the damage or destruction of fuel and ammunition sites, air defense capabilities and 20 percent of Syria’s operational aircraft,” reads a Department of Defense statement issued on April 10.

The Pentagon has claimed that the Syrian government has lost the ability to refuel or rearm aircraft at the Shayrat airfield, and at this point, use of the runway is of idle military interest. While the cruise missile strike was not a knock-out blow, the idea was to deter the Syrian regime from using chemical weapons as part of a “proportional response.” "The Syrian government would be ill-advised ever again to use chemical weapons," Defense Secretary Jim Mattis said.

Despite the Pentagon’s assertions, it has been reported the at the Syrian air force is actively flying out of the base nonetheless—even if it is of “idle interest” to the Defense Department. The airbase’s runway was never targeted, and thus remains intact. The Shayat airbase hosted two squadrons of Su-22M3/M4 bombers and one squadron of Mig-23ML/MLD fighters—and it appears a good number of those jet survived the attack.

“These squadrons were distributed in three different parts of the airbase, and it looks like the missiles hit two out of three sectors. As a consequence, they got 5 Su-22M3s, 1 Su-22M4, and 3 Mig-23ML fighters for a total of 9 aircraft destroyed (the Pentagon claimed 20, but so far, we can only count 9, then subsequently in a recent press release the Pentagon changed the story to 20% of Syrian air power destroyed.),” Center for Naval Analyses military analyst Michael Kofman wrote in his personal blog. “The squadron of Su-22s located in the northwest of the base seems largely untouched, which is why one of the planes was shown on video launching from the base within the same day.”

If Kofman’s count of nine aircraft is destroyed is correct and the Pentagon’s assessment that it destroyed 20 percent of Syria’s airpower is also on target, we can assume due that the Assad regime has 45 operational combat aircraft left in its inventory. That means that years of war has taken a severe toll of the Syrian air force, which had 461 fixed-wing combat aircraft and 76 training aircraft in its inventory in 2011. But that is if the Pentagon’s damage assessment is not inflated—but that’s difficult to assess without seeing their data.