The Trans-Pacific Partnership: What Happens Now? 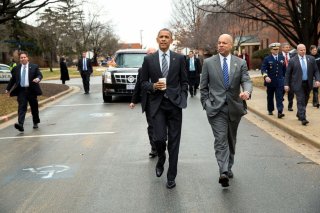 The Obama administration yesterday released the full text of the Trans-Pacific Partnership (TPP), arguably the “largest regional trade accord in history.” The release, coupled with Obama’s statement that he intends to sign the deal, triggers two of the timelines set up by Trade Promotion Authority (TPA) legislation that Congress passed back in June.

The first is the ninety-day clock. TPA requires the president to wait ninety days after announcing his intent to sign a trade deal before actually signing it. So while the United States and its eleven negotiating partners announced exactly one month ago that they had struck a deal, it’s still awaiting signatures. Indeed, the text is still being translated into French (for Canada) and Spanish (for Chile, Mexico, and Peru), and the lawyers might still make some technical corrections.

The second timeline is a sixty-day clock. TPA requires that the terms of any trade deal be made public for at least sixty days before Congress can consider it. Because the administration released the text at the same time it announced its intent to sign the deal, the sixty-day clock has no practical effect.

Does this mean that Congress will be taking up the legislation needed to implement TPP come early-February? Not quite. With the sixty-day clock already satisfied by then, Congress certainly could begin considering TPP once Obama signed it. But TPA does not require it to. Instead, the decision on when to formally begin deliberations rests with congressional leaders. Once they introduce the implementing legislation, Congress will have at most ninety days to hold an up-or-down vote. The legislation can’t be filibustered or buried in committee, so the common ways in which legislation gets killed on Capitol Hill won’t apply in this case.

How quickly congressional leaders will move on TPP will depend partly on when the administration will have the implementing legislation ready. TPP is a big, complex document, and the implementing legislation likely will be as well. Even more important, congressional leaders (and the administration) will be looking to see if the votes are there to pass TPP.

On that score, TPP is heading into the stiff political winds of Campaign 2016. Hillary Clinton, who once championed TPP, now opposes it, at least in its current version. Many Democratic lawmakers are feeling pressure to follow her lead. That pressure will likely grow as we move closer to Election Day. Republicans historically vote overwhelmingly for trade deals. But several GOP presidential candidates oppose TPP and the enthusiasm in GOP ranks for giving Obama a major legislative victory is low.

So don’t be surprised if a vote on TPP gets kicked into a lame-duck session or even into next year and a new administration. That would undoubtedly generate a lot of lamenting about American political dysfunction and the damage being done to U.S. leadership in Asia. But don’t despair. There is precedent. NAFTA was signed in the waning days of George H.W. Bush’s presidency, and Congress didn’t approve it for a nearly a year. Bill Clinton and not Bush got to sign the final bill.