The Ultimate 'Battleship' Dual: America's Iowa-Class Battleship vs. the Stealth Zumwalt (Who Wins?) 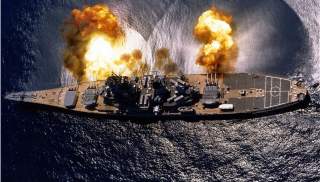 The USS Zumwalt is going to win this battle in almost any conceivable scenario. This is not surprising; Zumwalt will enter service over seventy years after Wisconsin. If we start the fight with different assumptions (without Zumwalt’s long range munitions, or without the Tomahawk Block IV), then things look rather better for the battleship, but the destroyer probably still inflicts serious damage and escapes.

This first appeared in July 2016 and is being reposted due to reader interest.