The Ultimate Guide to the SA-11 Gadfly 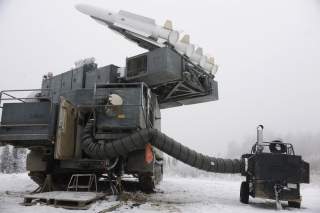 Editor’s Note: Harry Kazianis, Managing Editor of The National Interest, spoke with Ivan Oelrich, a former vice president of the Strategic Security Program at the Federation of American Scientists, and presently an adjunct professor of international affairs at George Washington University concerning the SA-11 Gadfly.

Kazianis: To begin, if you could, please describe in general terms the SA-11 Gadfly system. What it its primary role? How effective is it? What countries operate it? In general terms, does it have a good reputation in terms of combat capabilities compared to the competition?

Oelrich: The 11 is a mobile surface-to-air missile SYSTEM. The emphasis is to say that it is not a rocket, it is a radar for finding targets at a distance, a command vehicle, a launch vehicle that carries the rocket and a tracking radar. So normally the big radar would detect potential targets at a distance and then assign the target to one of a few launch vehicles. The tracking radar is not as powerful so it is helped by instructions from the surveillance radar, telling it where to look. Now it is far from the preferred approach but the launch vehicle can operate autonomously, using its radar for both surveillance and tracking.

It is a Soviet system so some ex-Warsaw Pact countries still have it but it was widely exported. The 11 is fairly old now. Most of the upgrades in air defense systems would be better resistance to jamming and other electronic countermeasures. The 11 would probably not be very effective against modern air forces, the US, Britain, France, and a few others but airliners don't have radar jamming equipment, even radar warning alarms, they fly straight and level at constant speed so even an old radar will be perfectly capable against such an easy target.

Kazianis: How much more capable is this system as opposed to, say, a shoulder-fired weapons, or a MANPAD?

Oelrich: There are two major differences. First, by definition, MANPADS have to be light enough for a person to carry. This limits fuel and, hence, range and altitude. No MANPADS could reach the cruising altitude of an airliner. Second, MANPADS are not as tightly linked into an air defense net as an 11 should be but, in this case, probably was not.

Kazianis: In terms of air defense systems, there are other more advanced systems like the S-300 or S-400. What is the difference between the SA-11 and say the S-300?

Oelrich: There are a lot of systems more advanced than the 11. The Russians have upgraded the 11 to a more modern 17. The 300, and its latest version, the 400, are more sophisticated still and, again, a system. The 300/400, for example, combines missiles of different ranges, so some are optimized for long-range attack but, if the attacker gets though that line of defense, it is engaged with smaller missiles optimized for close in defense.

Kazianis: There is also a updated version of the SA-11, the SA-17. What are the main differences between them?

Oelrich: Slight changes in the rocket. But the rocket is the easy part. Mostly, the difference is in more sophisticated radars and electronics to make the missile less vulnerable to radar jamming and other countermeasures. Very important on a modern battlefield, but moot when shooting down helpless civilian airliners.

Kazianis: In your own estimate, how long would it take for a crew to become proficient to use the SA-11 or SA-17? Could someone with, say, just a week’s or a month’s training be able to use such a system?

Oelrich: Ah, that is the point! Remember, this is just part of a system. It takes many months of training for the system to work. Central command centers with long-range radars get information on incoming attackers, they have to alert local surveillance radars, these guys have to find, and identify, potential targets, distinguish friend from foe and then pass that information on to launchers and assign them targets. They have to maintain very strict discipline with use of the radar. Every second the radar is on, the ground crew is broadcasting a message to every enemy airplane within hundreds of miles saying, "Please come bomb me!" The launch teams have to find the targets assigned to them, and no others, and engage them. For all that to work smoothly, everybody has to do a perfect job with extremely fast reaction times (remember that enemy aircraft may be approaching at greater than the speed of sound and their very first priority will be attacking the air-defense network, so thinking about it for a while is not an option) and it would take many months, years, to get all the crews trained up and operating seamlessly. In fact, only the most highly trained militaries can do it well at all. But your question is misleading. Obviously, based on the results, this crew was NOT proficient. For example, they apparently did not know how to operate the IFF equipment, or didn't care enough to bother. I am guessing here, but it might be possible that a crew could be taught to use the system badly, very badly indeed in this case, in just several hours.

Oelrich: See above. The radar on the tracker would not normally be used alone but it can be. Even so, I do not know specifically, but would be astonished if the radar on the launcher did not have an IFF interrogator. If you want to learn more than you ever thought you needed to know about IFF systems, you can read my OTA report on friendly fire.