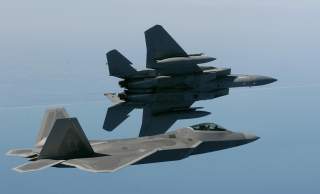 JSTARS is able to acquire and disseminate graphic digital map displays, force tracking information and – perhaps of greatest significance – detect enemy activity; information obtained can be transmitted via various data-links to ground command and control centers and, in many instances, connected or integrated with nearby drone operations. The Northrop E-8C surveillance aircraft can identify an area of interest for drones to zero in on with a more narrow or “soda-straw” sensor view of significant areas below. JSTARS can detect enemy convoys, troop movements or concentrations and pinpoint structures in need of further ISR attention.

Flying thousands of feet in the sky and zooming sensors in on enemy movement below, the Air Force manned Joint Surveillance Target Attack Radar System has been using advanced technology to gather and share combat-relevant information, circle above military operations and share key Intelligence, Surveillance and Reconnaissance data with service command and control.

The JSTARS mission is of such significance that the Air Force is now evaluating multiple industry proposals to recapitalize the mission with a new, high-tech, next-generation JSTARS plane to serve for decades into the future.

However, while Air Force officials tell Warrior the service plans to continue its pursuit of a new JSTARS platform, service weapons developers now say the Air Force is contemplating the prospect of developing different systems, platforms or technologies better equipped to perform the JSTARS mission in high-threat environments.

The circumstance has left many to wonder about just what kind of path forward the Air Force will ultimately pursue when it comes to its longer-term aerial battlefield surveillance mission.

"The Air Force remains in source selection for a follow-on to JSTARS as we continue to evaluate alternative approaches for battlefield command and control that could be more effective in high-threat environments.  In the meantime, we plan to continue flying the current JSTARS fleet through fiscal year 2023," Capt. Emily Grabowski, Air Force spokeswoman, told Scout Warrior.  "Although we are exploring options, there are many steps still to be taken before any force structure proposals are included in the 2019 budget."

In the meantime, as Grabowski indicated, the Air Force is aggressively advancing efforts to ensure that the existing JSTARS fleet of 16 aircraft remain current, upgraded and able to function in high-threat combat circumstances.

"Over the last 30 years, we have incorporated about 27 different capabilities. Ultimately, the fleet has flown over 130K combat hours since 9/11. It is an in-demand platform and we will make sure it stays in demand," Bryan Lima, director of manned C2 ISR business, JSTARS, told Warrior in an interview.

Lima expounded upon this to specify a handful of communications and sensor upgrades along with ISR technologies engineered to address lower, slower moving targets, described as LSS. Newer methods of data exploitation, Lima articulated, enable operators to better understand and classify what they are looking at.

"We believe we can address many emerging threats with the current fleet," Lima said.

The Northrop E-8C surveillance aircraft can identify an area of interest for drones to zero in on with a more narrow or “soda-straw” sensor view of significant areas below. JSTARS can detect enemy convoys, troop movements or concentrations and pinpoint structures in need of further ISR attention.

In an interview with Scout Warrior earlier this year, Lt. Gen. Arnold Bunch, Military Deputy, Office of the Assistant Secretary of the Air Force, Acquisition, said the service has upgraded some of its existing fleet of J-STARS but still needs to develop new technology for the future.

While Air Force officials did not elaborate much on the various future threat conditions currently informing the calculus of decision-making, there has been much discussion of a broader need for air surveillance assets to operate in a more contested, high-threat, near-peer type warfare environment. Given these dynamics, broadly speaking, it makes sense that a larger, and therefore more detectable platform like JSTARS could be a more vulnerable target against adversaries with sophisticated weapons and sensors. Accordingly, while JSTARS functions with great effect in lower threat combat circumstances, such as Afghanistan, where the US maintains air supremacy, its size, configuration and radar signature are such that it could potentially be more vulnerable to advanced enemy air defenses.

At the same time, the platform is known to add tremendous value in combat scenarios - and advances in aircraft defenses, countermeasures, electronic warfare and newer sensor technology, it seems, could potentially enable JSTARS to operate successfully against sophisticated enemy air-to-air weapons and ground-based air defense systems. Clearly, the aircraft is not intended to fly at the edge of combat, unprotected, against enemy fighter jets and air defenses - the question is what kinds of assets, emerging systems or supplemental technologies might be leveraged to expand its mission functionality in more contested areas?

An ability to address a high-threat electromagnetic warfare environment, by any estimation, is a likely focal point of the calculus regarding how best to equip large sensor platforms - such as JSTARS -  for future combat environments.  While many details regarding these kinds of technologies are, naturally, not available, engineering and upgrading an aircraft such as JSTARS with EW countermeasures or systems designed to minimize its electronic "signature" could indeed be fundamental to an ability to operate in sophisticated near-peer types of warfare scenarios.  Of course Lima did not address these questions, however, EW is clearly center stage with US military weapons and technology developers.  Additionally, it may be that other kinds of advanced countermeasures and aircraft protections, including the use of nearby unmanned drones as protection, could prove useful with respect to upgrading JSTARS to operate against advanced enemies.

There are other potential considerations or likely reasons why an upgraded current JSTARS aircraft might be positioned to operate with some success against sophisticated modern enemies; attack aircraft or stealth bombers could eliminate air defenses before a JSTARS enters a high-threat area of operation, thus enabling it to operate with great effect -- electronic jamming aircraft such as the EA-18 Growler equipped with a high-tech Next-Generation Jammer, also, could potentially detect and jam radar signals from enemy air defenses - and semi-autonomous drones operated from a JSTARS cockpit in the future might test enemy air defenses or assess the threat environment while the surveillance aircraft operates at a safer distance.  JSTARS is specifically engineered to survey wide areas at great distances.

Moving into the future, there may be emerging assets able to perform these missions more effectively against extremely advanced enemies; newer EW and sensor technology, for instance, are rapidly evolving such that smaller, better protected platforms might have occasion to track wider areas at increasingly longer ranges - all while maintaining a lower radar signature. Faster computer processing speeds, enabling a smaller hardware footprint - coupled with more "hardened" networks and data links - might enable smaller, new platforms to gather, organize, analyze and disseminate crucial, combat-relevant information in near real-time. In short, command and control technology is evolving so quickly, that the Air Force might wish to ensure it can consistently identify and leverage the best emerging technical solutions able to perform the requisite surveillance and command and control functions currently executed by legacy JSTARS planes. This could lead to an enhanced, new JSTARS recap platform - as is the current plan - or some kind of modification.

Given the aforementioned sphere of technological possibility, there does appear to be ongoing inquiry into the question of whether a different platform or technical system might succeed in performing the JSTARS mission more effectively in contested, near-peer or higher-threat environments. Would emerging drone surveillance technology, historically thought of as providing a "soda-straw" view of areas below, be able to survey wide-swaths of dispersed terrain across a combat area of operations? Perhaps stealthy platforms, increasingly equipped with advanced sensor technology, could perform some of the wide-area command and control missions currently taken up by the JSTARS. It may be that a new JSTARS platform could operate in tandem with other systems, networks and aerial platforms able to assist the mission in higher-risk environments.

The Air Force plans for new JSTARS to be operational in 2024.