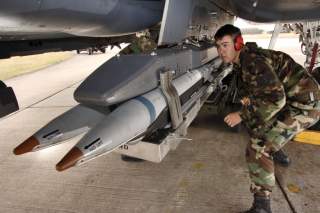 The Air Force's Small UAS Roadmap is expected to increase use of small drones as explosives to attack enemy targets.

The Air Force is advancing plans to retire its Predator drone by transitioning more missions to the larger Reaper and rapidly increasing its fleet of small drones to blanket enemy areas with Intelligence, Surveillance and Reconnaissance assets, jam enemy air defenses and potentially use drones as small explosives designed to overwhelm enemy targets with fire power.

The Air Force recently unveiled a Small UAS Road Map which, among other things, calls for the increased use of smaller drones to accomplish missions now performed by larger ones. This includes initiatives to explore algorithms which allow for swarms of mini-drones to perform a range of key ISR and combat functions without running into each other, Brig. Gen. John Rauch, Air Force Director of Intelligence, Surveillance and Reconnaissance, told Scout Warrior in an interview.

Having numerous drones operating in tandem creates a redundancy which is significant as it increases the likelihood that a mission can still succeed if one or two drones are shot down by enemy fire.

A small class of mini-drone weapons already exist, such as AeroVironment’s Switchblade drone designed to deliver precision weapons effects. The weapon, which can reach distances up to 10 kilometers, is engineered as a low-cost expendable munition loaded with sensors and munitions.

Air Force strategy also calls for greater manned-unmanned teaming between drones and manned aircraft such as F-35s. This kind of effort could help facilitate what Defense Secretary Ashton Carter has said about mini-drones launching from a high-speed fighter jet.

Along these lines, Rauch talked about a “loyal wingman” concept wherein larger platforms such as an F-35 or F-22 will be able to control a fleet of nearby drones, drawing upon rapid advances in autonomy and computer technology.

“Teaming is where you might put a couple of different platforms and use them together to perform something. The loyal wingman concept will make an extension of the same aircraft,” he explained.

Part of the progression of this technology incorporates a transition from the current circumstance wherein multiple operators control a single drone to a situation where one human is performing command and control functions for a number of drones simultaneously.

The new Block 50 will also include auto take-off-and land, within and beyond line of sight capability and an ability to use “open architecture” to integrate new software as technologies emerge, Rauch said.

The Air Force is advancing plans to retire the Predator drone by transitioning pilots to the operation of its larger Reaper drone – all while developing small drone technology and expanding technology and mission scope for the Reaper itself, service officials said.

“As we sundown Predator, we will train people from one system to the next to focus on Reaper. The current members that are flying Predators will transition from Predator to Reaper,” Rauch said.

This trajectory for the Reaper is evolving alongside a separate effort to harness increasingly smaller, lighter-weight sensors, transmitters and receivers.

In addition, as technology continues to progress and lead to the miniaturization of sensors, receivers and transmitter and lighter materials, smaller drones are increasingly expected to perform those larger missions currently reserved to large drone platforms.

However, this developmental phenomenon is not likely to lead to a replacement for the larger, weaponized Reaper anytime soon – given its importance to strike and reconnaissance missions.

At the same time, Rauch did say the evolution of drone technology will likely lead, ultimately, to a new platform which will replace the Reaper over time.

Over time, the Air Force plans to upgrade the software as well as the arsenal for the Reaper, giving it a wider range of weapons and mission sets.

The idea is to further engineer the Reaper with what’s called “open architecture” such that it can easily and quickly integrate new weapons and technologies as they emerge.

“There are some composites that allow for lighter weight engines that are coming along for power and thrust output. Also, what they might burn can save a lot of fuel – and offer the hope of something miniature able to do theater wide ISR and not just over the next hill,” Rauch said.

Rauch added that the Air Force is now working through various kinds of sensor developments from the largest drones to the smallest ones, analyzing weight, power and sensor fidelity issues.

“Weight starts causing an issue. We will give it an arsenal that rounds out that will be done as test time is available. JDAM is something that is within that realm and AIM-120 changes air to air engagements,” Rausch added.

The Air Force Military Deputy for Acquisition told Scout Warrior in an interview that the service has begun the process of adding new weapons to the Reaper, a process which will likely involve engineering a universal weapons interface.

“We are looking at what kind of weapons do we need to integrate in. We're looking at anything that is in our inventory, including the small diameter bomb. We're working to get universal armament interface with an open mission systems architecture,” Lt. Gen. Arnold Bunch told Scout Warrior several months ago.

There are many potential advantages to adding to the arsenal of weapons able to fire from the Reaper. These include an ability to strike smaller targets, mobile targets or terrorists, such as groups of enemy fighters on-the-move in pick-up trucks as well as enemies at further ranges, among other things.

Drone attacks from further ranges could reduce risk to the platform and help strikes against Al Qaeda or ISIS targets to better achieve an element of surprise. Furthermore, an ability to hit smaller and mobile targets could enable the Reaper drone to have more success with attacks against groups of ISIS or other enemy fighters that reduce the risk of hurting nearby civilians. Both ISIS and Al Qaeda are known for deliberately seeking to blend in with civilian populations to better protect themselves from U.S. drone strikes.

One new possibility for the Reaper drone could be the addition for the GBU-39B or Small Diameter Bomb, Bunch said.