The U.S. Air Force's Most Lethal Weapon of War Is Getting a Massive Upgrade 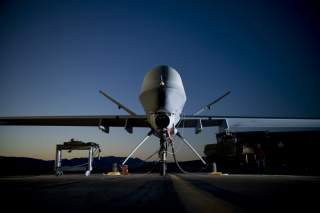 The Air Force is upgrading its entire fleet of MQ-9 Reaper drones in order to give them much more endurance to stay above key strategic areas and conduct surveillance and strike missions, service officials told Scout Warrior.

The Reaper is a large, armed drone with a 66-foot wingspan in service around the globe. The upgrades, called the Reaper Extended Range, in include the addition of two 1,350-pound fuel tanks.

The Reaper ER is intended to substantially increase and build upon the current 4,000-pound fuel capacity of the drone with a range of 1,150 miles, Guillebeau added.

Equipped with electro-optical/infrared sensor cameras, a laser illuminator, Hellfire missiles and GPS-guided precision bombs – the Reaper is engineered to attack time-sensitive targets as needed, she explained.

While Air Force officials emphasize that the upgrades will enable the drone to perform missions around the globe, the increased fuel capacity is expected to be of particular relevance in the Pacific.

Often referred to as the “tyranny of distance,” the large geographical expanse in the Pacific presents challenges for what’s called “long-dwell” intelligence, surveillance and reconnaissance, or ISR – namely the ability to maintain drone or aircraft sensors over key, combat-relevant areas for long periods of time.

The Air Force currently operates roughly 104 MQ-9 Reapers and the service plans to upgrade all of them.