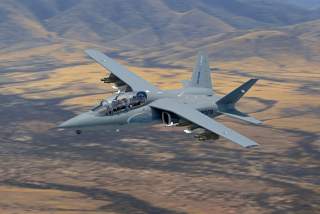 Firing laser-guided rockets at enemy ground locations, dropping precision-guided bombs from thousands of feet up in the air and coordinating closely with ground-attack controllers to identify targets, Light Attack aircraft being evaluated by the Air Force for combat missions after conducting a wide range of operational scenarios last summer at Holloman Air Force Base, N.M.

The combat scenarios were part of experimenting with the a range of missions sets likely to be needed in attacks against terrorist fighters and other instances where the US Air Force has air supremacy - but still needs maneuverability, close air support and the ability to precisely destroy ground targets.

Air Force officials familiar with the experiment provided Scout Warrior with a detailed breakdown of the mission scenarios now being evaluated:

The emerging OA-X Light Attack aircraft is envisioned as a low-cost, commercially-built, combat-capable plane able to perform a wide range of missions in a less challenging or more permissive environment.

While several news reports have indicated that the Air Force was very impressed with the technical maturity of the commercial offerings, service officials themselves are not yet ready to comment upon initial findings.

"The final experimentation report and associated recommendations are in development and will be deliberated by senior leaders when complete," Capt. Emily Grabowski told Scout Warrior in a written statement.

The idea is to save mission time for more expensive and capable fighter jets, such as an F-15 or F-22, when an alternative can perform needed air-ground attack missions – such as the current attacks on ISIS.

During the first week of the experiment, Air Force pilots flew basic surface attack missions in Textron Aviation's AT-6 Wolverine turboprop, as well as in Sierra Nevada Corp. and Embraer's A-29 Super Tucano, an Air Force statement said.

Depending upon the performance of the aircraft, it is quite likely one of the offerings could soon be sent to perform combat missions in the ongoing war against ISIS, Lt. Gen. Arnold Bunch. Military Deputy, Office of the Assistant Secretary of the Air Force, Acquisition, told Scout Warrior in an interview earlier this year.

The Light Attack effort is designed to bring near-term, combat-ready technology to current conflict; its low-cost and potential mission-enhancing characteristics has inspired support and attention from senior members of Congress - and is closely followed by Air Force leaders who have been visiting and observing the experiment at Holloman.

“We’re experimenting and innovating, and we’re doing it in new and faster ways,” Secretary of the Air Force Heather Wilson said in a written service statement. “Experiments like these help drive innovation and play a key role in enhancing the lethality of our force.”

Light Attack aircraft, able to hover close to the ground and attack enemies in close proximity to US forces amid a fast-moving, dynamic combat situation, would quite likely be of substantial value in counterinsurgency-type fights as well as near-peer, force-on-force engagements. The combat concept here, were the Air Force to engage in a substantial conflict with a major, technically-advanced adversary, would be to utilize stealth attack and advanced 5th-Gen fighters to establish air superiority - before sending light aircraft into a hostile area to support ground maneuvers, fire precision weapons at ground targets from close range and even perform on-the-spot combat rescue missions when needed.

“This experiment is about looking at new ways to improve readiness and lethality,” Chief of Staff of the Air Force Gen. David Goldfein, said in an Air Force report. “Working with industry, and building on the Combat Dragon series of tests, we are determining whether a commercial off-the-shelf aircraft and sensor package can contribute to the coalition fight against violent extremism."

US-trained pilots with the Afghan Air Force have been attacking the Taliban with A-29 Super Tucano aircraft.

The Super Tucano is a highly maneuverable light attack aircraft able to operate in high temperatures and rugged terrain. It is 11.38 meters long and has a wingspan of 11.14 meters; its maximum take-off weight is 5,400 kilograms. The aircraft has a combat radius of 300 nautical miles, can reach speeds up to 367 mph and hits ranges up to 720 nautical miles.

This emerging commercially constructed aircraft had its first successful flight in December of last year. Prior to this, the Scorpion successfully fired Advanced Precision Kill Weapon System rockets and AGM-114F Hellfire. The weapons were guided to their targets using first a ground-based laser designator system and then an airborne laser on the Scorpion‘s L-3 WESCAM’s MX-15Di sensor suite, a Textron statement said.

Textron has also announced Garmin as the avionics provider for the enhanced Scorpion. Textron information states that the newly configured G3000 avionics system include a large, high-definition display complemented by two high-definition touch-screen controllers and provides more mission capability in the forward cockpit position, additional navigation capability in the rear cockpit position and overall weight savings for improved performance as a multi-mission aircraft.

In addition, changes to the Scorpion airframe include four degrees of sweep to the wings, an enhanced aft horizontal stabilizer for improved high-speed performance, a simplified landing gear design, a next-generation Heads Up Display and hands-on throttle and stick controls, Textron data states.

The AT-6 is a multi-role light attack aircraft. It uses a Lockheed A-10C mission computer and a CMC Esterline glass cockpit with flight management systems combined with an L3 Wescam MX-Ha15Di multi-sensor suite which provides color and IR sensors, laser designation technology and a laser rangefinder