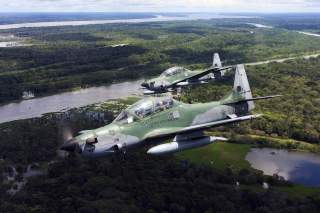 The two companies will submit the A-29 Super Tucano counter-insurgency aircraft—which the Air Force had previously selected for its Light Air Support program in 2013 to equip the Afghan Air Force—for the demonstration effort. The OA-X Capability Assessment of Non-Developmental Light Attack Platforms will begin this July at Holloman Air Force Base, New Mexico.

“SNC is proud to participate in the USAF's effort to enhance warfighter support and bring greater value and affordability to the American taxpayer,” Taco Gilbert, senior vice president for SNC´s Intelligence Surveillance Reconnaissance (ISR) business area, said in a May 12 statement. “Partnering with Embraer, we’re proud to present the U.S.-made, combat-proven A-29 as part of this experiment.”

The OA-X assessment may eventually lead to a U.S. Air Force program of record and an eventual tender to buy a light attack aircraft. At present, the OA-X experiment is part of an Air Force initiative to explore the pros and cons of buying a new light attack aircraft for the close air support role and for other missions in permissive and semi-permissive environments.

The Air Force is currently using expensive high-performance fourth and even fifth-generation fighters to perform those sorts of missions, which is not only massive overkill but also consumes precious airframe life on those jets. Moreover, it is extremely expensive to use an Boeing F-15E Strike Eagle that costs roughly $27,000 per flight hour or a Lockheed Martin F-35A Joint Strike Fighter, which costs roughly $42,000 per flight hour, to bomb poorly armed insurgents. An OA-X might only cost between $4000 and $5000 per flight hour, dramatically reducing costs.

The OA-X aircraft might also be used to reduce some of the Air Force’s fighter pilot training costs and help to accelerate pilot seasoning—alleviating some of the burden from the service’s increasingly decrepit fleet of Northrop T-38A Talon advanced jet trainers. The idea behind the OA-X is that the new light attack aircraft would allow the Air Force to accomplish those missions while preserving and extending the service lives of its other combat aircraft.

Sierra Nevada and Embraer’s pitch is that the A-29—which the Air Force picked for its earlier LAS program—already has an existing military type certificate and, as such, would be incredibly easy for the service to adopt. The aircraft was also derived from a trainer, and as such, is ideal for helping to increasing pilot proficiency.

“The A-29 is uniquely suited for training and seasoning fighter pilots,” Jackson Schneider, president and CEO of Embraer Defense & Security said in a statement. “This means more highly-trained pilots more quickly and less expensively, while allowing other platforms to do the work they do best.”

The two companies are quick to point out that while the Super Tucano was developed in Brazil, it is currently manufactured in Jacksonville Florida. Indeed, rival Texton used the A-29’s foreign origin against Sierra Nevada and Embraer during the bitter LAS competition. The Super Tucano prevailed in the end, but intense Textron lobbying successfully truncated the LAS program, which will likely end after only 20 aircraft are built.

Indeed, if the OA-X effort does proceed to become a full-scale acquisition program, Textron—which is also participating in the demonstration with its Scorpion light attack jet and AT-6 turboprop attack aircraft—is certain to attack Super Tucano because of its South American origins. For Textron, the OA-X is likely its best—and possibly only shot—at ever selling its Scorpion light attack jet to a paying customer.

However, that being said, there are real doubts as to how serious the Air Force is about the OA-X program. The current effort is the second iteration of OA-X after a previous iteration of the program in 2008 came to naught. While many airpower advocates insist that the Air Force is serious this time around, history has shown time and again that the service prefers big, complex and expensive combat aircraft like the Lockheed Martin F-35 Joint Strike Fighter and will sacrifice almost anything to fund those programs.