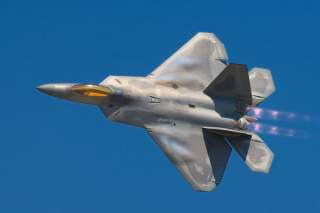 The idea hasn’t gotten beyond the Duffel Blog and this column, but what if the USAF had long ago dropped the F-35A? As I noted last month, had the Pentagon foregone developing a wholly new fighter jet, the $100 billion it has spent to date on the F-35 project would have bought about 740 Eurofighter Typhoons. Euro-anything, of course, is hardly the USAF’s style, and the War Department hasn’t bought a French fighter since 1918. Doing so today is about as likely as Rob Farley getting a “Friend of the Air Force” award from General Welsh. So what else might the USAF have done? As a first-order vignette in this alternative history, let’s assume that former Defense Secretary Robert Gates wouldn’t have ended the F-22 program in 2009 at 187 aircraft. That said, the answer was never just a lot more F-22s.

The first problem is procurement and operating costs. The USAF might have aimed for the 322 that it had wanted for much of the 2000s. Indeed, half that $100 billion could have bought them. The trouble is that the Pentagon couldn’t have indefinitely afforded those aircraft—the F-22’s size, twin engines, and low observability maintenance requirements mean operating costs of about $44,000 per flight hour. Much of that cost is fixed, and admittedly spread over a relatively small fleet; the incremental cost may be just half that. Just how much or little is impossible to know without auditable accounts, but an F-22 was never going to cost as little to operate as an F-16.

The second problem may be over-investment in a particular style of warfighting. The complaint that the F-35 is much less maneuverable than the F-22 has persisted for years. Editorializing in The West Australian just last month, Dennis Jensen of the Australian Federal Parliament again asked whether it was “time to remember the Vietnam air war lesson”—how F-4s with radar-guided missiles, though intended as standoff killers, had to fall back on dogfighting MiGs when those missiles didn’t work. But in The National Interest the next day, Andrew Davies of the ASPI offered the counterpoint: air battles over Vietnam actually were mostly about missiles, not guns. The Phantoms just had trouble getting into firing position. With modern all-aspect missiles, firing position is basically anywhere within physical range—and that’s longer from straight ahead, where the missile takes advantage of the relative closure speed. Indeed, as John Stillion of the CSBA showed with his recent study on air-to-air combat, most aerial engagements these days are face-shots. Almost no one has fought dogfights for decades, and aerial cannons are used about as often as bayonets.

Bombs are used a lot, however, and on the margin, $150 million is a lot of money for an airplane that can drop just two thousand-pounders. That revisits the first problem—the F-22 is so expensive both because it’s stealthy and such a dogfighter. Building a radar-evading aircraft with control surfaces that large necessarily means building a big aircraft. As Stillion wrote, the consistently more powerful engines and stronger aero-structures of fighters have meant aircraft that are faster, higher-flying, and more maneuverable, but also “an almost unbroken trend toward ever-higher aircraft empty weight”—and thus greater cost. After spending money on more F-22s, the USAF may not have sought the capability of another huge and agile dogfighter, but the capacity of more air-to-ground bang for the million bucks.

Had the Pentagon not pursued the F-35, the USAF today might have those 322 F-22s, but an old fleet of A-10Cs, F-15C/Es, and F-16C/Ds. The A-10Cs might plausibly not have attracted quite as much opprobrium from the brass as soon as they did. But the generals would be all the more worried about the survivability of all those older aircraft against long-range anti-aircraft missiles. Lockheed’s mooted idea of an FB-22 might have gotten more traction. The current project for a new long-range stealth bomber might have gotten going earlier. But someone by now also would have pitched another stealthy light bomber.

This strike aircraft concept certainly would have come without a lift fan, as a joint project with the USMC was clearly never going to produce that kind of plane. The aircraft would thus have come with that bubble canopy, whether it’s needed anymore or not. With less heed paid to dogfighting at all, the designers might have de-emphasized speed and maneuverability, and aimed for longer range. It could still have been a joint project with the Navy (whatever RAND says), as the scar weight for arrested landings might have been reasonable. That could have produced the long-range light bomber that the Navy finds itself needing now in the Pacific, and the USAF will wish it had there too. Maybe then, with the right marketing, the JSF could have been the JSA—the Joint Strike Aircraft—just without all the hand-wringing about what sort of dogfighter it is.