The US Air Force’s XF-85 Goblin: The Scary 'Parasite' Fighter 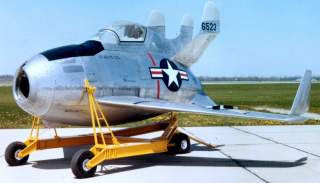 Yes, the title stinks. But I love — love — Steve Pace’s The Big Book of X-Bombers and X-Fighters, out now from Zenith Press. “It takes a brave author to write a comprehensive review of every turbojet-powered Air Force fighter and bomber, produced or not,” Walter Boyne, himself a famous author and pilot, writes in the foreword of Pace’s thick, lavish tome.

I couldn’t agree more. X-Bombers and X-Fighters is too exhaustive to review in the conventional way. So I’m not going to bother trying. Instead, this week I’m going to spotlight a few of the shiniest gems of aeronautical design among the many dozens in Pace’s giant, beautiful book.

Buy it. You’ll be glad you did. And now for my second installment …

In the late 1940s, the new B-36 bombers was the U.S. Air Force’s pride and joy. The largest mass-produced piston-engine aircraft ever made, the B-36 boasted the longest wingspan of any combat aircraft ever — 230 feet. With a range of 10,000 miles and a bomb load of up to 44 tons, the B-36 was the world’s first bomber with an unrefueled intercontinental range.

But the Air Force feared sending B-36s into combat without fighter protection. And no fighter then in development could keep up with the giant bomber on their staggeringly long flights across oceans and continents. This was, after all, before aerial refueling became standard practice.

So the flying branch pitched ideas to industry, “most bordering on the ridiculous,” Pace writes. Among the worst ideas — equipping a B-36 with a tow cable and having the bomber drag a fighter behind it, releasing the smaller plane near the target zone “to fend off the enemy.” If the fighter survived, it would somehow reattach to the B-36.

“This retrieval part of the plan was never figured out,” Pace explains, “not to mention the problems associated with the bomber’s drag increase from towing a fighter behind it, and making the fighter behave aerodynamically in the B-36’s slipstream.”

Fortunately, the Air Force came up with a somewhat more realistic scheme. Design a jet fighter small enough to fit inside the B-36’s cavernous bomb bay. That way, a formation of B-36s could carry its own escort planes internally, launching them to defend against air attack and retrieving them afterward.

The Air Force called it the “parasite fighter.” Its dimensions were limited by the size of B-36’s bay. It could be no longer than 15 feet, no taller than nine feet and possess wings no longer than five feet across when folded up. The parasite should weigh no more than three tons and carry four machine guns. It should fly up to 600 miles per hour … for one hour.

McDonnell Aircraft Corporation was the only contractor willing to work within those constraints. The company’s engineers took a Westinghouse J34 jet engine and added a tiny cockpit right on top, plus similarly diminutive wings that folded vertically. “The XF-85 was essentially a flying engine nacelle,” Pace quips.

The B-36 was still in development and none were ready for testing when McDonnell finished the two XF-85 prototypes and the Air Force accepted them for trials in the summer of 1948, so the testers modified a B-29 to serve as a B-36 surrogate, fitting the wartime bomber with an extendable trapeze that cradled, launched and retrieved the parasite fighter.

Flight tests beginning in July 1948 were … less than stellar. Separation was fairly straightforward, but on Aug. 22 test pilot Ed Schoch discovered firsthand how hard it can be to reattach one moving aircraft to another. “He failed to dock on his first attempt, and as he closed in on his second attempt, the trapeze’s bridle hit the upper part of the cockpit canopy,” Pace writes. “The canopy shattered, and the bridle knocked Schoch’s helmet and oxygen mask off, shocking him temporarily.

“Before Schoch regained control of the falling plane, it had dropped several thousand feet.” The pilot landed on the ground rather than attempt another mid-air hook-up. Aerial refueling developed quickly and rendered the parasite fighter concept entirely moot. The B-36 retired in 1959, having never seen combat.
This piece first appeared in WarIsBoring here.