The U.S. Army Defeats Itself More Often Than All Its Enemies Combined 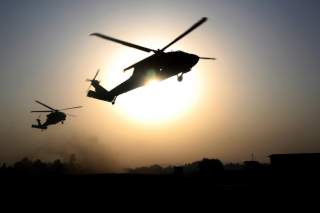 The U.S. Army is one of the most lethal fighting forces in the modern world. In 1991, it demolished the Iraqi Army in 100 hours. In Operation Iraqi Freedom, the U.S. Army marched to Baghdad in 18 days. The ratio of enemy combat vehicles destroyed to losses suffered by U.S. and coalition forces in both Iraqi wars was stunningly lopsided.  Both in Iraq and Afghanistan, the U.S. Army has shown a remarkable capacity to dominate across a large part of the conflict spectrum. Even the much-feared improvised explosive device (IED) threat was reduced to a manageable level through the amazing efforts of Joint Improvised Explosive Device Defeat Organization (now Joint Improvised-threat Defeat Agency) and a host of government laboratories and, most important, private contractors.

Unfortunately, the Army has shown itself to be equally lethal when it comes to starting and then killing major acquisition programs.  Over the past thirty years, the U.S. Army has cancelled some 20 major acquisition programs including armored fighting vehicles, helicopters, artillery pieces, communications systems, infantry weapons and munitions. If you count designs that never got out of the research and development (R&D) process that number more than doubles.

Most people are familiar with the more recent debacles: the Ground Combat Vehicle, Future Combat System, Comanche helicopter, Crusader self-propelled artillery, armed reconnaissance helicopter and the Land Warrior communications system. But there are others; many others. The Army has been trying to find a replacement for the M551 Sheridan, its last light tank, that retired in 1997.  By some counts there have been more than a half dozen attempts over the past twenty odd years to resurrect the capability, all dismal failures. Now we are back at it again with the idea for Mobile Protected Firepower platform for the Infantry Brigade Combat Teams.

According to a 2011 review of Army Acquisition, between 1998 and 2011, the Army spent more than $1 billion dollars annually on programs that were ultimately cancelled. The Army’s Big Five mistakes – the Future Combat System, Comanche Helicopter, Crusader cannon, Brilliant anti-armor munition and the Ground Combat Vehicle -- cost the Army a total of $33 billion for nothing. The Army has a reputation for funding lots of R&D projects ever year. Yet, during this same period the Army spent between 22 percent and 34 percent of its annual Developmental Test and Evaluation budget on programs that were cancelled. The total loss of R&D resources on cancelled programs between 1985 and 2014 is estimated to be some $38.5 billion.

The good news story is that the Army is no longer a serial killer of acquisition programs. The main reason for this is that is has wiped out the eco-system, kind of like what the buffalo hunters did in the 19th century American West. The absence of major new start programs also reflected a change in the Army’s strategy for balancing forces, modernization and budgets. In essence, after 2011 and the withdrawal from Iraq, the Army chose to sacrifice end strength and modernization in favor of maintaining readiness and preserving funds for upgrading existing platforms and systems. This decision also means that systems such as the Bradley, Abrams, Apache and Black Hawks will be in the inventory until 2050.

The Army now faces a dilemma. On the one hand, the likelihood of a major conventional conflict is again on the rise. We could be at war with a great power or major regional actor within five years. The Chief of Staff of the U.S. Army, General Mark A. Milley, testified before Congress that he believes the United States and the NATO Alliance are facing a growing threat from an increasingly authoritarian, even militant, and well-armed Russia. This view was shared by both the current Chairman of the Joint Chiefs of Staff and his immediate predecessor. Russia as an adversary means a great power war, a scenario which the Pentagon has not focused on for almost 25 years. The Army no longer knows how to conduct electronic warfare for example, or operate in a communications denied environment. The last time the Army suffered a casualty due to enemy air attack was nearly 70 years ago. The need to address serious deficiencies in high-end combat capabilities in the near-term (five years, let’s say) is becoming an imperative.

On the other hand, the Army’s cupboard is about bare. There are almost no major programs underway to address gaps in combat capabilities against a near-peer opponent. One of the biggest new programs, absolutely necessary, is the replacement of Vietnam-era M-113s with a turretless variant of the Bradley. Nor does the Army have the time to start a major new program which will inevitably take 20 years from a requirements definition through full deployment.

The Army needs to focus like a hawk on what upgrades and innovations in can get into the force in the next five years. I can think of several. For example, there is a program underway to enhance the lethality of the Stryker Brigade in Europe with a new 30mm cannon in an automatic turret. But once the 81 vehicles are up gunned, the Army intends to wait three years before doing anything more for Stryker lethality. That’s bizarre. How about doing a brigade a year for the next five years?  Similarly, the Army has a limited test program for active protection systems for armored combat vehicles. The Army should commit now to deploy the best of these systems on several heavy and Stryker brigades now?

If the Army is likely to be on the receiving end of air and missile attacks, it needs to seriously up its air and missile defense game. This means moving ahead rapidly with its multi-mission launcher as well as a variety of payloads such as the miniature hit-to-kill missile. It should also acquire several brigade sets of the Israeli Iron Dome system. Advanced tactical laser defenses that can be mounted on existing vehicles and defeat rockets, artillery, mortars and unmanned aerial vehicles are just about there. Finally, how about taking advanced communications systems currently in production, the handheld radio that is the sole surviving piece of the old Joint Tactical Radio System program, and the unit-level WIN-T and buying sufficient numbers of both to equip all likely first deploying formations?